Pentagon denies US forces are on Syrian front lines despite photos 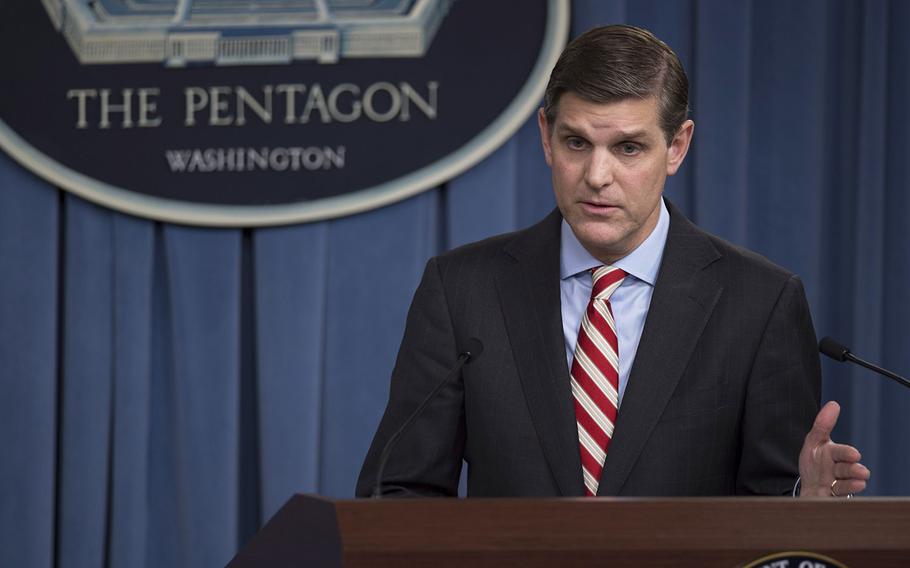 Pentagon Press Secretary Peter Cook conducts a press briefing with reporters at the Pentagon, May 26, 2016. Cook said that despite what newly-released photos seemed to capture, the mission for U.S. operators in Syria and Iraq remains the same. (Adrian Cadiz/DOD)

WASHINGTON – The Pentagon denied U.S. special forces are on the front lines with Kurdish soldiers fighting the Islamic State group after photographs surfaced Thursday of American troops in Syria on the ground advancing toward Raqqa.

Agence France-Presse reported and took photographs of the U.S. special operators manning gun trucks alongside members of the Syrian Democratic Forces in Fatisah, Syria, which is approximately 30 miles north of Raqqa, which is the Islamic State group’s capital in that country.

There are about 300 U.S. troops deployed to Syria for what the Pentagon and White House have described as a non-combat, training and advising mission. The U.S. forces are there to support several thousand Syrian Kurds and Arabs who are receiving equipment, logistical and airstrike support to help them take back territory held by the Islamic State group.

The Pentagon has also repeatedly said U.S. forces are operating in a dangerous place, though troops are not on the front lines. Instead, they are only advising and assisting behind the forward line of Syrian troops.

However, in the Agence France-Press report, a commander for the Syrian Democratic Forces said U.S. operators are “present at all positions along the front... They are taking part on the ground and in the air.”

Pentagon Press Secretary Peter Cook on Thursday would not discuss the content of the photographs or the story, citing operational security. But he did say, despite what the photos seemed to capture, the mission for U.S. operators in Syria and Iraq remains the same.

“That mission has not changed,” Cook said Thursday. “They are not on the forward line.”

Cook also said there was no specific measurement in defining what forward line means in terms of actual distance.

“Our forces in Iraq and Syria -- their instructions, their mission is clear – they are not at that leading edge. They are able to defend themselves,” he said. “But they have to be in a position to be able to provide the kind of advice and assistance needed to help … these local forces succeed.”

President Barack Obama announced in late April that he was sending an additional 250 special operators with support to Syria to augment the 50 U.S. operators already on the ground there.

“They’re not going to be leading the fight on the ground, but they will be essential in providing the training and assisting local forces that continue to drive [the Islamic State group] back,” Obama said at the time.

In some of the Agence France-Presse photos, the U.S. operators are wearing the patch of the People’s Protection Units, or YPG as they are commonly known, one of the Kurdish militias participating in the wider umbrella group called Syrian Democratic Forces.

After the photos surfaced, Col. Steve Warren, the Baghdad-based spokesman for Operation Inherent Resolve, said via Twitter that U.S. forces will often wear the patches of the forces that they are partnered with as a sign of solidarity.