Pentagon credits Russia with easing tensions between US, Iran-backed forces in Syria 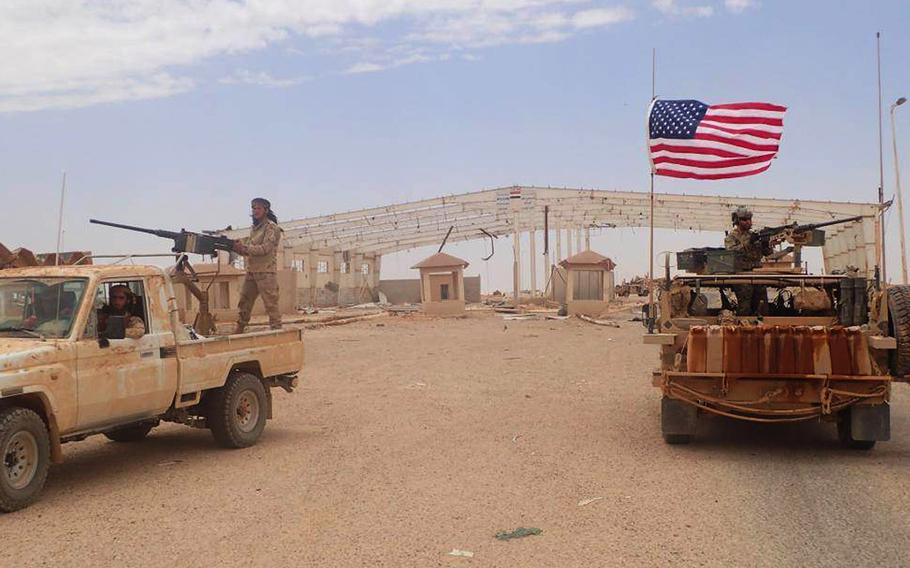 In this photo taken on Tuesday May 23, 2017, provided by the Syrian anti-government activist group, the Hammurabi's Justice News, which has been authenticated based on its contents and other AP reporting, shows a U.S.-backed anti-government Syrian fighter from Maghaweer al-Thawra standing on a vehicle with heavy automatic machine gun, left, as an American soldier also stands on his armored vehicle as they take their position at the Syrian-Iraqi crossing border point of Tanf, south Syria. (Hammurabi's Justice News via AP)

WASHINGTON – The Pentagon said Friday that tensions have dropped near a U.S. training base in southern Syria just one day after U.S.-led coalition troops attacked Iran-backed militiamen supporting the Syrian government for the third time in a month. U.S. defense officials credited an unlikely source – Russia.

“I think the calm we see today is largely due to their efforts,” Navy Capt. Jeff Davis, a Pentagon spokesman, said of the Russians. “They are trying to get the other parties -- the pro-[Syrian government], the Iranian-backed militias -- to do the right thing and to prevent them from taking actions that are destabilizing like we saw yesterday.”

On Thursday, U.S.-led forces attacked the militiamen as they attempted to reinforce an encampment close to a coalition training base in Tanf, which is near the Jordanian border. The United States and other anti-Islamic State coalition nations use the base to train Syrian rebels to fight the terrorist group. Thursday’s strike was the third time that the U.S. military attacked the group since May 18. Later Thursday, an American F-15E Strike Eagle shot down an armed drone apparently supporting the militia after it dropped a bomb near a patrol of U.S.-backed anti-ISIS fighters just outside the non-combat zone that surrounds Tanf.

The Pentagon has maintained all four of its attacks were conducted in self-defense to stop a direct threat. The United States does not want a fight with any group other than ISIS, Davis told reporters at the Pentagon.

“We are in Syria to defeat ISIS. Full stop,” he said. “Anything else we do is in self-defense only. We do no seek conflict with the Syrian regime or with these pro-regime or Iranian proxy forces.”

The United States maintains communications channels with Russia to ensure flight safety over Syria. American forces have repeatedly asked the Russian military, which supports Syrian President Bashar Assad, to relay the message to pro-Syrian government forces to stay outside a 35-mile perimeter established around the Tanf base. U.S.-led forces have dropped some 90,000 leaflets warning the group to move.

Davis said the Russians have relayed the American messages to the militia through the Assad government. He said tensions have eased, though the Iran-backed forces had not moved from the area near Tanf.

Davis declined to discuss the details of those communications with the Russians, which he said also included talks between top military officials.

“It literally is in our agreement with the Russians about this [flight safety] line that we don’t talk about what is discussed on it,” he said.

The Pentagon has been largely critical of Russia’s involvement in the Syrian civil war. Russia has deployed air and some ground forces to Syria under the auspices of fighting terrorism, including ISIS, but has mostly focused its military power on supporting Assad against anti-government forces. The United States has regularly blamed Russia for killing civilians and complicating battlespaces throughout the country.

Russia and Iran are among Assad’s key allies backing him in the civil war that has raged on since 2011.

The drone used by the militia was similar to an American MQ-1 Predator and was armed when it was shot down. The bomb dropped was “a dud” and did not injure or kill any U.S.-backed fighters, Davis said.

He declined to reveal the drone’s origin. But there are few groups operating in Syria with such “high-end unmanned fighting systems,” Davis said.

“We know that Iran in its support of the regime, provides them equipment. They provide them with assistance and support and funding,” he said. “I don’t think we’re ready to call it that. But certainly, at the very least, it’s evidence of Iran’s influence there.”

Davis said the coalition was conducting an assessment of the drone, but he was not able to share any observations.