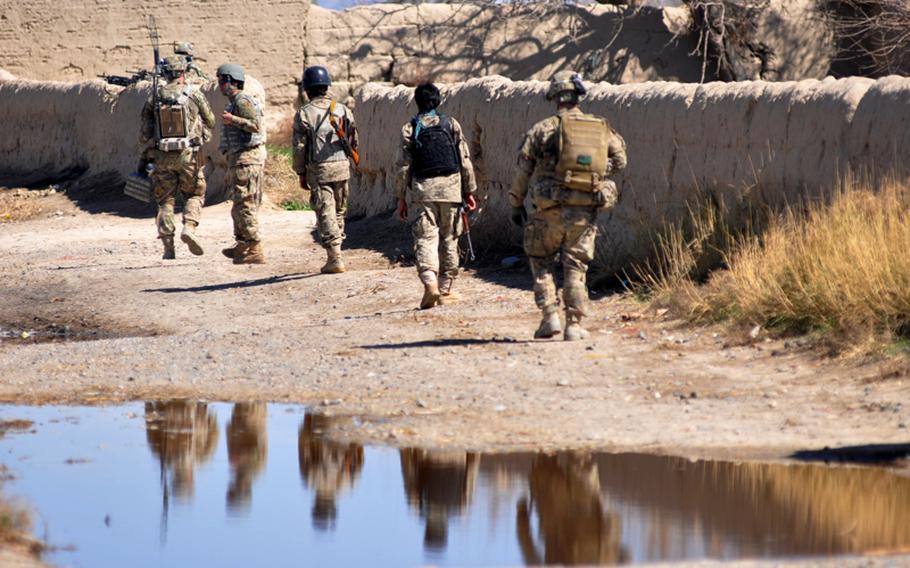 WASHINGTON — Pentagon planners are discussing an option that would temporarily leave a higher number of U.S. troops in Afghanistan after 2014 to help the Afghan military gain its footing, a defense official said Monday.

The idea of leaving a short-term “bridging force” in addition to the longer-term force the United States hopes to keep in Afghanistan was first aired last week in a report whose authors include retired Gen. John Allen, recently the top U.S. commander in Afghanistan, and Michèle Flournoy, former Undersecretary of Defense for Policy.

“(F)or two to three years after 2014, the United States may need an additional force package of several thousand personnel to help the Afghans finish building their air force, their special operations forces and certain other enablers in medical realms, in counter-IED capability and in intelligence collection,” said the report released by the Center for a New American Security. “This might be viewed as an additional bridging force, above and beyond the Enduring Force.”

A number of post-2014 options are now being considered, including the bridging force, said Pentagon spokesman Col. Steve Warren.

“It’s certainly an idea that’s being discussed in many different setting and forums, including the Pentagon,” he said.

President Barack Obama hasn’t settled on a final number of troops the United States would keep in Afghanistan for a long-term training, advisory and counterterrorism mission, but defense leaders have endorsed a force 8,000 to 12,000 NATO troops.

While the future of Afghanistan will be high on the agenda of NATO defense ministerial meetings that Defense Secretary Chuck Hagel will attend this week in Brussels, Warren said discussion is likely to focus on the “larger game plan” rather than specific numbers.

The report by Allen, Flournoy and Brooking Institution senior fellow Michael O’Hanlon also did not recommend a specific number for the bridging force, but it urged the Obama administration to announce its post-2014 plans soon.

It also warned that a too-quick drawdown between now and December 2014, or insufficient support after 2014 “would risk snatching defeat from the jaws of something that could still resemble victory.”