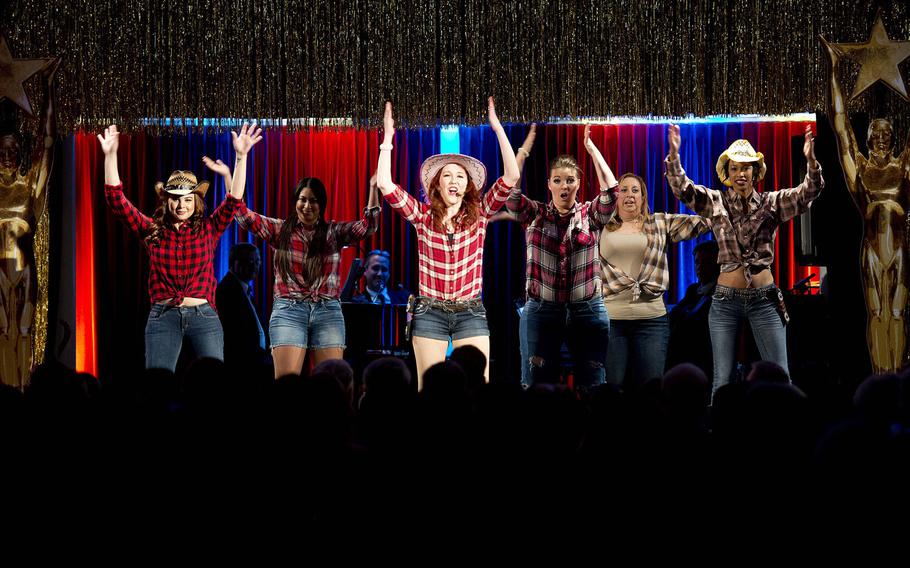 The Grafenwoehr Performing Arts Center cast of ''Dirty Rotten Scoundrels'' performs the song ''Oklahoma!'' during the Installation Management Command Europe Tournament of Plays Toppers awards ceremony in Kaiserslautern, Germany, on Saturday, April 23, 2016. Some Army community theaters across Europe were facing imminent closure due to proposed Army MWR cuts, but some of their futures still hang in the balance, while the Army reviews its planned cuts following concerns raised by the Pentagon. The theater at Grafenwoehr has been authorized to continue its program for the time being, according to a post this week on the theater’s Facebook page. (Michael B. Keller/Stars and Stripes)

KAISERSLAUTERN, Germany — Steep reductions to Army Morale, Welfare and Recreation programs that were to begin next week are on hold, pending a top-level review prompted by a Pentagon official’s concern that the funding cuts may be too deep.

“The Army has decided not to reduce appropriated fund support to Morale, Welfare and Recreation activities until it has completed a thorough and comprehensive analysis,” Defense Department spokesman Eric Pahon said in a statement this week to Stars and Stripes.

The Army announced in late August that military personnel and families would see changes in services provided by MWR programs starting in October because of budget cuts. Those cuts were a result of an Army decision to reduce appropriated funding — taxpayer dollars earmarked by Congress — to MWR activities by $105 million, or about 23 percent.

But those plans were abruptly, and quietly, put on hold after Todd A. Weiler, the assistant secretary of defense for manpower and reserve affairs, questioned the extent of the MWR cutbacks in a memorandum that Stars and Stripes has obtained.

“Given the level of Administration interest in programs impacting military family quality of life, I strongly suggest that the Army delay any reductions until you brief me on their necessity and on your actions to mitigate the adverse impact on the military community,” Weiler wrote on Sept. 9 to the assistant secretary of the Army for manpower and reserve affairs.

An MWR employee in Europe concerned about the pending cuts forwarded the memorandum to Stars and Stripes this week, after receiving it from a supervisor. Defense Department officials confirmed the memorandum came from Weiler’s office.

Pahon, the DOD spokesman, said that since Weiler issued his memo to the Army, Weiler and Secretary of the Army Eric Fanning “have worked in lockstep to ensure any impact to military families is mitigated.”

The department “is pleased with the fast and thorough review Secretary Fanning has initiated and intends to support the Army however possible to bring this situation to a fast resolution,” Pahon said.

Weiler said in his memo he was “deeply concerned” about the Army’s public announcements to reduce appropriated-fund support for MWR programs by about $105 million in fiscal 2018, with immediate reductions starting in fiscal 2017.

The public way in which the Army made the announcements was also troubling, Weiler said, since they were made “all prior to final Department and Congressional decisions on funding for these years.”

Lt. Gen. Kenneth Dahl, the commander of U.S. Army Installation Management Command, announced the cuts in a YouTube video posted to social media in late August. Dahl said he wanted to let patrons know that they would start noticing changes in the level of MWR services by the end of the calendar year, and he wanted them to know why. The reductions were necessary, he said, so the service can “remain combat ready.”

The video has since been taken down, an IMCOM spokesman confirmed.

Weiler said in his memo that the Army neglected to address previous concerns he raised that it had failed to meet the Defense Department’s minimum appropriated-funding standard of 65 percent for “Category B” MWR programs in fiscal 2015. Category B programs, including arts and crafts, bowling centers (with fewer than 12 lanes), automotive skill development, outdoor recreation, child development services, youth activities, theater and swimming pools, are intended to help make military installations feel like temporary hometowns, according to DOD. They can generate limited revenue, but “in no case could they be sustained without substantial” appropriated fund support, DOD says.

In June, Weiler “requested the Army’s plan to come into compliance with this required standard,” he wrote. “We extended the original deadline until August 31, but I have not yet received the Army’s plan. Instead, I learned the Army is planning to cut APF support for MWR even further.”

Those standards were established in close coordination with Congress to ensure that the military services provide at least a minimum level of MWR programs and to prevent servicemembers and their families “from bearing costs that should be borne with” appropriated funds, Weiler said.

“These standards are not optional and are not subject to Military Department waiver,” Weiler wrote in his memo.

Several Army posts in the States had already announced their MWR cutbacks, including reduced library hours, fewer recreational trips, the elimination of full-service car repairs and the shuttering of a base pool and frame shop.

In Europe, garrisons were in the midst of announcing to their base populations MWR reductions when the process was put on hold.

Dahl had said that the Army had directed garrison and senior commanders to review which programs were affordable and popular on their installations and make recommendations on where to cut.

Some programs, such as child development centers, were to remain fully funded.

Officials did not give a timeline on when any new decisions might be announced.

“The realities of a changing force and a budget designed to support a smaller Army require cooperation to find innovative, cost-effective solutions that effectively deliver the services needed on installations, which include partnerships with industry, local and state governments and other federal agencies,” DOD spokesman Pahon said. “The goal is to provide programs and services that meet the needs of Army life, foster life skills and strengthen resilience.”

Weiler, an Army veteran and former attack helicopter pilot, was confirmed by the Senate earlier this year as the first assistant secretary of defense for manpower and reserve affairs. At his confirmation hearing in February, he said he would make as one of his priorities quality-of-life programs “that promote the well-being and resilience” of servicemembers and their families, according to written remarks posted online by the Senate’s Armed Services Committee.