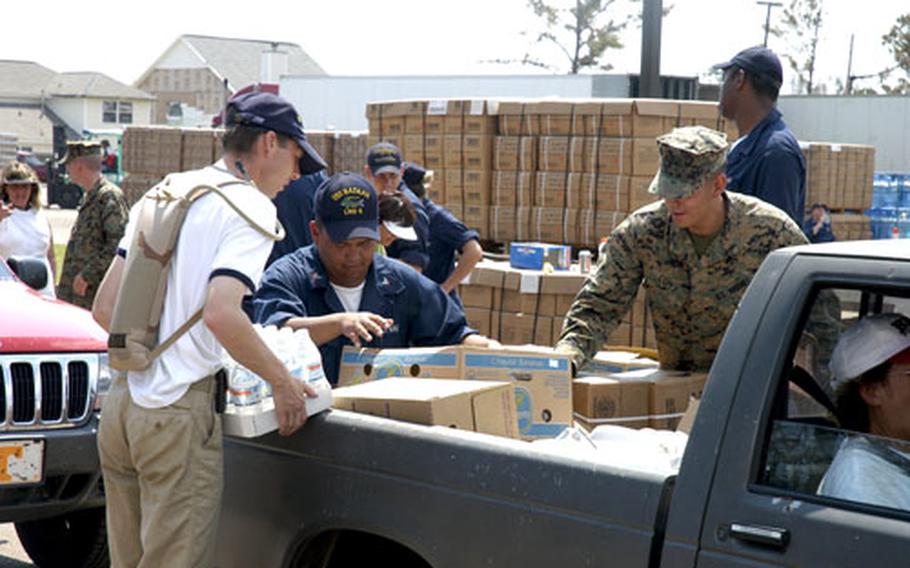 U.S. sailors assigned to the amphibious assault ship USS Bataan, Dutch sailors from the frigate Van Amstel and U.S. Marines load cases of bottled water and Meals, Ready to Eat (MREs) into the bed of a pickup truck at the First Baptist Church near D’Iberville, Miss. (U.S. Navy / KRT)

U.S. sailors assigned to the amphibious assault ship USS Bataan, Dutch sailors from the frigate Van Amstel and U.S. Marines load cases of bottled water and Meals, Ready to Eat (MREs) into the bed of a pickup truck at the First Baptist Church near D’Iberville, Miss. (U.S. Navy / KRT) 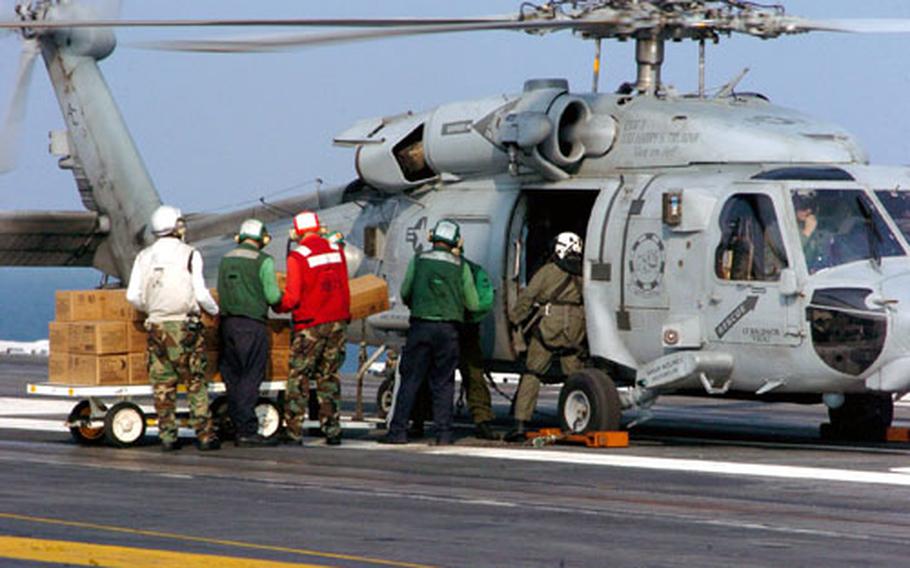 Air Department personnel load MREs onto an HH-60H Seahawk helicopter on the flight deck aboard the USS Harry S. Truman in the Gulf of Mexico on Sept. 5. (U.S. Navy News/ KRT)

ARLINGTON, Va. &#8212; The Defense Department has committed about 58 percent of its stockpiles of 36 million Meals, Ready to Eat to Hurricane Katrina relief efforts, a Defense Department spokesman said, but has no concerns about running out.

Swiergosz also said Hurricane Katrina relief efforts will not affect stockpiles of MREs for U.S. troops overseas. &#8220;That is factored in to how we manage civil support aspect,&#8221; he said Tuesday.

Federal officials have ordered 21 million MREs and about 17 million have already been delivered, Swiergosz said.

The Defense Department has also pre-positioned 1 million MREs in Virginia and Georgia in anticipation of Hurricane Ophelia, he said.

Swiergosz said replenishing MREs is a simple matter. &#8220;It is not like something that is not produced en masse anyway,&#8221; he said.

Including the Defense Department&#8217;s contribution of rations, a total of 32 million MREs have been committed to Hurricane Katrina relief efforts, said a spokeswoman for the General Service Administration.

Mary Alice Johnson said other sources have contributed MREs but did not know offhand who those sources are.

A spokesman for the Defense Logistics Agency said MRE manufacturers have &#8220;ramped up&#8221; the production of MREs to replenish rations used for hurricane relief efforts.

Bill Ernst, of the DLA&#8217;s Philadelphia office, said increased MRE production and pre-positioned stockpiles of rations should mean U.S. troops will not face a reduction in MREs.

Swiergosz said good planning and the Defense Department&#8217;s &#8220;fantastic&#8221; ability to quickly airlift supplies anywhere within the United States have allowed supplies to flow to the Gulf Coast quickly.

The MREs going to the Gulf Coast are being sent to centers where they are distributed to Hurricane Katrina victims, said Pentagon spokesman Bryan Whitman.

In Louisiana, 804,000 MREs have been distributed since Katrina hit, a state official said.

Officials in Louisiana are confident they will continue to get MREs as long as they need them, said Mark Smith, a spokesman for the state Office of Homeland Security and Emergency Preparedness.