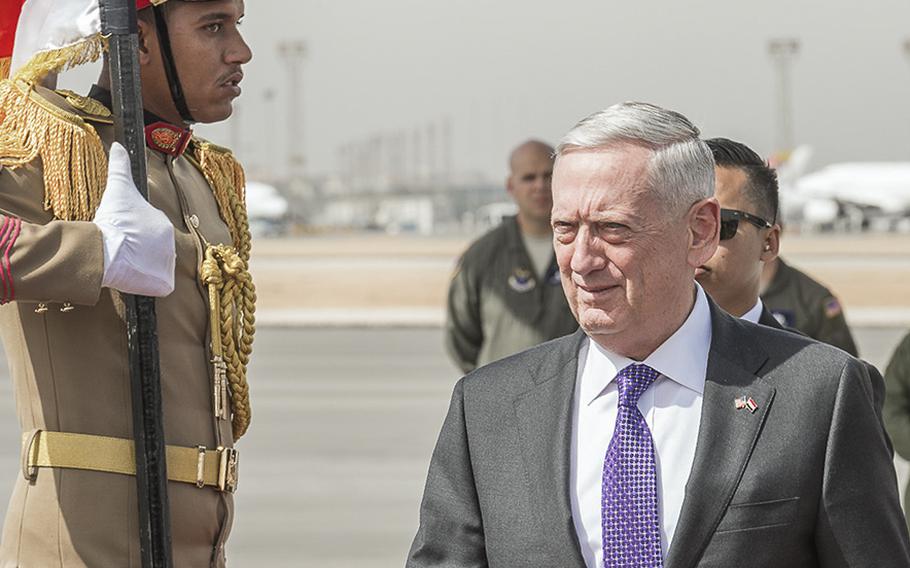 Buy Photo
U.S. Defense Secretary Jim Matt is greeted by an honor cordon as he arrives in Cairo on Thursday, April 20, 2017. (Corey Dickstein/Stars and Stripes)

Buy Photo
U.S. Defense Secretary Jim Matt is greeted by an honor cordon as he arrives in Cairo on Thursday, April 20, 2017. (Corey Dickstein/Stars and Stripes) 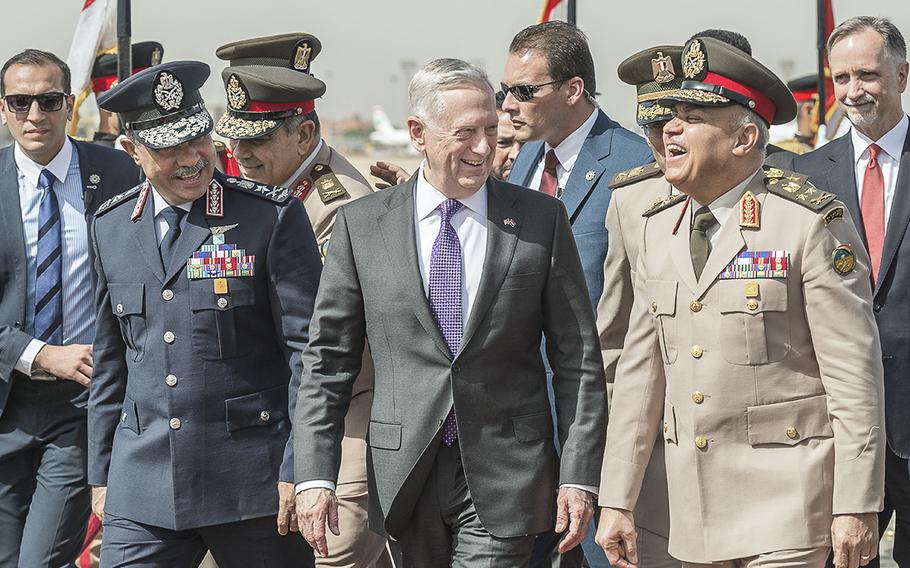 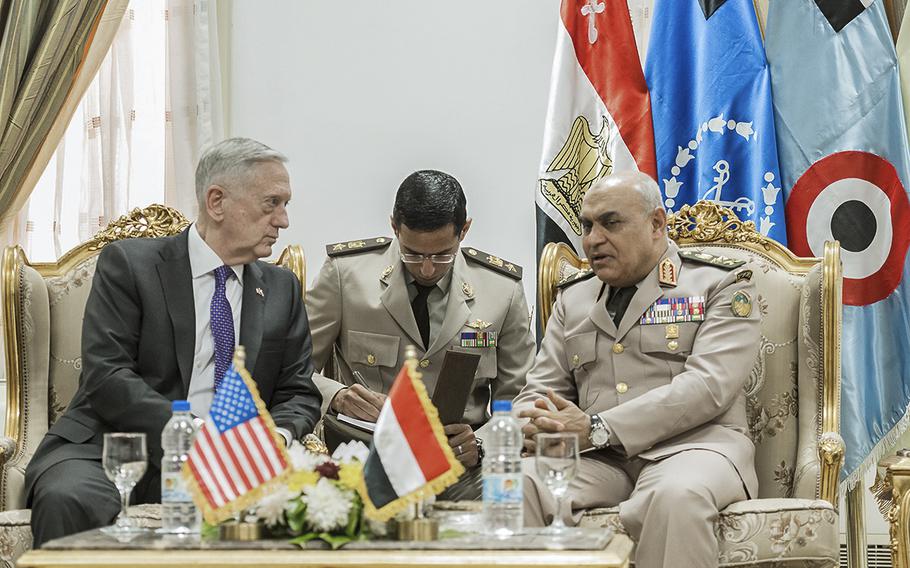 CAIRO — Defense Secretary Jim Mattis vowed Thursday that the United States will aid Egypt in its battle against terrorism, pledging to strengthen the military bond between the two countries strained during Barack Obama’s administration.

“We agreed on the need for a renewed and strong security partnership, as the new administration comes in,” Mattis said of his discussions Thursday in the Egyptian capital with President Abdel-Fattah el-Sissi and Defense Minister Gen. Sedki Sobhy. “… I left Cairo very confident, very confident in the avenues we have to advance our military-to-military relationship, which has been a bedrock and has stood solid all these years.”

Thursday’s meetings focused primarily on Egypt’s efforts to counter terrorism, primarily the Islamic State, which has infiltrated the country through its porous western border with Libya and has maintained a long-term insurgency in the Sinai Peninsula, said U.S. officials who spoke on the condition of anonymity.

Mattis did not provide specifics on the kind of assistance the United States could provide Egypt to bolster its terrorism fight. U.S. officials said no specific commitments were made Thursday.

The talks built off discussions that Mattis and el-Sissi held April 5 at the Pentagon, during the Egyptian president’s visit to Washington earlier this month when he also met with President Donald Trump.

Trump, like Mattis, called for the two nations to rebuild its relationship, adding el-Sissi had “done a fantastic job in a very difficult situation” in its terrorism fight.

El-Sissi’s visit to the White House was the first by an Egyptian president in eight years, following tensions between the two nations over human rights issues.

President Obama froze some of the roughly $1.5 million in aid that the United States provides Egypt annually after the 2013 military coup that overthrew democratically elected President Mohammed Morsi.

Egypt is one of the 60-plus nations that belong to the anti-ISIS coalition. It primarily provides counter-propaganda support for the mission, but does not provide troops or any military role to the fight.

The Trump administration could potentially ask Egypt, which has among the largest armed forces in the Middle East, to do more for the coalition fighting ISIS in Iraq and Syria, Gold said. But Egypt is more focused on its own terrorism issues.

The Egyptians have struggled to secure their border with Libya, allowing that country’s ongoing civil war — and ISIS fighters — to occasionally spill across the border. In the Sinai, a yearslong anti-government guerrilla fight by an ISIS-affiliated Islamist group has continued, killing some 2,000 Egyptian troops since 2013.

ISIS fighters more recently have begun waging a more traditional terrorist campaign in Egypt, including twin bombings this month that killed more than 40 people and wounded at least 100 more. The Palm Sunday bombings targeted Coptic Christian churches in the northern Egyptian cities of Alexandria and Tanta.

Egypt and Israel’s relationship is at an all-time high, a U.S. official said.