Pentagon budget calls for $143 million buildup at Jordan air base 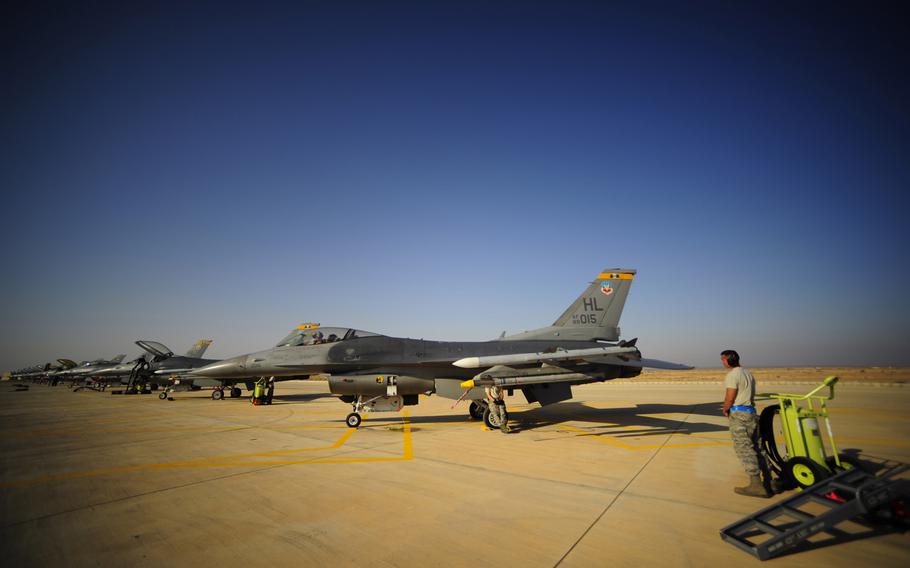 Air Force Staff Sgt. Nicholas Anderson from the 388th Aircraft Maintenance Squadron at Hill Air Force Base, Utah, awaits the start of an exercise at Muwaffaq Salti Air Base, Jordan, in 2011. The Pentagon wants to pump $143 million into upgrades at the base, more than at any other overseas Air Force operational site. (Asha Kin/U.S. Air Force)

The Pentagon wants to pump $143 million into upgrades at a strategic air base in Jordan, more than any other overseas Air Force operational site, as the military moves to expand drone and fighter flights in the region.

The funding, included in the Pentagon budget passed by Congress last week, highlights the growing importance of Jordan as the U.S. military makes plans in a neighborhood of unpredictable partners.

Muwaffaq Salti Air Base, positioned near Jordan’s border with Syria and Iraq, has played a key role for the U.S. in its battle against the Islamic State group. But the base, according to the Air Force, has been overwhelmed by the pace of operations. Fighter-bombers from other nations involved in the conflict, such as Belgium and the Netherlands, also have operated from its twin runways.

Air Force budget documents say the facility has limited ramp space to launch combat sorties, has “zero dedicated space to support cargo and personnel recovery operations” and is operating at “four to five times what the space was originally intended to support.”

Troops operating at the Azraq base now face “extreme life, health, and safety risk” because living areas are within range of explosives from operational areas.

“To alleviate these risks, to support the influx of personnel, and to provide adequate facilities for a contingency operations population, a new LSA (Life Support Area) to include supporting facilities and infrastructure are required,” Air Force documents said.

However, Congress’ inclusion of the Jordan project in the $700 billion National Defense Authorization Act highlights the Pentagon’s long-term needs in the region. The $700 billion defense act is expected to be signed into law by President Donald Trump.

During the past year, tensions among Gulf states have flared and longtime U.S. bases have been caught in the middle.

In June, Saudi Arabia and other Arab states cut ties with Qatar, home to the Al Udeid Air Base, out of which the U.S. has run much of its war against ISIS.

Trump, who at the time backed the Saudi campaign to pressure Qatar over accusations of ties to terrorist groups, said the U.S. would find alternatives to Al Udeid if necessary.

“If we ever have to leave (Al Udeid) we would have 10 countries willing to build us another one, believe me, and they will pay for it,” Trump said in a radio interview at the time.

Defense Secretary Jim Mattis later clarified that the U.S. has no intention to replace Al Udeid.

Of the roughly $500 million Congress has approved for overseas Air Force operational sites, $143 million is slated for the Jordan base, compared to $15 million for a consolidated squadron facility at Al Udeid.

Muwaffaq Salti Air Base is 80 kilometers east of Amman, where Lawrence of Arabia had his headquarters during World War I. The base, in the desert oasis of Azraq, opened in 1981 and was named after Lt. Muwaffaq Salti, a fighter pilot killed in a dogfight with the Israelis in 1966.

Several European sites also will get funds if the NDAA is signed into law. A base in Luxembourg would get the second largest chunk, with $67.4 million planned for prepositioned Air Force equipment.

Incirlik Air Base in Turkey is slated to receive $48.6 million, which will fund a new dormitory and various security measures on base. The U.S. also has been increasingly at odds with NATO ally Turkey, which has sought out closer ties with Russia.

Former top U.S. commanders in Europe, including retired Adm. James Stavridis and Charles Wald, the former four-star deputy at European Command, have said the U.S. should start to consider alternatives to Incirlik.

“I think we can go to other places,” Wald said in a July interview with Stars and Stripes. “I think Jordan is a fantastic ally and partner. I think it is time for the United States to start thinking in those terms.”