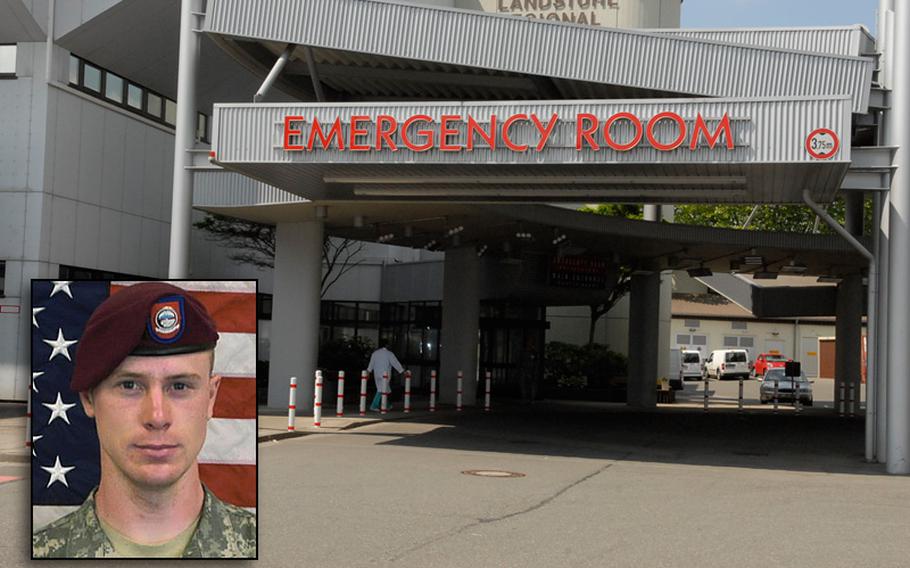 The entrance to the emergency department at Landstuhl Regional Medical Center, where Army Sgt. Bowe Bergdahl, 28, a prisoner of war released Saturday after five years in captivity, is recovering and beginning what's expected to be a long reintegration process. (Stars and Stripes)

“His health continues to improve daily. He is conversing with medical staff [in English] and becoming more engaged in his treatment plan. He is resting better and showing signs of improvement,” Pentagon spokesman Col. Steve Warren told reporters.

Warren would not provide additional details about his health because of privacy concerns.

Bergdahl is only in contact with his reintegration and recovery team, and he has not yet spoken with his parents, according to Warren.

“We don’t have a time or date for his departure,” said Marie Shaw, a hospital spokeswoman. Bergdahl, who remains in stable condition, still requires medical care, she said.

“All three of these phases progress according to the individual and according to the assessment of the [medical] team … All other aspects of his reintegration will progress in accordance with his healing,” Warren said.

Bergdahl arrived at the hospital Sunday morning, a day after the Taliban released him from captivity in a controversial prisoner swap for five senior Taliban detainees at Guantánamo Bay. He hasn’t been seen by the public, despite a steady presence of media set up outside the hospital’s emergency room entrance.

President Barack Obama said Thursday he “absolutely makes no apologies” for seeking the release of Bergdahl in a prisoner swap with the Taliban, vigorously defending an exchange that has caused a furor in the United States and has dogged the president on his European trip this week.

When it comes to getting soldiers back from war, Obama said, “We don’t condition whether or not we make the effort to try to get them back.”

He also said Bergdahl’s health had been deteriorating and “We were deeply concerned about it.

“We saw an opportunity and we seized it. And I make no apologies for that,” Obama said during a joint news conference with British Prime Minister David Cameron.

Once he’s deemed well enough, Bergdahl will be moved to a military medical treatment center in San Antonio, where he’ll continue reintegration and be reunited with his family.

DOD’s reintegration of former prisoners of war or captives is geared toward gathering critical information while protecting the individual’s health and welfare, according to DOD.

While the Pentagon has said Bergdahl’s health is of top priority, officials say they also intend to thoroughly investigate the circumstances leading to his disappearance and subsequent capture by the Taliban in 2009 and have not ruled out punishment.

Warren said he did not know if Bergdahl had been debriefed by DOD officials regarding his capture and captivity, but noted that debriefings are an “integral part”of all three phases of the reintegration process.

Warren said that Secretary of Defense Chuck Hagel will heed calls by lawmakers to discuss the Bergdahl case and the circumstances surrounding his release.

“Secretary Hagel looks forward to speaking with Congress next week. He understand that there are questions and concerns and he is looking forward to addressing them,” Warren said, without providing a specific date or time for when that will happen.

“The assessment was that his health and safety were at such a level of risk that we needed to act swiftly,” Warren said when asked about Bergdahl’s health status at the time that the prisoner swap was made.

Regarding Bergdahl’s potential promotion to staff sergeant, which was expected to happen soon, Warren said Bergdahl’s duty status has changed since he was released. While he was being held captive, he was classified as “Missing/Captured,” but now he is considered an active duty soldier.

“He now will be consider for promotion per normal Army procedures,” according to Warren.