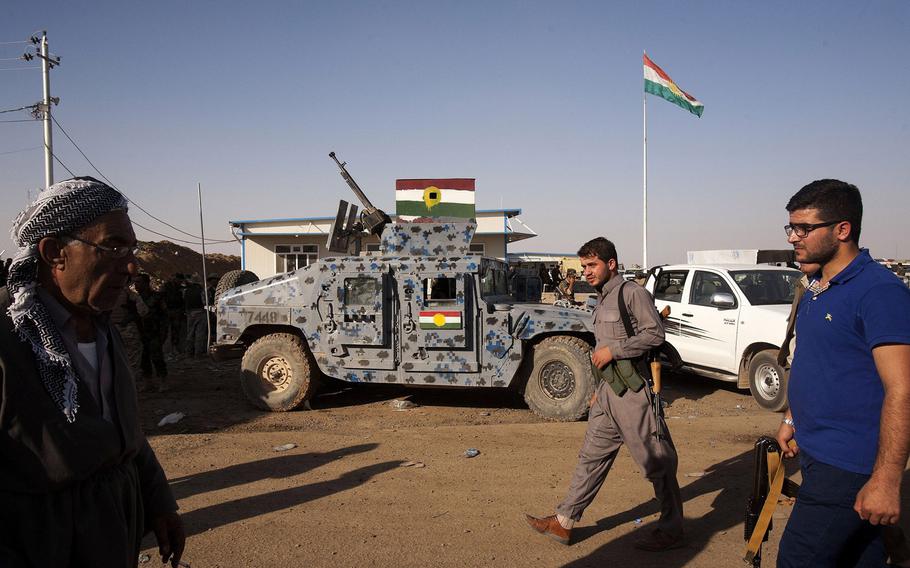 Kurdish peshmerga gather at the front lines in Kalak, west of the Iraqi capital Irbil, facing militants from the Islamic State just a little over a mile away on Aug. 7, 2014. (Mitchell Prothero, McClatchy Washington Bureau/MCT)

WASHINGTON — The international effort to help Iraqis fight Islamic militants is heating up, with seven additional countries agreeing to provide arms to the Kurdish peshmerga forces.

Albania, Canada, Croatia, Denmark, France, Italy and the U.K. have committed to giving weapons and equipment to the embattled Kurds, the Pentagon announced Tuesday.

The announcement comes about two weeks after Hagel set up a working group to find ways to accelerate arms deliveries to the Kurds.

The Defense Department said the materiel is “urgently needed” as the Kurds take on the militant group known as the Islamic State, which has taken over much of Iraq and Syria.

The supply efforts “have already begun and will accelerate in the coming days with more nations also expected to contribute,” Secretary of Defense Chuck Hagel said in a statement.

He did not indicate which additional countries he anticipates will join the coalition.

“This multinational effort, which is being coordinated with the Government of Iraq in Baghdad, will greatly assist Kurdish forces in repelling the brutal terrorist threat they face from [the Islamic State],” Hagel said.

“The determination of the Iraqi people and the international community to counter the threat posed by [the Islamic State] is only growing, and the United States looks forward to working with our friends from around the world to assist this effort,” he said.

The U.S. and the Iraqi central government in Baghdad have already been rearming the Kurds, but officials said other countries can provide things that the Pentagon can’t.

“What’s great about this effort is so many of these partner nations have in their stocks more than we do the kinds of equipment that the Kurdish forces use, which isn’t necessarily just American-made materiel,” Kirby told reporters.

Kirby said the additional gear that has already begun to flow to the Kurds covers a “full range” of small arms ammunition and “other personnel-served weaponry.”

In addition to helping the Kurds get weapons, the U.S. military has been bombing Islamic State targets inside Iraq to protect American personnel and Iraqi civilians, as well as to assist Kurdish and Iraqi military ground force operations against the militants.

The latest strikes, carried out Tuesday, destroyed two Islamic State armed vehicles and damaged another near the city of Irbil, the capital of Iraq’s Kurdistan region where 90 U.S. troops are also manning a joint operations center, according to U.S. Central Command.

The U.S. has conducted 98 airstrikes in Iraq since the air campaign against the Islamic State was launched at President Barack Obama’s direction on Aug. 8, according to CENTCOM.

Last week, Hagel raised the possibility of launching airstrikes against militants in neighboring Syria, where the Islamic State has a support base that helps them conduct operations in Iraq. At a press conference Tuesday, Kirby would not confirm news reports that the U.S. military had begun conducting intelligence, surveillance and reconnaissance flights over Syria to prepare for a potential expanded bombing campaign.

When asked if the White House had ordered ISR flights over Syria, Kirby said he wouldn’t discuss intelligence matters, but added: “We’re a planning organization here. We have to be prepared for all kinds of options. And with respect to providing military options, we’re going to be ready to do that.”