Pentagon: Airstrike hit mosque complex that should have been on 'no strike list' 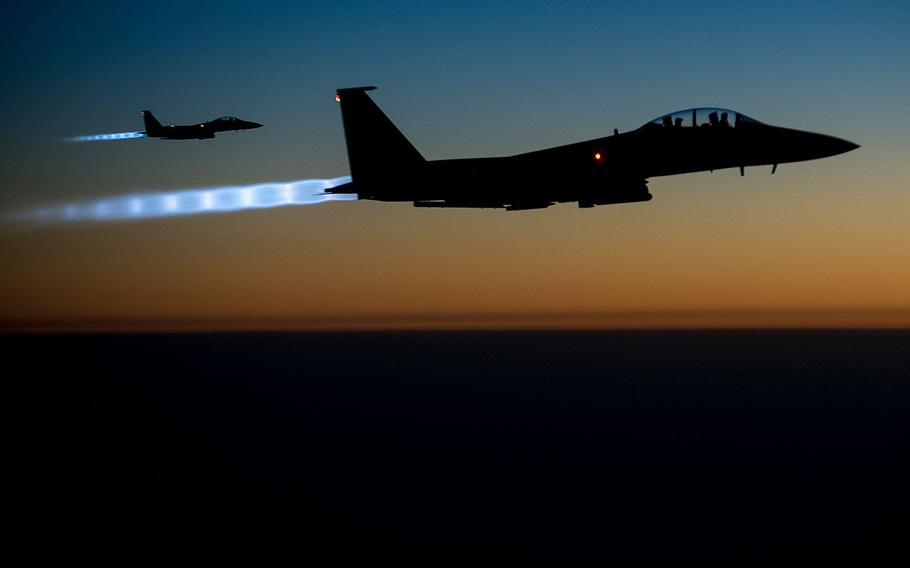 WASHINGTON — The Pentagon acknowledged Wednesday that a string of missteps led to a March 16 airstrike in Aleppo, Syria that targeted al-Qaida members in a mosque complex that should have been on the military’s “no strike list.”

The strike, which was called in by U.S. special forces, killed dozens of al-Qaida members and potentially one civilian in the building.

On Wednesday, the Pentagon released the findings of the U.S. Central Command investigation into the airstrike and acknowledged that the building had not been properly vetted as a target before F-15 fighter jets and an MQ-9 drone attacked it. Ten bombs from the F-15s and two missiles from the drone struck the compound.

The target was selected based on information received in the days before the attack that a meeting of al-Qaida leaders was about to take place there.

However, the complex had not been appropriately identified as a mosque on the military’s “no strike list,” said Army Brig. Gen. Paul Bontrager, deputy director for operations for Central Command.

Being on the list might not have prevented the strike. But it would have required additional inquiry and a higher level of approval to authorize the attack, Bontrager said.

“Most frustrating was that some of the intelligence team did know this was a religious complex but the analysis did not get to the no-strike list nor to the [final targeting officer who called in the airstrike,]” he said.

Bontrager also said the strike cell underwent a shift change before the time of the attack and the needed information was not provided to the team taking over.

More so, the strike cell at the time of the attack “did not have the best mix of people,” he said. “We could have had people who were more experienced” calling in the strike.

Bontrager would not say where the strike cell was located.

However, he said the strike was still legal because it was targeting al-Qaida members. Some human rights groups on the ground in Syria have said no al-Qaida members were at the mosque at the time of the attack.

Bontrager admitted the Central Command investigation looked primarily at the electronic records, emails and other data to review the decision-making process and did not talk to anyone on the ground or investigate the airstrike site in person.

“We simply did not have access,” he said, noting the location was largely under al-Qaida control.

The Pentagon initially announced the strike in March, when it said the building was a meeting hall and did not believe it was part of the mosque. The Pentagon said Wednesday that the building, which was under construction, was a schoolhouse associated with the mosque, which was across the road and not targeted, but sustained minor damage from the strike.

The investigating team has recommended strike cells should ensure there is more of an “argumentative” climate, with members challenging the validity of targets prior to an attack. No one has been found at fault in the strike, Bontrager said.

“This is not a place where we found any negligence on any individual,” he said.