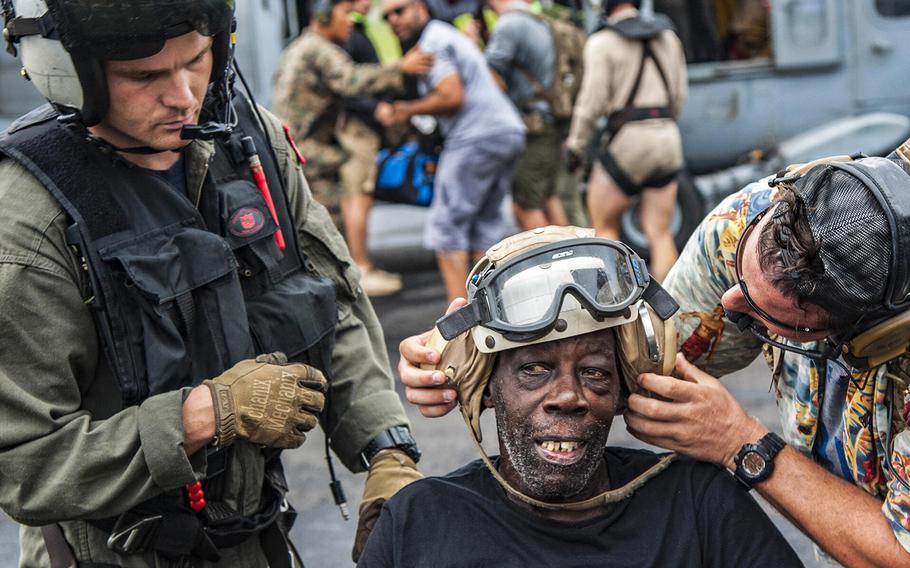 Navy Petty Officer 2nd Class Nicholas Glass helps a resident prepare for evacuation from the island of Dominica on Thursday, Sept. 28, 2017, in Hurricane Maria’s aftermath. The Pentagon on Friday announced that it was redirecting the USS Wasp to help out in hurricane relief on Puerto Rico. (Taylor King/U.S. Navy)

The Defense Department on Friday tasked the USS Wasp, an amphibious assault ship carrying two helicopters, to move from its location near the eastern Caribbean island of Dominica toward Puerto Rico to expand rescue and relief operations there in the wake of the Category 4 storm that struck Sept. 20, defense officials said. Meanwhile, the USNS Comfort, a 1,000-bed hospital ship, left port from Norfolk, Virginia, on Friday and was expected to reach Puerto Rico by the middle of next week, according to the Navy.

Army Lt. Gen. Jeffrey S. Buchanan, who deployed Thursday to take command of military efforts on the island, said the movements were part of the Defense Department’s commitment to supply as much support as possible at the Federal Emergency Management Agency’s request. He expected the military force that was nearing 5,000 troops Friday to continue to increase in the coming days.

“Capability is building every single day,” Buchanan told reporters from San Juan on Friday afternoon “We’re going to keep building until we have met the needs for all the people in Puerto Rico.”

The Wasp initially left Norfolk on Aug. 30 en route to its new duty station at the Sasebo Naval Base in Japan, but it was halted in the Caribbean as Hurricane Irma churned through the region as a Category 5 storm and was followed days later by Maria. This week, the Wasp has leading military aid efforts in Dominica, a tiny island nation that was ravaged by Maria, which struck as a Category 5 hurricane.

With the addition of the Wasp’s MH-60S Sea Hawk helicopters, the U.S. military will have 52 choppers responding to the disaster in Puerto Rico, according to U.S. Northern Command. The helicopters are conducting a variety of missions, including search and rescue, supply delivery and medical evacuation.

The Wasp will join the USS Kearsarge, another amphibious assault ship, and the USS Oak Hill, an amphibious dock landing ship, off Puerto Rico’s coast. The Comfort will also bring medical evacuation helicopters to Puerto Rico, according to the Navy.

On Friday, more than a week after Maria plowed through Puerto Rico, conditions on the island of 3.5 million people remained grim. Widespread debris limited emergency responders’ ability to reach remote sections of the island, power remained unavailable to the vast majority of the population and drinking water was scarce, according to Federal Emergency Management Agency officials.

John Rabin, the acting administrator for FEMA Region II, which includes Puerto Rico, said it was difficult to quantify how many hurricane victims remained without power or access to drinking water and food as the situation on the ground was rapidly changing. But supplies were reaching inhabitants in each of Puerto Rico’s 78 municipalities, he said.

The supplies, including bottled water, pre-packaged meals and fuel, were being disseminated from 11 distribution points set up across the island, officials said. Puerto Rico National Guard members were delivering the supplies by truck and helicopter across the island, in many cases going door-to-door to find victims in need, according to defense and FEMA officials.