Peninsula to get new computers 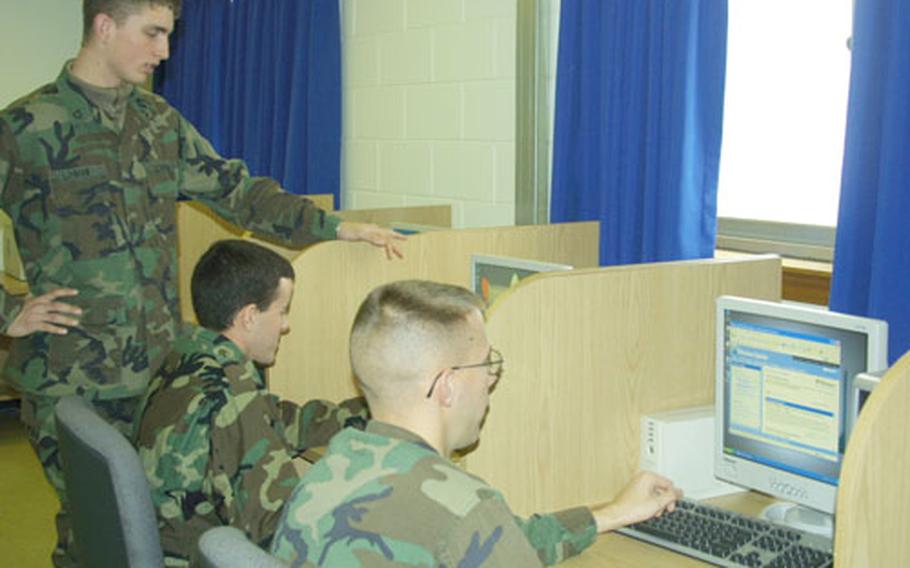 Soldiers of the 527th Military Intelligence Battalion at Zoeckler Station use one of the new Army Knowledge Online computer labs being established across the peninsula. Many of the labs will be open 24 hours a day, seven days a week to accommodate shift-workers, officials said. (Courtesy of 1st Signal Brigade)

The labs are designed to help soldiers with the Army Knowledge Online program, a system that allows access to military e-mail accounts, records and personnel information.

In all, officials said, $2.5 million is being poured into &#8220;automation and communications&#8221; equipment in the labs, being touted as a significant quality-of-life improvement for soldiers all over the peninsula.

An additional $600,000 from the Installation Management Agency, Korea Region Office is being used to furnish the labs and complete electrical upgrades to power the new equipment, officials said.

&#8220;We will install AKO labs on installations focusing on the remote areas first,&#8221; said Richard Husak, 1st Signal Brigade&#8217;s deputy regional chief information officer. He said the computer labs are to be in addition to the Telephony project, which is to &#8220;provide the availability of connectivity to the barracks room.&#8221;

The labs will be established in barracks day rooms and other areas, depending on where facility commanders want the computers. Many will stay open 24 hours a day, so they can be used by shift workers, officials said.

&#8220;We strive to prioritize our resources to achieve the right balance among training, infrastructure, and quality-of-life requirements across the brigade, as well as for our customers within 8th U.S. Army,&#8221; said Alex Harrington, 1st Signal Brigade public affairs officer.

AKO is the Department of the Army&#8217;s online tool to help soldiers with career management and professional development. The system also hosts military mail accounts and Army training courses and reference materials.