Buy Photo
Cpl. Jason Singleton hoists his son, Cameron, in the air as he prepares to leave Camp Pendleton, Calif., for a six-month deployment to Australia. Cameron was born just before Singleton returned from his last deployment and will turn one next weekend. (Jennifer Hlad/Stars and Stripes)

Buy Photo
Cpl. Jason Singleton hoists his son, Cameron, in the air as he prepares to leave Camp Pendleton, Calif., for a six-month deployment to Australia. Cameron was born just before Singleton returned from his last deployment and will turn one next weekend. (Jennifer Hlad/Stars and Stripes) 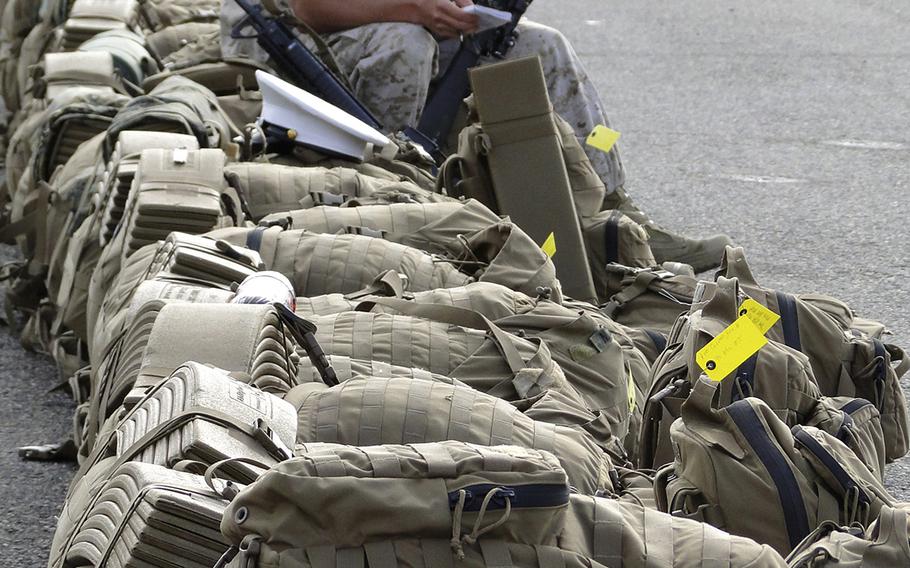 Buy Photo
Lance Cpl. Claudio Ibarra writes down the serial number on a rifle Tuesday morning as he prepares to leave Camp Pendleton, Calif. for a deployment to Australia as part of 1st Battalion, 5th Marine Regiment. (Jennifer Hlad/Stars and Stripes) 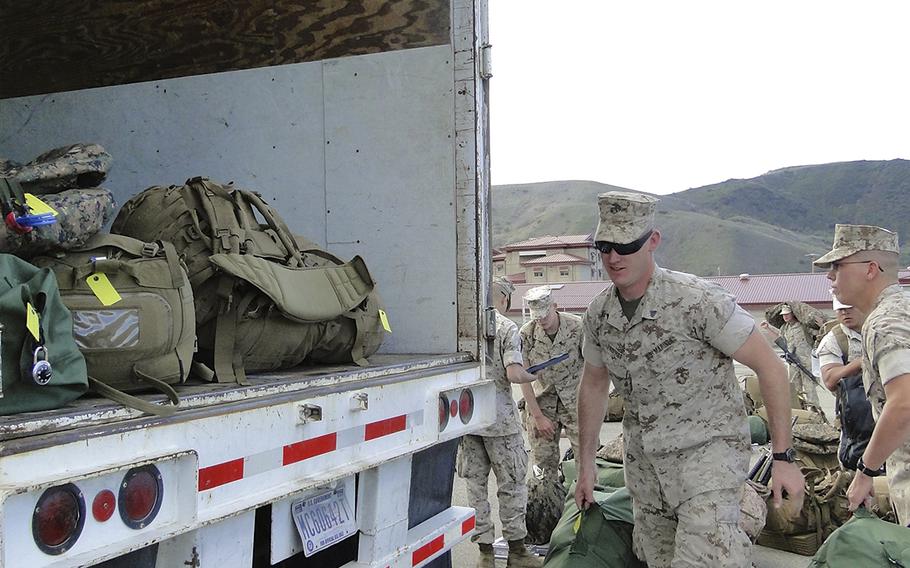 Buy Photo
Marines load their bags onto trucks Monday morning at Camp Pendleton, Calif., as they prepare to leave for a six-month deployment to Australia. First Battalion, 5th Marine Regiment is the first battalion-sized unit to deploy to Australia, and will be joined in the Northern Territory by a small Hawaii-based aviation element. (Jennifer Hlad/Stars and Stripes)

CAMP PENDLETON, Calif. — About 300 Marines gathered on the parade deck at Camp San Mateo on Tuesday, lining up their sea bags on the tarmac and holding loved ones close as a gray, rainy morning turned into a bright, blustery day.

The group was the first of three waves from 1st Battalion, 5th Marine Regiment — which uses the Camp San Mateo area of Pendleton — to leave for the unit’s six-month deployment to Australia’s Northern Territory. The 1,000-man battalion will be joined by about 100 Marines and four helicopters from a Hawaii-based unit to form the largest rotational deployment of Marines in Australia to date.

Mariah Singleton cuddled her baby boy, Cameron, as her husband went to the armory and finished last-minute tasks. This will be Cpl. Jason Singleton’s second deployment, and his wife said she thinks it will be harder than the first.

“I know how much I’m going to miss him,” she said.

Singleton had hoped her husband would be here for their son’s first birthday next weekend; he missed most of her pregnancy and Cameron’s birth. Still, she said, “I’m glad they’re going somewhere safe.”

Two groups of about 200 Marines each have deployed to Australia since President Barack Obama and then-Australian Prime Minister Julia Gillard announced the rotational deployment plan in November 2011; 1/5 is the first full Marine battalion to deploy Down Under.

During the six-month tour, the Marines will live and train with Australian soldiers and do community outreach in an effort to deepen defense ties and improve interoperability, Marines said. The unit also will do a training exercise with forces from New Zealand, and the Marines are ready to deploy elsewhere if necessary, said Lt. Col. Keven Matthews, commanding officer of 1/5.

Rotational deployments to Australia are part of the U.S.’s much-touted pivot to the Pacific. The Marines will build up to an air-ground task force of 2,500 deploying to Australia by 2015, Marines have said.

Cpl. Russadell Buzard said he was “really excited” to deploy to the Northern Territory and experience some of the Australian culture. Pfc. Nicholas Bower also said he was excited to go, though the deployment came a little sooner than he and his new bride, Kaylin Bower, expected.

The couple was married Feb. 15 and recently got a gray-eyed puppy, Flora, that Kaylin hopes will help keep her busy while her husband is gone.

“I think when your spouse deploys, it’s one of the hardest things you can go through,” she said. “Thank goodness it’s Australia.”

Lance Cpl. Julio Argueta, like the other Marines, said he was feeling pretty good about the deployment. Many of the members of the battalion — including Argueta, Singleton and Buzard — did a rotational deployment to Okinawa last year with the 31st Marine Expeditionary Unit. Australia will be “something new,” Argueta said.