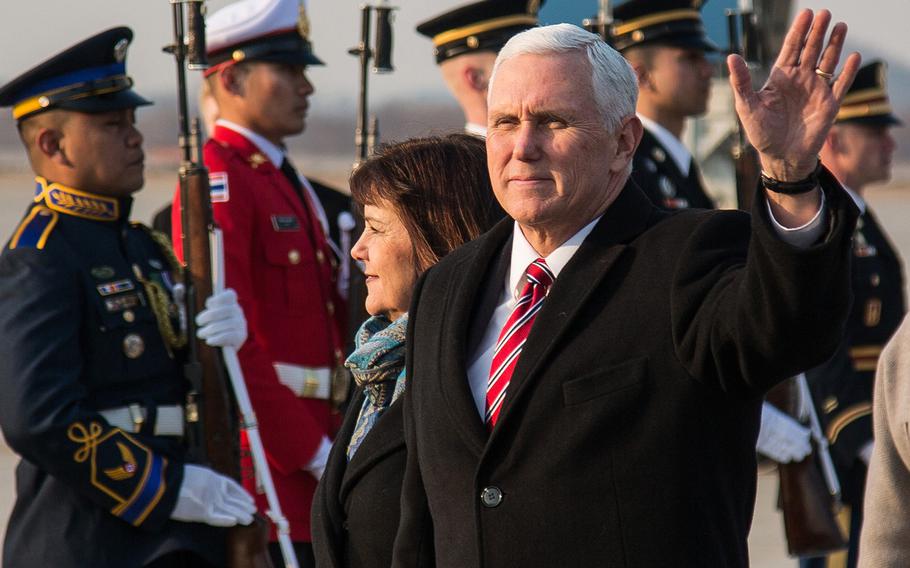 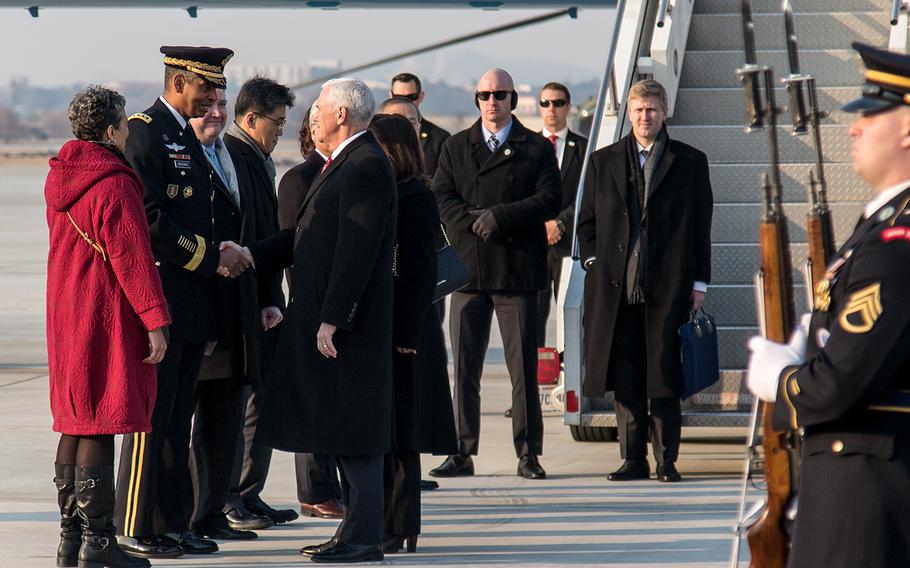 SEOUL, South Korea — On his way to the Olympics, Vice President Mike Pence struck the usual U.S. hard line against North Korea with vows to increase sanctions and warnings that “all options are on the table.”

But he added a human element to his talking points, in line with the U.S. administration’s recent focus on the North’s human-rights abuses to counter what critics have dubbed the nuclear-armed state’s “charm offensive” during the Winter Games.

That was highlighted with the iconic image of a North Korean defector hoisting his wooden crutches during President Donald Trump’s State of the Union speech.

“Together with our allies and partners, we will continue to strive to peacefully dismantle North Korea’s nuclear program and alleviate the suffering of its people,” Pence told U.S. troops in Japan before traveling to South Korea on Thursday.

The vice president also was bringing as his special guest to the Olympics Frank Warmbier, the father of a University of Virginia student who died after being released from North Korean captivity last year.

And he was expected to meet with North Korean defectors and visit a South Korean naval vessel that was widely believed to have been sunk by a North Korean torpedo in 2010, killing nearly 50 sailors.

Experts say the effort to cast a spotlight on the North’s brutal treatment of many of its people is a powerful tool because the leadership is extremely sensitive on the subject, but it’s unclear if the administration is trying to set the stage for military action or simply increase the pressure on the regime over its nuclear weapons program.

Pence’s harsh rhetoric was in stark contrast to the images coming from Olympic venues in Pyeongchang where North Korean athletes received applause during practices and North Korean artists and cheerleaders arrived wearing matching coats, fur stoles and hats. About 150,000 people applied for a chance to see a performance by a popular North Korean group.

The two Koreas agreed to march together under a unified flag during Friday’s opening ceremony and to compete in a combined women’s hockey team after a flurry of sports diplomacy that followed North Korean leader Kim Jong Un’s New Year’s address.

Trump has publicly supported South Korea’s efforts to host a successful Olympics, but officials also said the White House sees Pence’s visit as an opportunity to make sure the North Koreans don’t “hijack” the games with a public relations bonanza.

Many officials believe the North is trying to use the Olympics to boost its image in a bid to whittle away at international condemnation and punishing economic measures following a series of missile and nuclear tests last year.

Pence himself tweeted on the eve of his trip that he was headed to the region to “reiterate our commitment to continue to isolate N Korea & ensure N Korea doesn’t use the Olympics to paper over the truth about their regime which oppresses its own people & threatens other nations.”

Longtime allies Seoul and Washington have insisted they’re united in support for the North Korean participation in the games, and diplomats have been working overtime to make sure they’re on the same page with regard to exceptions required to overcome stiff sanctions intended to cripple the communist state.

But Pence’s harsh rhetoric has drawn criticism. One South Korean newspaper decried it as poor sportsmanship.

“North Korea is clearly in the wrong, and no excuses can be made for it. Nevertheless, there is a time and place for everything,” the Hankyoreh newspaper said Thursday in an editorial. “Showing up at someone else’s party and picking a fight with one of their guests betrays a complete lack of respect for the host.”

Rights groups also say North Korea is one of the world’s worst human-rights abusers, with more than 100,000 political prisoners believed to be in gulag-style camps, arbitrary detentions, severe restrictions on freedom of expression and laborers sent overseas to earn hard currency for the regime.

Diplomatic efforts South Korea’s President Moon Jae-in, meanwhile, pressed on with his efforts to use the Olympics détente to promote broader dialogue with all sides after months of heightened tensions.

His office announced he will hold a luncheon Saturday for the North Korean leader’s sister, Kim Yo Jong, and other senior officials leading the delegation to the South for the Olympics.

Pence has left the door open for a possible meeting with the North Koreans but said he hasn’t requested one and any engagement would include his ultimate message that the North must abandon its nuclear ambitions, an issue Pyongyang insists is not up for negotiation.

“There’s some speculation that maybe this is the U.S. trying to demonize North Korea and the North Korean regime in the run-up to the possible use of a military option against North Korea,” he said in a telephone interview.

“I think it’s much more likely that this is simply another way the Trump admin is trying to apply pressure on North Korea as part of their maximum pressure and engagement policy,” he said.

Underscoring the growing threat, North Korea held a military parade and rally on the main spare in Pyongyang on the eve of the opening ceremony. Kim Jong Un walked on a red carpet with his wife at the beginning of the event, which was broadcast on state-run television hours after it ended.

The parade had been widely expected after the North said it would hold a big event to mark the 70th anniversary of the founding of its military and commercial satellite images showed preparations underway.