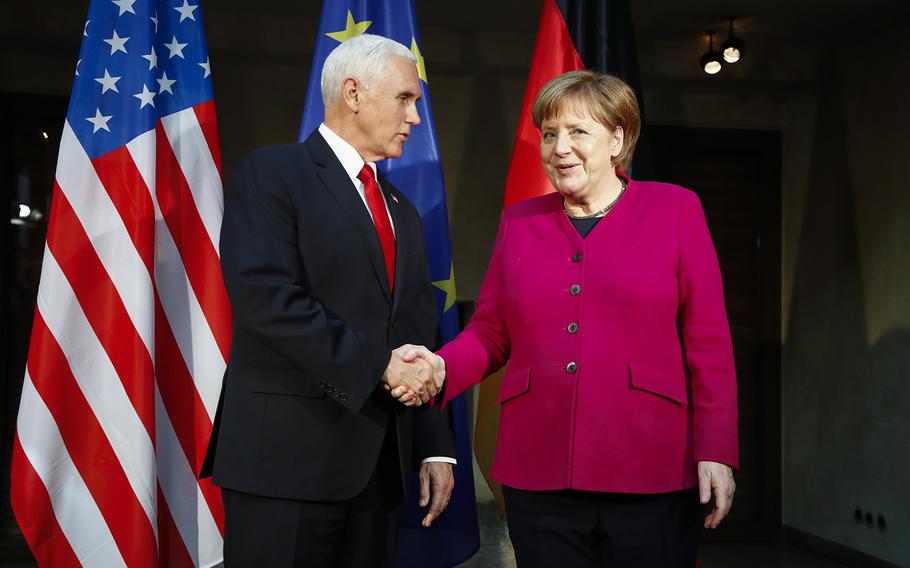 MUNICH— Vice President Mike Pence delivered a hardline message to allies here Saturday, accusing them of undermining U.S. sanctions against Iran and failing to live up to their NATO obligations in a speech that exposed deep divisions between Washington and Berlin.

On defense spending, Pence credited allies for stepping up their investments but demanded that all 29 NATO members hit a 2024 deadline to meet agreed-upon spending targets.

“When you hear President Trump say NATO allies have to live up to their promises, that is what we call being leader of the free world,” Pence said. “The truth is many of our NATO allies need to do more.”

Pence rattled off a list of priorities at the Munich Security Conference, ranging from opposition to a gas pipeline deal between Russia and Germany to a demand that Europe end business dealings with Tehran.

“The time has come for our European partners to withdraw from the Iran nuclear deal,” Pence said.

In Munich, Pence’s tough stance was at odds with priorities laid out minutes earlier by German Chancellor Angela Merkel, who backs the nuclear agreement with Iran that Washington has abandoned. Merkel also called into question the value of a top Trump priority that calls on NATO members to dedicate 2 percent of GDP to military matters by 2024. Merkel says Germany will not meet the deadline and questioned the value of the spending goal.

“Many people are not satisfied with that,” Merkel said, but indicated no plan to satisfy Trump’s spending demands.

Merkel also indicated that things other than military spending such as development aid to countries in need should be counted in some way toward alliance security efforts.

“We are one of the largest donors in the world … it’s just as important in strengthening our alliance,” she said. Merkel also called on partners to preserve international institutions such as the European Union and NATO that she sees as anchors of stability.

“We have to fight for multilateralism and against all those who think they can do it alone,” she said.

Pence sought to reassure his European audience that Washington is as committed as ever to NATO and building up that alliance.

“When we are strong and when we are united, there is nothing we can’t achieve together,” Pence said.

But there remains skepticism about Trump’s commitment to NATO, which he has repeatedly criticized.

“NATO’s single greatest challenge is the absence of strong, principled American presidential leadership for the first time in its history. President Donald Trump is regarded widely in NATO capitals as the alliance’s most urgent, and often most difficult, problem,” wrote former U.S. ambassadors to NATO Nicholas Burns and Douglas Lute in a joint report released at the start of the Munich conference.

“Without a stable Atlantic alliance, everything in my view falls apart,” said Biden, who is mulling a run for the presidency in 2020 and was warmly welcomed by the Munich audience.

But in their report, dubbed “NATO at Seventy: An Alliance in Crisis,” Burns and Lute also found fault with Germany.

“Its coalition government has not summoned the strength and determination to convince the Bundestag (parliament) and the German public to reach the minimum 2 percent level soon,” the report said. “Germany is thus abdicating this most basic obligation as a member of NATO.”

The policy divisions between the U.S. and longtime allies such as Germany have begun to show up in various public opinion polls that indicate America is regarded as a possible threat to European security. On Friday, a poll released by the Freidrich Ebert Stiftung institute in Munich said half of German respondents regard the U.S. as a threat compared with just 33 percent who said the same about Russia.

Such divergent views are reflected in policy differences, such as U.S. opposition to the Nord Stream project that involves constructing a gas pipeline between Russia and Germany.

The U.S. wants Berlin to pull out, but Merkel said “excluding Russia is the wrong strategic signal.”

Merkel also took a shot at Trump’s posture on trade and threats the White House has made against the German auto industry. BMW's largest plant in the world is in South Carolina, Merkel noted. White House complaints are "a bit of a shock to us,” she said.

While Germany doesn’t have troops in northern Syria, Merkel also questioned the U.S. plan to pull out forces there.

“Is it a good thing to pull American troops (from Syria) or will it strengthen Russia and Iran's hand?” Merkel asked. “That is something we very much need to discuss.”

On Friday, acting U.S. Defense Secretary Pat Shanahan said the U.S. wants members of its coalition against the Islamic State to grow, suggesting there could be an opportunity for members to back fill as the U.S. pulls out.

Merkel offered no sign that Berlin would consider such a move, but she did say a key step forward for Germany during her tenure as chancellor was a larger role for the country on the world stage.

“We have to shoulder responsibility,” she said.