Pence arrives in Tokyo, plans to keep heat on N. Korea ahead of Winter Games 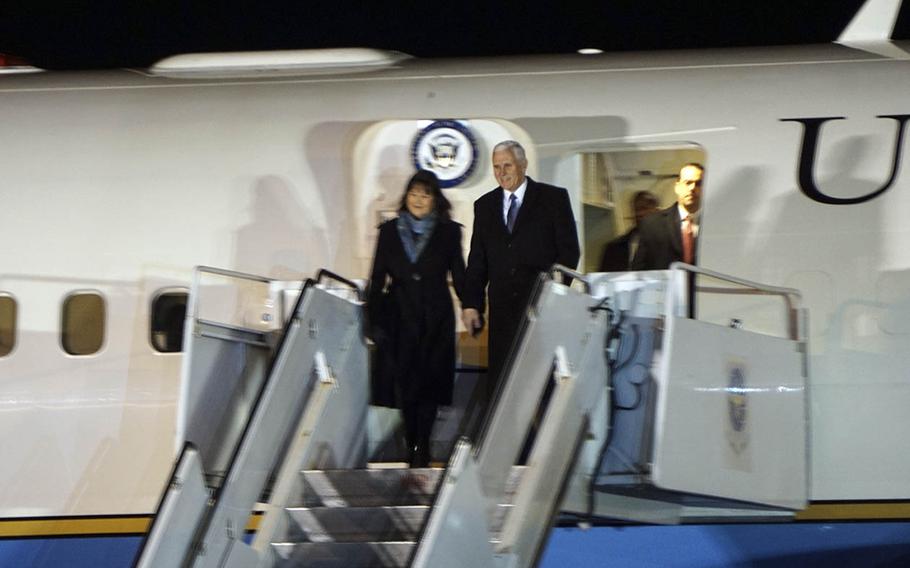 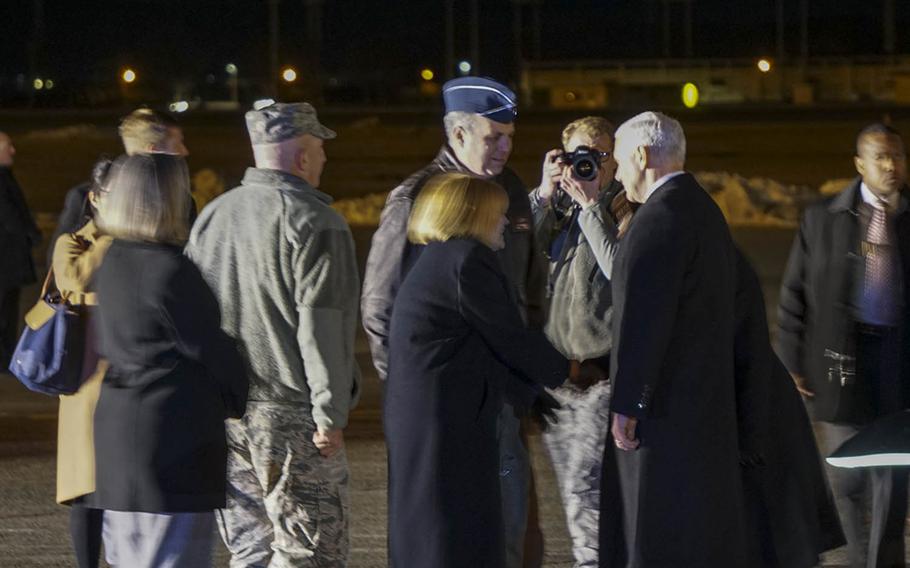 YOKOTA AIR BASE, Japan — Vice President Mike Pence has arrived in the Japanese capital where he’ll engage in talks Wednesday with Prime Minister Shinzo Abe that are expected to focus on the threat from North Korea.

Pence’s plane landed at Yokota, home of U.S. Forces Japan and the 5th Air Force, on Tuesday evening. He and his wife, Karen, walked through an Air Force honor guard and were greeted by U.S. Ambassador to Japan William Hagerty, USFJ commander Lt. Gen. Jerry Martinez, and other military leaders.

The couple was then quickly ushered to an Army Black Hawk helicopter which, for the duration of an approximately 15-minute flight to central Tokyo, would bear the call sign Marine Two.

Pence will be back at the base Thursday to talk to troops and their families before heading to South Korea to meet President Moon Jae-in and lead the U.S. delegation during Friday’s opening ceremonies of the Pyeongchang Winter Olympics.

The vice president’s trip, which included a stop in Alaska on Monday to tour missile-defense facilities, comes amid concerns that Pyongyang will use the games for propaganda purposes. In a Tuesday tweet, Pence said he wants to “ensure N Korea doesn’t use the Olympics to paper over the truth about their regime which oppresses its own people & threatens other nations.”

North Korean athletes will march alongside those from the South during Friday’s opening ceremonies and compete on a unified Korean women’s ice hockey team. The head of North Korea’s parliament, Kim Yong Nam, will attend the games, and there is speculation he might bring a message from the communist state’s leader, Kim Jong Un.

Pence isn’t looking for a meeting with North Korean officials but hasn’t ruled out the possibility of a chance encounter, according to White House officials who spoke to The Associated Press. He plans to hold his own symbolic events to highlight Pyongyang’s human-rights abuses and provocative ballistic-missile and nuclear-weapons tests.

He tweeted Friday: “I’ll travel to Japan & S Korea to attend the Olympics & cheer on our athletes. But I’ll also be there to deliver a message: the era of strategic patience is OVER. As N. Korea continues to test ballistic missiles & threaten the U.S, we’ll make it clear all options are on the table.”

The vice president’s trip is mostly about reassuring America’s allies in the face of the North Korean threat, said Brad Glosserman, a visiting American professor at Tokyo’s Tama University.

“The Japanese want maximum pressure on North Korea,” he said, adding that U.S. talk on the North echoes Japan’s hard line and diverges from the softer approach of South Korea’s center-left government.

The U.S. and South Korea have delayed annual joint war games until after the Winter Olympics and the March 9-18 Paralympics. Abe is expected to advise Pence not to scale back those drills, according to Japan’s Kyodo news agency.

Glosserman said President Donald Trump is in line with Japan rhetorically on North Korea; however, he wants a win.

“If North Korea puts something substantive on the table it’s going to be tempting,” he said.

However, a thaw between the U.S. and North Korea at the Olympics seems unlikely, said Kim Hyun-wook, an American studies professor at Korea National Diplomatic Academy.

Pence will bring to the games the father of Otto Warmbier, the U.S. student who died in 2017 shortly after he was released from North Korean detention. Fred Warmbier’s presence is “not a signal of a softer line,” Kim said.

“He & his wife remind the world of the atrocities happening in N Korea,” Pence tweeted Monday before departing Washington.

Glosserman said Japanese officials might also be interested in discussing Trump’s recent statement that the U.S. could be coaxed back into the Trans Pacific Partnership trade deal between Japan and other Pacific Rim nations.

The TPP sought to build a U.S.-centered free-trade bloc as an alternative to One Belt One Road and other initiatives dominated by China. Trump withdrew the U.S. from TPP within a day of taking office.

Stars and Stripes reporter Leon Cook contributed to this report.