Pedestrian commuters on base encounter an enemy at the gates 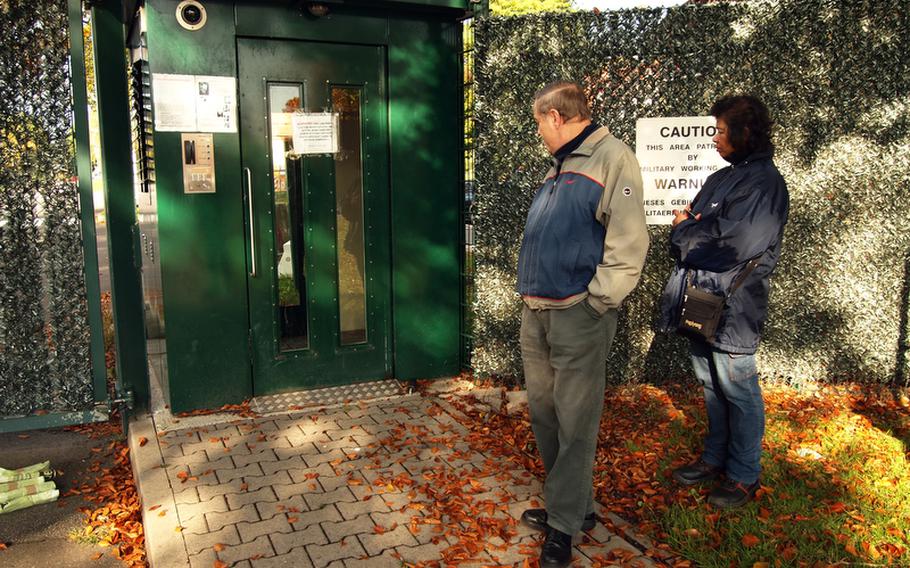 Buy Photo
Guenther Laier and his wife Lamom wait outside Kleber Kaserne in Kaiserslautern for someone to reset an automated pedestrian gate on the fritz. After scanning her ID and getting into the gate&#39;s double-doored booth, an automated voice told Lamom, who works as a cleaner on base, to exit. Then the gate froze up. (Matt Millham/Stars and Stripes)

Buy Photo
Guenther Laier and his wife Lamom wait outside Kleber Kaserne in Kaiserslautern for someone to reset an automated pedestrian gate on the fritz. After scanning her ID and getting into the gate&#39;s double-doored booth, an automated voice told Lamom, who works as a cleaner on base, to exit. Then the gate froze up. (Matt Millham/Stars and Stripes) 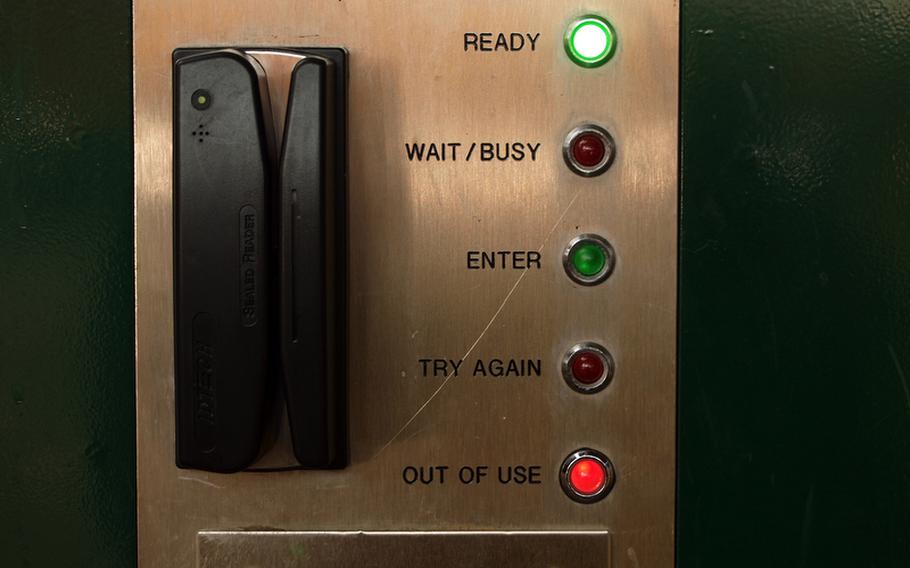 Buy Photo
At Kleber Kaserne in Kaiserslautern, a panel of lights on an automated pedestrian gate tells would-be users that it is both "ready" and "out of use." The gate froze up after denying entry to a pedestrian and had to be reset. (Matt Millham/Stars and Stripes) 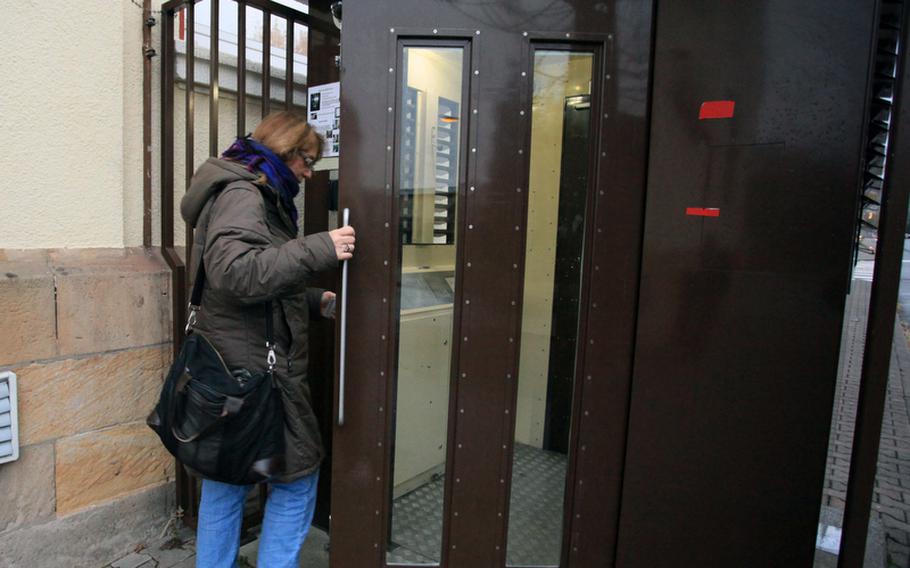 Buy Photo
After once getting booted from this automated gate at Kleber Kaserne, Irene Maschke tries again. The gate kicked her out before she even got her finger on its fingerprint reader, the second of two measures the automated system uses for identification to grant or deny entry to the base. (Matt Millham/Stars and Stripes) 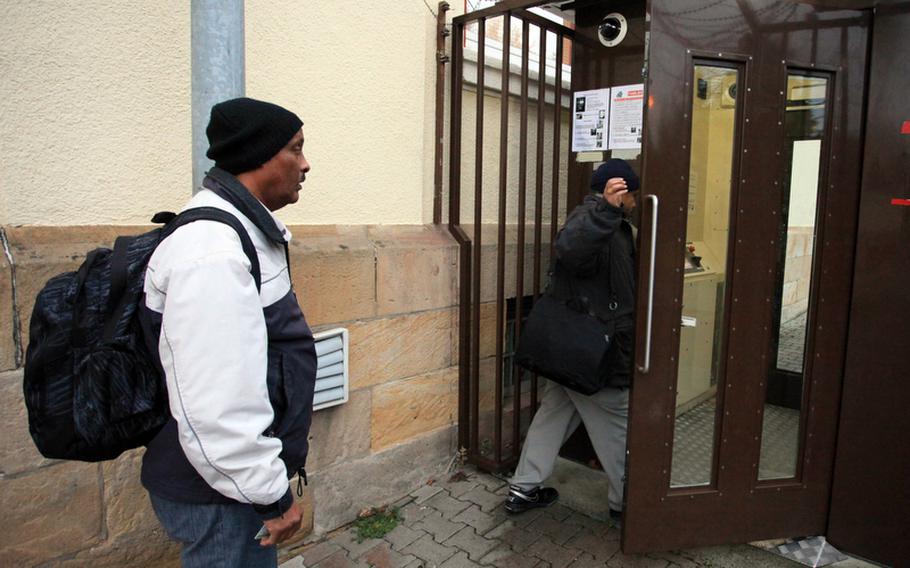 Buy Photo
A worker waits for a colleague to enter Kleber Kaserne, a U.S. Army base in Kaiserslautern, through an automated pedestrian gate. The first man got through fine; after having trouble with the fingerprint scanner, the second man pressed a button to call a guard who buzzed him in. (Matt Millham/Stars and Stripes)

KAISERSLAUTERN, Germany &mdash; From the very beginning, Irene Maschke didn&rsquo;t like them. Then one day, one of them tried to kidnap her.

Standing in front of another recently, she looked ready to brawl. She swiped her ID card. A lock disengaged. Then she opened a heavy door and stepped into one of the automated pedestrian gates that have popped up at Army bases in Europe in recent years.

It kicked her out immediately.

&ldquo;Whoever bought them,&rdquo; she said, preparing to start the process of entering Kleber Kaserne in Kaiserslautern all over again, &ldquo;should be fired.&rdquo;

She&rsquo;s hardly alone in harboring disdain for the Army&rsquo;s Enhanced Security Pedestrian Gates, which look like displaced elevators and hold many a pedestrian commuter&rsquo;s chance of arriving at work on time in their hot little circuit boards.

For many who use them, the gates&rsquo; breakdowns, glitches and inability to handle heavy morning foot traffic can turn a good day bad.

But as the number of American soldiers in Europe dwindles, the gates appear to be multiplying, replacing human guards at gates where, according to a response from U.S. Army Europe, &ldquo;there is not enough pedestrian traffic for it to be financially viable&rdquo; to pay a guard to do what the machines can do.

The first electronic gate was tested in 2006 at Kleber Kaserne. Now, there are at least 22 of the devices on Army installations across Germany and Italy. Each costs anywhere from $270,000 to $490,000 to install and another $18,000 a year to maintain, according to figures provided by USAREUR.

&ldquo;That&rsquo;s a lot of money for something that works half of the time,&rdquo; said Spc. Curtis Thomas, 20, a transportation management coordinator from Atlanta, who uses an unmanned gate at the west end of Kleber about three times a week. Maybe half the time is stretching it; a third of the time, he said, it doesn&rsquo;t work.

At least that&rsquo;s his perception.

Peter Richards, CEO of NetAccess Software Ltd., which makes the gates, said they are operable well above 90 percent of the time. But they aren&rsquo;t meant to handle heavy traffic, he said. Bottlenecks happen.

It is in the early morning, as workers stream onto base and soldiers shuffle to or from their morning workouts that this is most apparent.

Thomas said most of his gate troubles happen when there are 10 or so people waiting to go in or out. And most of the problems involved getting the gate to read their ID cards or fingerprints. Often, users must repeatedly swipe their ID cards. If the fingerprint reader fails to identify them, they may have to exit the booth and try again. Sometimes it&rsquo;s user error. But there are breakdowns as well.

From May through August, there were 74 calls for repairs to gates at 22 locations in Germany and Italy, according to an emailed response from USAREUR, which the command credited to an Army Corps of Engineers office in Alabama. Of those calls, 13 were false alarms, 39 were fixed the same day and 12 were fixed the following day. Five other breakdowns took between three and four days to fix, according to the response, while nine took longer.

Another breakdown was more serious.

&ldquo;One gate, at Coleman Barracks was down for several days after someone was locked in and a lock had to be broken to let the person out,&rdquo; according to the Army engineers&rsquo; response, which noted the person was &ldquo;let out quickly&rdquo; after the gate malfunctioned, &ldquo;but the repairs took several days.&rdquo;

&ldquo;As for the repair cost, the records show a technician arrived and cut the lock within an hour after being called,&rdquo; a spokesman for USAREUR wrote in a follow-up email. &ldquo;The new lock was acquired and replaced six days later at a cost of $357 for the lock, plus just over two hours labor (the technician replaced the lock and some damaged rivets and repainted the damaged area).&rdquo;

Maschke had a similar encounter with a gate.

&ldquo;One time I was locked up in it,&rdquo; she said.

As usually happens when something goes wrong with the gates &mdash; monitored by vehicle-gate guards around the clock &mdash; a guard responded when she pushed the button for assistance.

That time, though, &ldquo;the gate guard didn&rsquo;t know how to open the gate and couldn&rsquo;t let me out. And I stood there for about 10-15 minutes,&rdquo; Maschke said. &ldquo;It&rsquo;s a good thing I&rsquo;m not claustrophobic.&rdquo;

Despite the cost of installation and maintenance, USAREUR says the automated gates are less expensive than guards. However, no officials queried for this story would provide details of the cost of guards due to concerns about prejudicing a contracting process.

The contract for gate guards &ldquo;is in the active solicitation process, and those costs are considered proprietary information and releasing them could disrupt the contracting and bidding process,&rdquo; USAREUR spokesman William Roche wrote in an emailed response.

Roche did not confirm figures provided in a 2009 article from the U.S. Army Garrison Baden-W&uuml;rttemberg public affairs office, which said manning a gate 24 hours a day throughout the year cost $190,000. But he did refer to the story in a comparison he said showed the automated gates were less expensive than guards.

&ldquo;The guard cost alone for three years at the 2009 rate would total $570,000,&rdquo; Roche wrote. &ldquo;If you look at the figures for installation and add the current figures for annual maintenance costs for an electronic gate, a gate in operation for three years would cost from $324,000-$544,000 (depending on the installation cost). This is a pretty unscientific way of doing the math, and doesn&rsquo;t take any cost increases or decreases over those three years into account, but it&rsquo;s enough to see the gates save money.&rdquo;

First Lt. Andrew Carlisle, 32, a member of the 266th Financial Management Center who uses an unmanned gate at Kleber every day, doesn&rsquo;t doubt the gates can save money. But he questions whether the savings is worth the frustration and time.

&ldquo;I slide my card, first of all, 100 times,&rdquo; he said. Once he&rsquo;s in the box, &ldquo;I can&rsquo;t get in fast enough&rdquo; to get his finger on the fingerprint scanner.

The gate&rsquo;s automated male voice usually tells him to &ldquo;exit the booth&rdquo; and try again. &ldquo;So eventually I have to hit the call button,&rdquo; he said.

In the end, it&rsquo;s often a guard watching a monitor in a nearby booth that either lets him in or tells him to stroll around to a drive-in gate, a trip that adds more than half a mile and 10 minutes to his walk.

Roche would not say how much of the vehicle gate guards&rsquo; time is dedicated to watching the monitors, nor the cost of having them do so.

&ldquo;I think they&rsquo;re very convenient,&rdquo; said Banks, who uses the gates every day, &ldquo;especially when the parking lot is full.&rdquo;

A German park-and-ride lot outside Kleber is almost always empty, unlike the base&rsquo;s lots, which are frequently crowded.

&ldquo;I mean, they don&rsquo;t always work,&rdquo; she said of the gates, &ldquo;but I think the guys at the gate pretty much know me because I talk to all of them. So if I&rsquo;m having issues with my fingerprint, you know, I just take off my hat, wave at the camera, and they&rsquo;ll buzz me through.&rdquo;