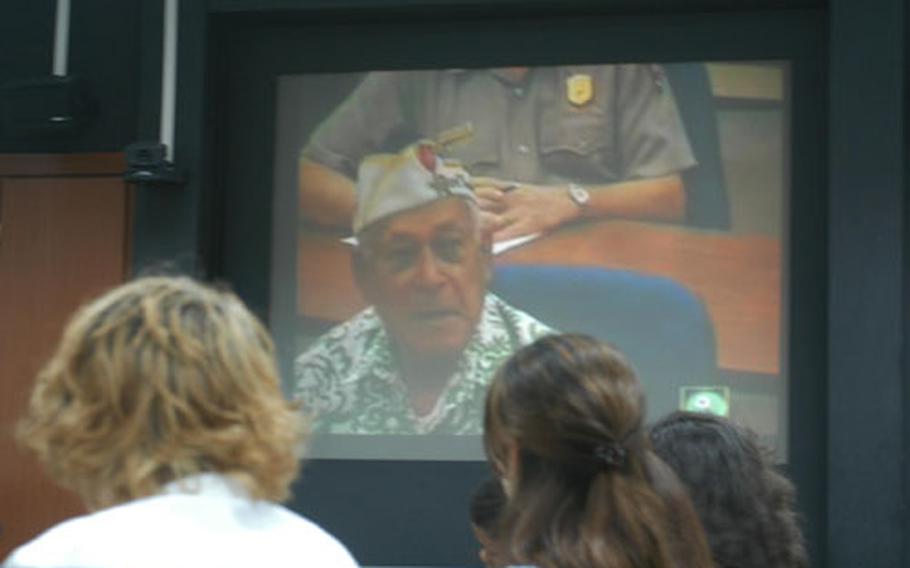 Students listen to World War II veteran Herb Weatherwax talk about his experiences in the attack on Pearl Harbor and his life afterward during a video teleconference Wednesday at Caserma Ederle. The students, taking U.S. history, got a chance to listen to three survivors of the attack and ask them questions. (Kent Harris / S&S)

VICENZA, Italy &#8212; History came to life Wednesday for a group of students at Vicenza High School.

Thanks to some technical help from the military and a program sponsored by private and public organizations, three survivors of the Japanese attack on Pearl Harbor shared stories and answered questions from students via a video teleconference call.

Cynthia Pierson, the equal employment opportunity officer for the 22nd Area Support Group, found an article on the Internet about a group in Hawaii that&#8217;s recently been using technology to put veterans in touch with classes in the States.

Sponsored by the Pearl Harbor Survivors Association and the Arizona Memorial National Park, &#8220;Witness to History&#8221; has appeared in a dozen schools across the States since starting in February.

Pierson, looking for some tie-ins with Asian Pacific Heritage Month, persuaded them to try the program at Vicenza.

Wednesday morning&#8217;s session was the first at a military-funded school &#8212; in the States or abroad.

The connection was good.

Students could clearly see the expressions on the men&#8217;s faces as they spoke. The hookup lasted for just more than an hour, partly because of the time difference.

Hyland, who spent more than nine months in the hospital after the attack, drew several laughs from the students during his talk.

Asked how they dealt with stress after surviving the attack on Dec. 7, 1941, Hyland said he wasn&#8217;t awake to remember too much.

He said he remembered waking and complimenting an orderly on the food they were serving in the hospital.

But Hyland, Tom Unger and Herb Weatherwax all had serious information to pass along.

They spoke about their personal stories during the attack and tried to remember what their reaction.

&#8220;Surprise, surprise and shock,&#8221; said Weatherwax of his immediate thoughts during the attack.

Asked by a generation of students studying history decades after the events, they all said they had no qualms about dropping two atomic bombs on Japan towards the end the war.

Thanks to modern communications, he was back again Wednesday to share his experiences.