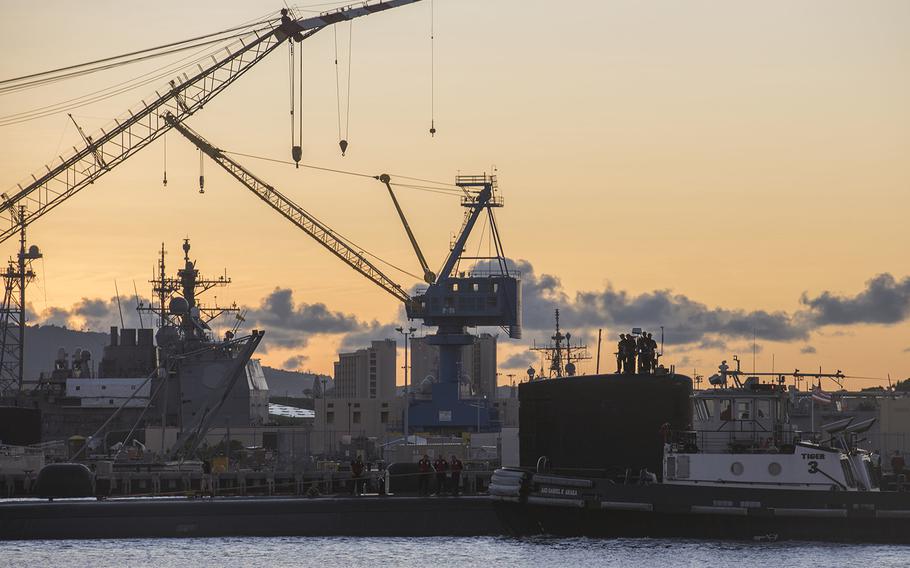 FORT SHAFTER, Hawaii — A sailor who shot three civilian shipyard workers Wednesday, killing two and then himself, has been identified as 22-year-old Gabriel Romero, according to The Associated Press.

Romero, who has not been officially identified by the Navy, was assigned to the USS Columbia, a Los Angeles-class attack submarine undergoing maintenance at the shipyard. His rank is unknown.

He “opened fire on shipyard personnel with his M4 service rifle and then turned his M9 service pistol on himself,” Fox News Pentagon reporter Lucas Tomlinson wrote in a tweet Thursday quoting a preliminary incident report.

“We don’t have a lot of details yet,” Adm. Michael Gilday, chief of naval operations, said during a forum Thursday in Washington, D.C. “We’re pretty sure that he acted alone, but we don’t have those details yet. There’s a lot of interviews ongoing right now.”

The third victim, a 36-year-old man, was listed in stable condition Thursday at Queens Medical Center in Honolulu, according to a hospital spokesperson. Gilday said the man was wounded in the hip.

The Honolulu Medical Examiner’s Office referred all queries about victims’ identities to the communications office for Honolulu Mayor Kirk Caldwell, which had no further information.

The AP identified one victim as Vincent Kapoi Jr., 30, of Waianae, a small town on Oahu’s west coast.

His wife, Tara Kapoi, said the family had no information about the shooting’s circumstances and asked for privacy, the report said.

The couple had married in April, according to social media accounts. Vincent Kapoi began a regular podcast earlier this year called “Take Control of your Finances and Wealth,” offering advice on becoming debt free.

The joint base went on lockdown for several hours almost immediately after the shooting.

Navy Region Hawaii announced Thursday morning that the base was resuming normal operations except for nonessential personnel at the shipyard.

Capt. Greg Burton, the shipyard’s commander, said in a Facebook posting to employees Wednesday that Joint Base Pearl Harbor-Hickam and Naval Criminal Investigative Services are conducting a full investigation.

“I know that no words will convey the full measure of sorrow from today’s tragedy,” he said. “This loss will be felt throughout our shipyard ‘Ohana, greater shipyard & NAVSEA family, submarine force, and the Navy as a whole.”

The union representing the shipyard victims, the International Federation of Professional and Technical Engineers, said in a statement Thursday that “no worker should have to go to work without the expectation of safely returning to their family and loved ones.”