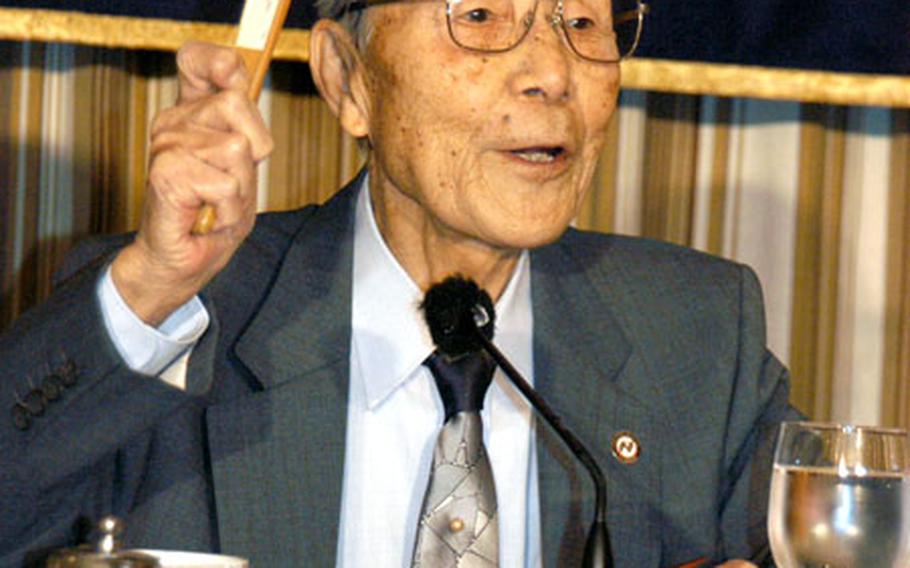 Lt. Zenji Abe, a Japanese Navy pilot during the attack on Pearl Harbor, spoke Monday about his experiences and thoughts on the war during a lecture at the Foreign Correspondents Club of Japan in Tokyo. (Juliana Gittler / S&S)

TOKYO &#8212; On Dec. 7, 1941, Japanese navy pilot Lt. Zenji Abe boarded a dive-bomber on the aircraft carrier Akagi about 200 miles off the coast of Oahu, Hawaii, to participate in one of the most significant events in U.S. military history.

He was part of the Japanese attack on Pearl Harbor and is believed be to among those responsible for attacking and sinking the USS Arizona, which claimed 1,177 American lives.

As the world marks the 60th anniversary of the end of the World War II, Abe spoke to journalists Monday in Tokyo about his wartime experience, about why he believes Japan launched the attack and who was ultimately responsible.

In the decades since, many people have asked Abe about his memories and emotions that day, he said through a translator.

He felt neither excitement nor fear, he said.

Now nearly 89 and suffering from cancer, Abe wanted to speak about the war one more time.

His speech provided justification and remorse for the course of the war and gave his thoughts on how it has affected modern Japan.

On the one hand, he said, Japan&#8217;s position at the time made some type of change necessary.

At the time of the attack on Pearl Harbor, Japan was suffering one of the worse economic crises in its history, he said. Devastatingly poor in the early part of the 20th century, Japan invaded China and fought a 10-year war.

It was under that backdrop and amid U.S. economic pressures on Japan, the fear of occupation by a host of countries including the United States, and the failure of diplomacy that war became necessary, he said.

However, he added, he and his shipmates were told that Japan would announce a declaration of war before the attack to warn people.

It wasn&#8217;t for more than 20 years that he learned the people he attacked were not aware they were at war.

Such warning was essential, he added, under Japan&#8217;s warrior code, called bushido, which emphasizes honor and virtue among warriors and condemns surprise attacks and unfair battles.

Under those principles, Abe said, the emperor&#8217;s war advisers should have accepted responsibility for their mistakes and committed ritual suicide once Japan surrendered.

Those leaders are the same 14 Class A war criminals enshrined in the Yasukuni Shrine, a war memorial for the spirits of people killed in war, who spark protests whenever a Japanese prime minister visits the shrine.

Abe said the 14 shouldn&#8217;t have been enshrined there, and he blames them for the war, its outcome and to some degree the fate of modern Japan.

Abe said losing the war and the code of bushido, with its basis in Confucianism, affects the country today.

Without bushido, Abe said, corruption and crime are escalating, and as the war slips further into history, so does the national consciousness and memory of how Japan acted, what he called a distorted awareness of history.

Regarding relations with the West, he added: &#8220;I think Japan could have made a great[er] diplomatic effort.&#8221;