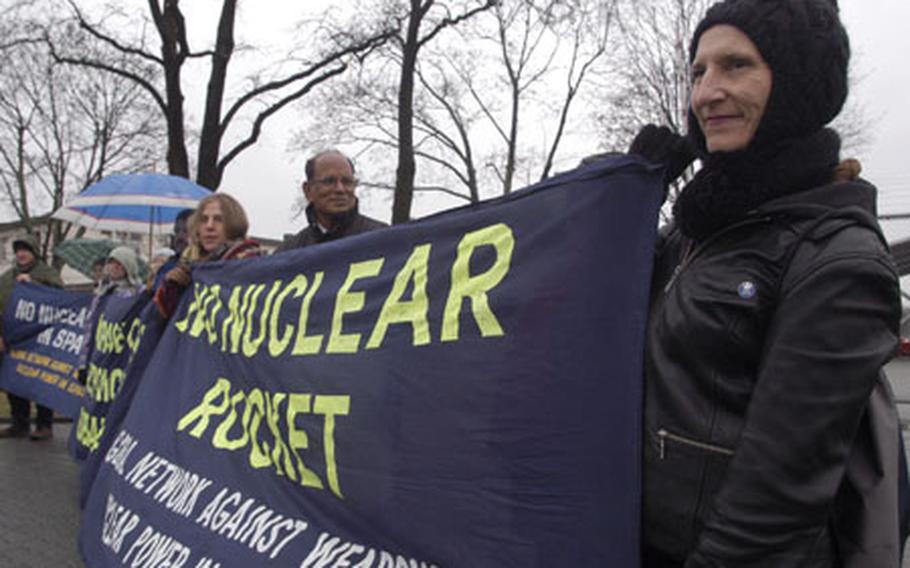 Linda Richards, an American and former Army brat who lives in Oregon, holds a banner Saturday at a rally outside the August-Euler Airfield in Griesheim, Germany. Richards, the daughter of a retired Army lieutenant colonel, was among more than 40 people who came from around the world to participate in a two-day conference and rally in Darmstadt and neighboring Griesheim to protest the militarization of space and U.S. spy bases in Europe. (Matt Millham / S&S)

GRIESHEIM, Germany &#8212; A peaceful demonstration held Saturday outside a U.S. military compound to raise awareness of the militarization of space by the United States and its allies served mostly to preach to the converted.

Roughly 40 protesters, in the area for a two-day conference organized by the Global Network Against Weapons and Nuclear Power in Space, listened quietly as activists from the United States, England and Australia delivered somber speeches at the entrance to a U.S. military intelligence-gathering facility on the August-Euler Airfield.

A small number of Army radomes, used to house sensitive signal-gathering satellite dishes, were both the backdrop and a subject of the rally.

&#8220;I think if people knew of the plans the U.S. has for dominating space and dominating the globe, they wouldn&#8217;t support it,&#8221; said Linda Richards, who traveled from her home in Ashland, Ore., for the conference and rally.

Richards, whose father is a retired Army military intelligence officer, lived as an Army brat in Stuttgart from 1976 to 1980, but hasn&#8217;t been to Germany since.

She listened intently as fellow American Loring Wirbel, author of &#8220;Star Wars: U.S. Tools of Space Supremacy,&#8221; speculated that the radomes are part of the secretive &#8220;Echelon&#8221; signals intelligence and analysis network, which is rumored to scan e-mail, telephone conversations and faxes with sophisticated computer software.

U.S. Navy Europe in London, which ran the facility when it opened in 2004, could not be reached Saturday for comment.

However, the National Security Agency, which is alleged to operate Echelon, has not confirmed its existence. Former CIA director George J. Tenet, in testimony before the U.S. House Permanent Select Committee on Intelligence in 2000, referred to the &#8220;so-called Echelon program of the National Security Agency,&#8221; in discussing intelligence gathering by U.S. spy agencies, but did not say explicitly whether the program existed, according to a transcript on the CIA Web site.

Helen John, who was arrested numerous times for breaking into U.S. bases in and around her native Menwith Hill, England, with the intent of damaging intelligence facilities there, followed Wirbel.

The 69-year-old John, who campaigned for Parliament from prison after she cut a fence guarding a U.S. base, said, &#8220;I&#8217;m old enough not to be confused,&#8221; meaning that she knew what she was doing when she intruded.

The rally stopped traffic in and out of the airfield and an adjoining compound, home to Stars and Stripes&#8217; European headquarters and a small housing area, for a little more than an hour. After the rally ended, participants distributed informational leaflets at nearby shopping areas.