Peace and progress in Ramadi 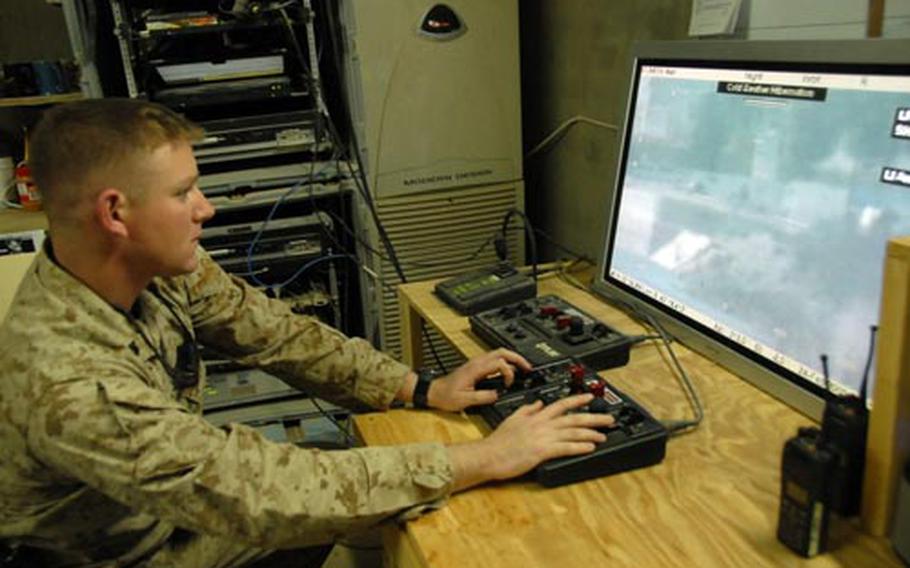 Staff Sgt. Marlin Adams scans a camera that looks into Ramadi from a room inside Adalla, a joint security station on the outskirts of the city. Marines say Anbar province is becoming safer, and the number of improvised explosive devices going off near Adalla has decreased in recent months as Marines have stepped up their observations there. (Ashley Rowland / S&S)

Staff Sgt. Marlin Adams scans a camera that looks into Ramadi from a room inside Adalla, a joint security station on the outskirts of the city. Marines say Anbar province is becoming safer, and the number of improvised explosive devices going off near Adalla has decreased in recent months as Marines have stepped up their observations there. (Ashley Rowland / S&S) 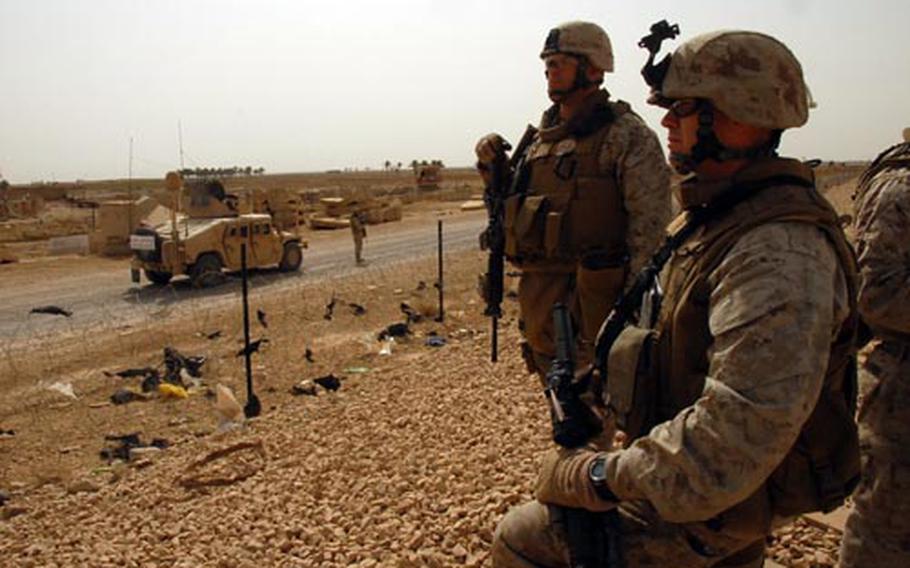 RAMADI, Iraq &#8212; In a chandelier-topped sitting room lined with some of the most powerful men in the city, the sheik in a gold-tasseled robe listened attentively as Lt. Col. Thad Trapp listed his biggest concerns for the area: Getting farmers enough fertilizer, seeds and water.

In Ramadi, talking about irrigation instead of insurgents would have been unthinkable a few years ago, when al-Qaida in Iraq virtually ruled the city and used an amusement park in the center of town as its beheading site.

But Ramadi and the rest of Anbar province are now some of the quietest places in Iraq, thanks in part to Sunnis who turned against al-Qaida and began cooperating with the United States. Now, the U.S. is relying less on military power and more on strengthening its ties with local leaders and economic- and government-building projects to maintain the peace.

"It wasn&#8217;t until we formed a partnership with the sheiks and the people of Iraq that we began to see some progress," Trapp, commander of 2nd Battalion, 9th Marines, told Sheik Sa&#8217;ad Nayif Mishan al-Aethawi.

That progress is especially notable in Ramadi, where for nearly two weeks, there have been no sniper bullets, no car bombs, no suicide bombers &#8212; no "significant kinetic actions" against the Marines of 2/9, Trapp said. It is the longest period of time that the battalion has gone without even a minor attack since arriving in Iraq last September.

The calm is apparent at other bases in Anbar. At Al Asad Air Base, the largest U.S. military installation in the province, most Marines rarely, if ever, leave the base &#8212; a far cry from a few years ago when they regularly patrolled the region&#8217;s neighborhoods. Some said their deployment had been a waste of time.

"I didn&#8217;t know it would get better as fast as it had," said Cpl. Matais Tafoya, a personal security detail driver now on his third deployment.

He said the Iraqis are happier with the Marines, in part because of new rules outlining a slower escalation of force. Incidents in which civilians were killed or had property damaged seriously hurt the Marines&#8217; reputation.

"It&#8217;s changed considerably since the first time," he said.

Staff Sgt. Sid Gonzalez said he feels much safer during this deployment, his third to Iraq.

"I feel a lot safer this time. There&#8217;s an obvious difference in the Iraq of today and the Iraq of yesterday," he said. "The ISF (Iraqi security forces), they&#8217;re like neighborhood watches. Those guys basically got tired of getting hassled by the bad guys, and they stood up and took charge."

The Iraqis are now doing jobs once handled by civilian contractors, he said.

"They&#8217;ve really been able to stand on their own two feet in the last eight to nine months," he said.

Back in Ramadi, the sheik told Trapp that Anbar&#8217;s newly elected provincial council needs to be stronger than its current government, a mix of appointees and elected officials, if the region is to progress.

He said the council asked the chief of police to quit several times, but the chief said no.

"Which time? Because the council&#8217;s told him to quit several times," Trapp said.

At a North Ramadi city council meeting last week, members complained about the lack of trash pick-up, holes left in the street after a sewage construction project, drugs and Iraqi police officers shooting their AK-47s in the air to control traffic.

The city&#8217;s biggest problem is the electricity, they said. Most families get about two hours a day and don&#8217;t know when it will turn on and off.

But there is doubt that the stability will last. Professor Rahim Khalaf Mohammed al Aethowi, vice president of the council, said many Iraqis believe that democracy isn&#8217;t working because positions of authority can be bought.

He is afraid that when the Americans leave, a group like Saddam Hussein&#8217;s Baath Party will take over.

"We are frightened something will happen, we don&#8217;t know what," he said. "We are scared for the future. We trust nobody."