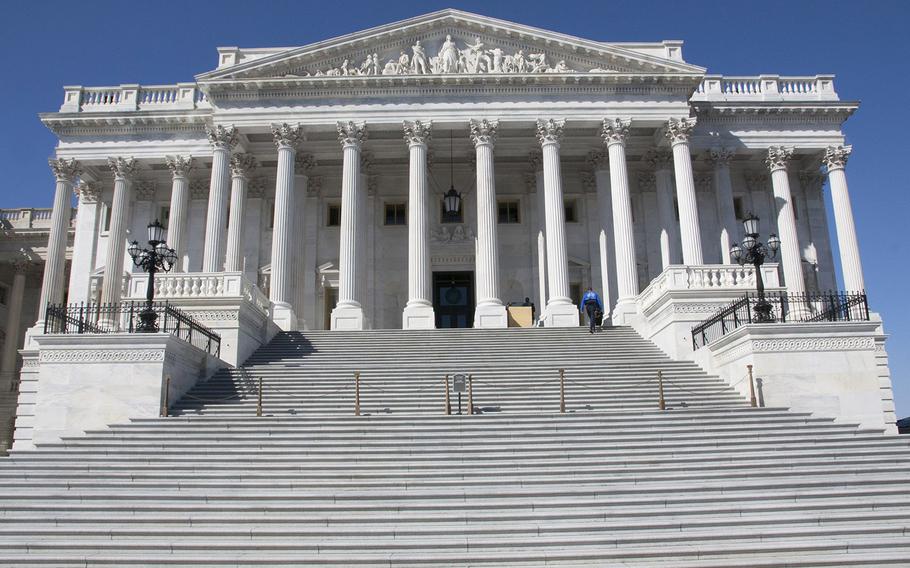 The U.S. Senate building adjacent to the U.S. Capitol in Washington. (Stars and Stripes)

WASHINGTON — Pay raises for servicemembers, funds for new ships and aircraft as well as a boost to missile defense could be implemented if the Senate’s proposed $700 billion defense bill is approved in the coming days.

Lawmakers are slated to consider hundreds of potential amendments to the massive spending plan, such as protecting transgender servicemembers.

Some of those amendments could set up a few battles on the Senate floor, though some lawmakers contend the overall proposal is in strong shape to gain approval.

“It looks pretty good,” Senate Majority Whip John Cornyn, R-Texas, said Monday night of the bill’s outlook. It could get moved through “this week or early next week.”

The Senate’s version of the National Defense Authorization Act was stalled during in the summer, but passed a procedural hurdle Monday night. The effort sets up debate on the bill as early as Wednesday.

There’s plenty of discussion that could be considered. Among the amendments, there’s a bipartisan proposal by Sen. Kirsten Gillibrand, D-N.Y., and Sen. Susan Collins, R-Maine, to prevent a military transgender ban.

Already, the defense bill underwent a series of setbacks earlier this year, and it wasn’t clear whether Senate members would get the chance to tackle the proposal this month.

However, a surprise deal reached between President Donald Trump and leading Democrats opened up a tight September originally focused on looming and critical deadlines.

The deal, signed by Trump on Friday, approved a $15 billion aid package for Hurricane Harvey and extended federal funding and the debt ceiling for at least three more months, pushing a more long-term plan to December.

A new round of funding was needed for the 2018 budget, which starts Oct. 1.

Now lawmakers say they are ready to tackle the defense bill. The effort was delayed in July when one of the bill’s major architects, Sen. John McCain, R-Ariz., was diagnosed with brain cancer and underwent surgery.

On Tuesday, his office said he would continue to seek treatment at a Bethesda, Maryland hospital as he maintains his regular Senate duties.

McCain, chairman of the Senate Armed Services Committee, has said the NDAA is critical because it addresses the issue of rebuilding the military after years of budget cuts.

There were signs of that erosion this summer when 42 servicemembers died in military accidents, McCain said Monday on the Senate floor. During the last three years, 185 have died.

Among those servicemembers who perished, the Navy lost 17 sailors during the summer in separate collisions involving the USS Fitzgerald and the USS John S. McCain.

“The state of our military is eroding, we saw disturbing evidence of this reality over the summer,” McCain said. “We are killing more of our own people in training than our enemies are in combat. And that didn’t happen by accident.”

Senate Majority Leader Mitch McConnell, R-Ky., lauded McCain’s effort, tweeting that his “unfailing” commitment to “our nation’s heroes” is why he was back in the Senate.

Either House or Senate plan would require congressional action to exceed the current budget cap of $549 billion. If the budget cap is exceeded, it raises the threat of sequestration -- automatic across-the-board cuts enacted under the Budget Control Act of 2011.

The Senate proposal, for now, authorizes a 2.1 percent pay raise for armed forces members, $10.6 billion for a F-35 Joint Strike Fighter aircraft program, $25 billion in new ships and $8.5 billion for missile defense, which is $630 million more than was requested by the Trump administration. The legislation also addresses the streamlining of Pentagon management and addresses new cybersecurity efforts. Lawmakers could also consider a new round of base closures that could add up to savings for the military.

The defense bill has drawn some objections as well.

Though it was approved unanimously by the Armed Services Committee, it met a hurdle with Sen. Rand Paul, R-Ky.

Paul has resisted efforts for the bill to be considered without debate on his amendment to reconsider the Authorization for Use of Military Force, or AUMF, which was used in 2001 and 2002 to authorize the wars in Afghanistan and Iraq.

On Monday, Paul said he had reached a deal with McConnell for his amendment to be considered, but not without expressing some frustration.