Pave Low personnel on the move 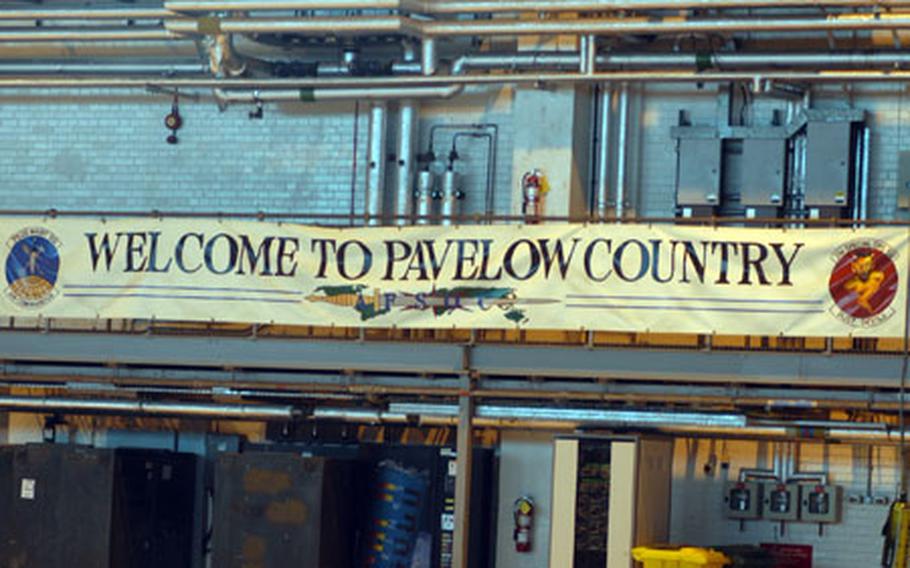 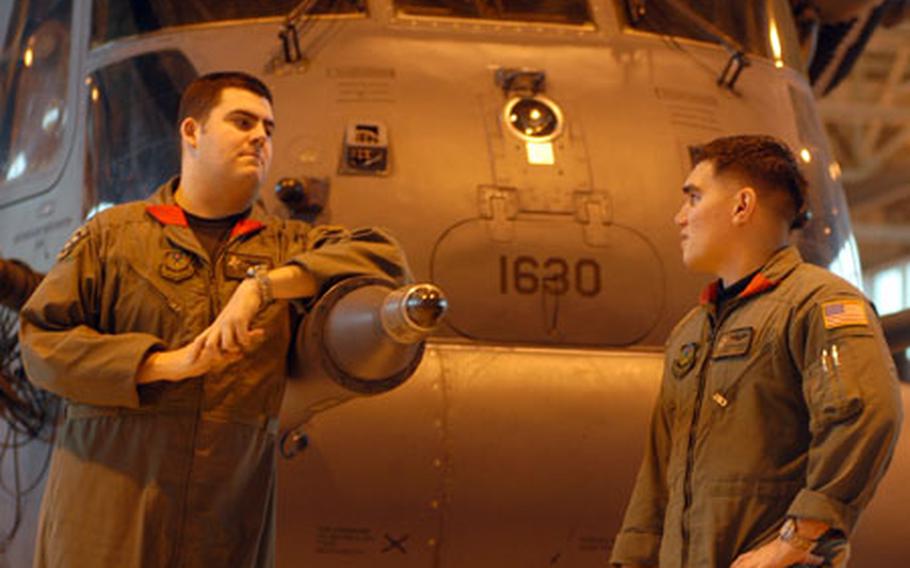 Capt. Charlie Mauze, 27, left, and Senior Airman Justin Shults, 24, chat about their future after the deactivation last this year of the MH-53J Pave Low helicopter in the background. (Bryan Mitchell / S&S) With the coastline of Beirut, Lebanon, in the background, an MH-54 Pave Low helicopter sits on the back of a U.S. Navy ship being used to help evacuate American citizens from the war-torn country in this file photo. (Ben Murray / S&S)

RAF MILDENHALL &#8212; The Air Force&#8217;s most dynamic unit in the United Kingdom will lose roughly a quarter of its personnel later this year due to the planned deactivation of it aging fleet of helicopters.

The 352nd Special Operations Group will say goodbye this fall to 250 airmen who operate, maintain and serve as engineers and gunners on the MH-53J Pave Low helicopter, SOG commander Col. Brad Webb said.

The 21st Special Operations Squadron currently maintains a fleet of five Pave Low choppers as one of six squadrons that make up the 352nd SOG, which has about 1,000 airmen.

The chopper, which costs about $40 million, is being deactivated throughout the Air Force special operations force and is slated to be replaced by the CV-22 Osprey vertical-lift, fixed-wing aircraft in the next several years.

Due to the increasingly joint nature of special operations, the Army will, in the future, supply the helicopter needs for special-operations missions, according to Webb.

&#8220;When we need specific rotary wing capabilities, it will have to be requested through SOCEUR (Special Operations Command Europe),&#8221; Webb said. &#8220;And the U.S. Army Special Ops Command will be tasked with supplying the aircraft.&#8221;

The Sikorsky-built Pave Low is designed with air refueling capability for long-range infiltration of troops or getting troops out of enemy territory and is considered the most technically advanced helicopter in the Air Force&#8217;s inventory.

It boasts advanced avionics, mapping and global positioning technology that allows the massive chopper to follow the Earth&#8217;s terrain day or night in adverse weather conditions. It&#8217;s also heavily armored and can be armed with either 7.62 mm &#8220;miniguns&#8221; or .50-caliber machine guns.

&#8220;These are an aircraft you can count on,&#8221; said Webb, who has flown the Pave Low throughout his special-operations career in Afghanistan, Iraq and Bosnia and Herzegovina. &#8220;We had one that was struck by an RPG (rocket-propelled grenade) in Fallujah (Iraq), and it still landed safely. That says a lot right there.&#8221;

The Pave Low also was the workhorse of the 352nd&#8217;s latest evacuation effort in Lebanon last summer, shuttling American evacuees from the war-torn nation onto a nearby Mediterranean island and waiting ships.

While losing the aircraft will be bittersweet to the unit, the greater loss will be the inevitable diaspora of the roughly 250 affected airmen across the Air Force.

&#8220;Some guys may not even have to PCS and some guys we will work hard to keep in the AFSOC (Air Force Special Operations Command), but some will have to move out of the SOG into other areas in the Air Force,&#8221; he said.

Capt. Charlie Mauze, 27, of Wilson, N.C., is a Pave Low pilot who will cross-train to pilot the Osprey.

Mauze acknowledges a bittersweet mood in the 21st SOS with only months left manning the Pave Lows, but said he&#8217;s enthusiastic to be part of the first wave of Air Force special-operations officers to take on a new aircraft.

Flight engineer Senior Airman Justin Shults, 24, of Marysville, Calif., who doubles as an aircraft gunner, will be leaving the special-operations community, but not the challenging environment of helicopter engineering.

He will be transferring to Andrews Air Force Base, Md., to help shuttle VIPs around the capital.

RAF MILDENHALL &#8212; The controversial CV-22 Osprey is slated to come on board the 352nd Special Operations Group inventory over the next several years.

The vertical-lift, tilt-rotor aircraft, however, will not necessarily replace the MH-53J Pave Low helicopter, according to SOG commander Col. Brad Webb.

The aircraft, designed and built by Boeing and Bell Helicopter Textron Inc., is capable of much greater range and much higher speeds than the Pave Low and also has air-refueling capability, according to Boeing&#8217;s Web site.

It is currently used by the U.S. Marine Corps, U.S. Navy, and the U.S. Air Force Special Operations Command.

The Osprey, which can carry 24 troops, has a cross-coupled transmission so either of its two engines can power the rotor if one fails.

The rotors fold and the wings rotate so the aircraft can be stored onboard an aircraft carrier or assault ship.

The Osprey has been steeped in controversy since its inception.

Dick Cheney tried to cancel the program during his tenure as defense secretary under President George H.W. Bush, but Congress continued to provide funds for the aircraft, according to a 2005 Congressional Research Service report.

The aircraft has a history of crashes that include more than two dozen fatalities, the CRS report states.

Despite past difficulties in both safety and cost, officials in the Defense Department have opted to forge ahead with the Osprey as an aircraft of the future, including at RAF Mildenhall.