Shadows of MH-53M Pave Low helicopters cast down on a dirt farmfield during a final flight across the English countryside. Five Pave Lows from the 21st Special Operations Squadron, which will inactivate next month, conducted a final flight. (Sean Kimmons / S&S)

Shadows of MH-53M Pave Low helicopters cast down on a dirt farmfield during a final flight across the English countryside. Five Pave Lows from the 21st Special Operations Squadron, which will inactivate next month, conducted a final flight. (Sean Kimmons / S&S) 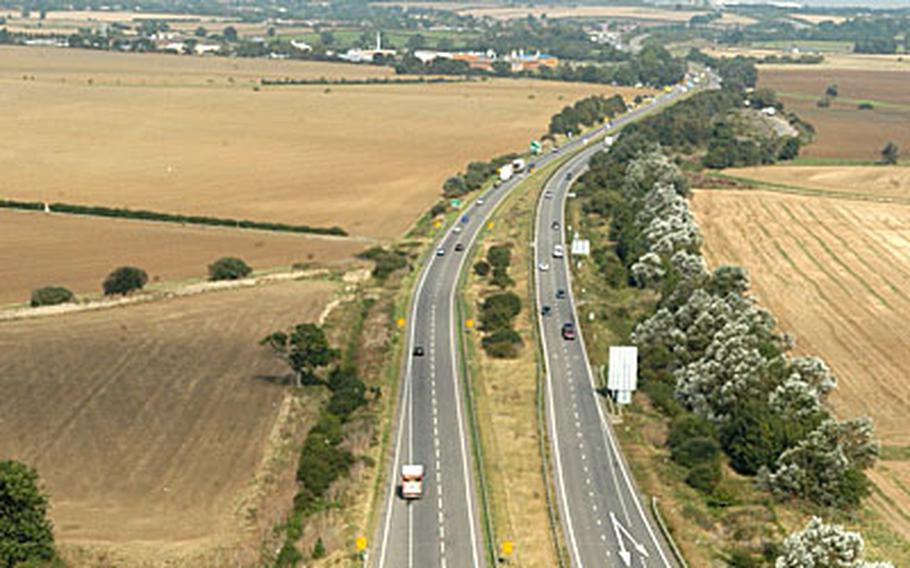 A MH-53M Pave Low helicopter crosses over a highway along a final flight. The squadron is based at RAF Mildenhall. (Sean Kimmons / S&S) A MH-53M Pave Low, part of a five-helicopter formation, is refueled by a MC-130P Combat Shadow during the helicopter&#39;s final flight. (Sean Kimmons / S&S) 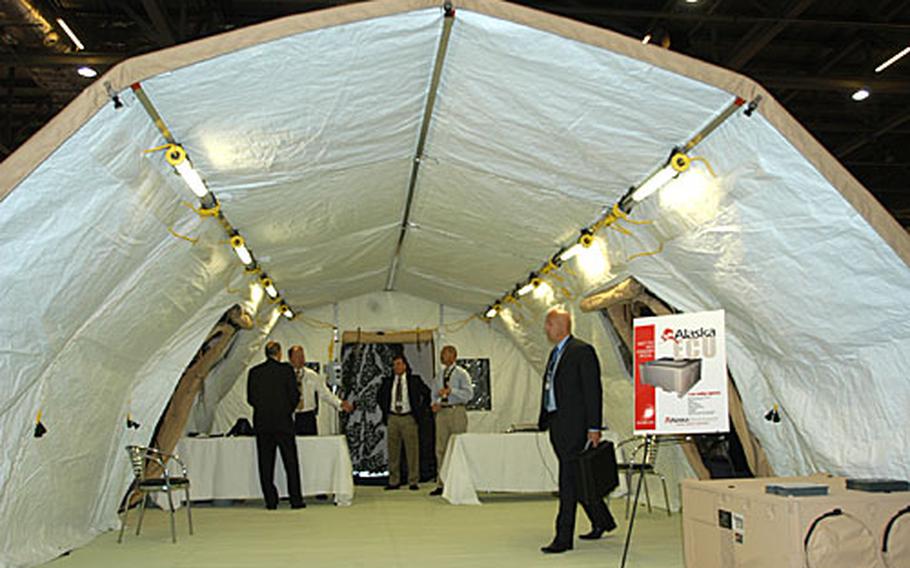 Staff Sgt. Jordan, a Pave Low aerial gunner, unloads rounds from a .50 caliber machine gun at a traget in the North Sea. Five Pave Lows from the 21st Special Operations Squadron, which will inactivate next month, conducted a final flight Thursday. The squadron is based at RAF Mildenhall. (Sean Kimmons / S&S) 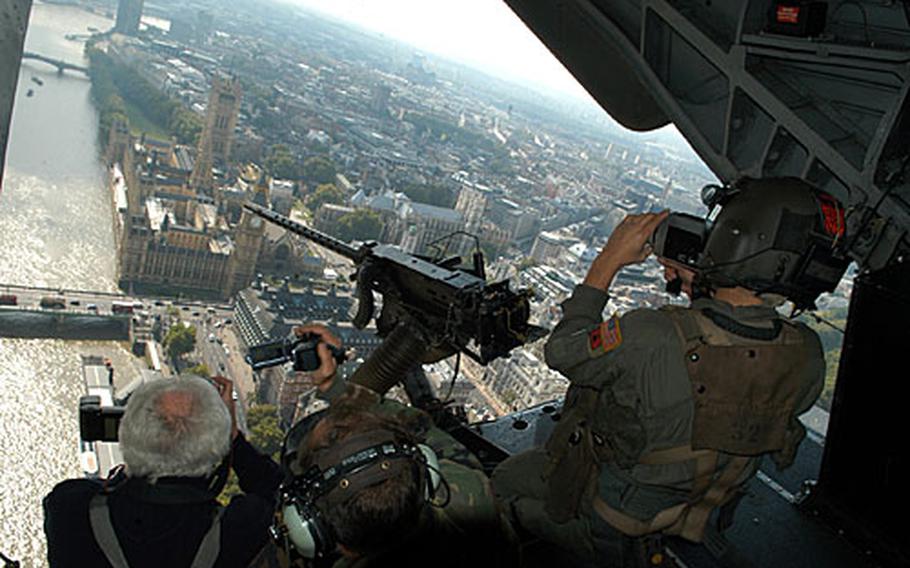 Passengers on a MH-53M Pave Low snap photos of the Parliament as it travels along the River Thames in central London. A formation of five Pave Lows hovered past many tourist attractions as part of its final flight. (Sean Kimmons / S&S)

RAF MILDENHALL &#8212; It was sort of a tourist helicopter ride, the type that hovers above popular attractions giving sightseers a bird&#8217;s-eye view.

Except this four-hour flight on Thursday came with bursts of gunfire.

To make it clear, the gunners were not shooting at tourist sites. That happened much later at a firing range in the North Sea.

But before reaching the range, a formation of five MH-53M Pave Low helicopters and their crews from the 21st Special Operations Squadron did some sightseeing &#8212; a perfect way to bid farewell to the aging helicopter and unit that will officially inactivate on Oct. 9.

The squadron&#8217;s fleet of Pave Lows, built for low-level, undetected flights into enemy territory, is scheduled to be transported to a disposal yard in Arizona by the end of the year. But before they are retired, the crew took them out on one final trip.

After taking off from RAF Mildenhall, the formation skimmed across the English countryside &#8212; at a height of only a couple hundred feet &#8212; passing airfields and farms with startled livestock. Then, the helicopters gained elevation to cross over the tranquil American Military Cemetery near Madingley and the outskirts of Cambridge before closing in on Duxford Airfield.

Then they picked up the River Thames and followed it all the way into central London. Photo opportunities for those riding in the copters and on the ground were aplenty as the formation made two sweeps over Tower Bridge.

Perhaps one of the highlights of the flight was when the helicopters descended over the English Channel and rode parallel to the cliffs of Dover. The rocky sea cliffs gave off a bright white glow against the channel&#8217;s azure water, making this part of the flight even more special.

An MC-130P Combat Shadow, assigned to the 67th Special Operations Squadron, then arrived to refuel the helicopters. The aircraft had a couple of refueling nozzles hanging from its rear, which made it possible to pump fuel to two Pave Lows at once.

Once filled up, the helicopters headed to the firing range in the North Sea.

In the lead helicopter, Staff Sgt. Jordan Ziroli, a Pave Low aerial gunner, loaded rounds into a .50 caliber machine gun planted on the rear ramp and lit up a smoke signal floating out in the sea.

At the same time, a pair of 7.62 mm mini guns attached to the sides of the Pave Low unloaded fire at similar targets in rapid succession, causing white-water explosions as the bullets peppered the water.

Ziroli is sentimental about the Pave Lows, which he has been working with for four years.

One of his most memorable times with the Pave Lows was in Iraq. He was in another five-ship formation, but unlike Thursday&#8217;s, the flight was in hostile terrain over Baghdad at night, he said.

Capt. Matt Richter has been flying Pave Lows for about five years and said it is bittersweet to see the helicopter go.

An Air Force spokesman said earlier this year that the chopper is being deactivated throughout the Air Force special operations force and is slated to be replaced by the CV-22 Osprey vertical-lift, fixed- wing aircraft in the next few years.

Senior Airman Patrick Soles, a Pave Low crew chief, is sad to see the copters go. He and fellow maintainers have put many hours into keeping them up and running.

When the squadron inactivates in October, it will go into a holding status until the Special Operations Command stands it up again, possibly for the Osprey, squadron commander Lt. Col. Kirk Smith said.