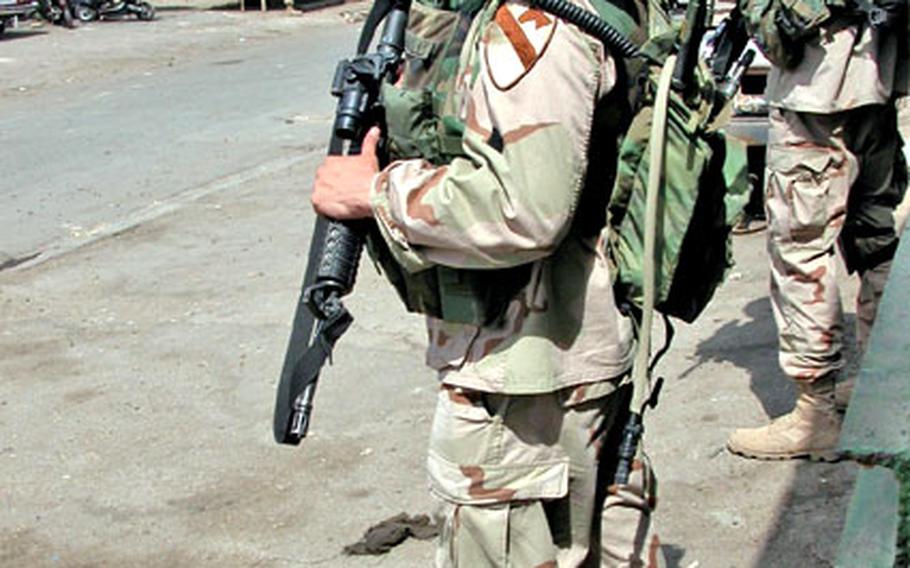 Cpl. Alan Gonzales, a 21-year-old from El Paso, Texas, and medic for Company C’s 3rd Platoon, scans for danger Sunday in a Bradley fighting vehicle while waiting for casualties at an evacuation point near Tallil Square in Baghdad. (Lisa Burgess / S&S) Soldiers from Company C, 1st Battalion, 9th Cavalry Regiment are either on the move during Sunday’s foot patrol mission in the Haifa Street area of Baghdad, or they are taking temporary shelter and waiting to make the next move. (Lisa Burgess / S&S) 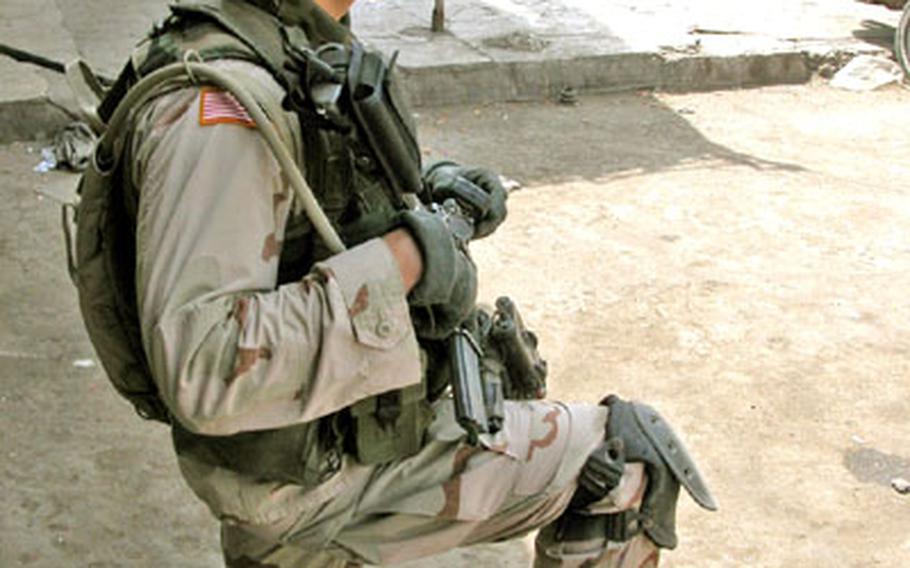 Capt. Chris Ford, commander of Company C, 1st Battalion, 9th Cavalry Regiment, pauses Sunday as he leads a foot patrol through the Sheik Marouf neighborhood of Haifa Street in Baghdad. The patrol came under attack, but no one was hurt. (Lisa Burgess / S&S) Capt. Chris Ford, commander of Company C, 1st Battalion, 9th Cavalry Regiment, tries to discern the direction of a volley of gunfire as he prepares to lead a foot patrol Sunday on Haifa Street in Baghdad. (Lisa Burgess / S&S)

BAGHDAD &#8212; Until last week, the world knew little about Haifa Street. Then came the spectacular car bombs in front of the Iraqi police station, and suddenly, Haifa was Iraq&#8217;s newest war zone.

But to the soldiers of the 1st Battalion, 9th Cavalry Regiment, who must patrol the sector that includes Haifa Street, that area has been an all-out war zone for months.

More than half the company&#8217;s soldiers have qualified for Purple Hearts, and Thomas knows personally just how &#8220;getting hit&#8221; feels.

He was on a mission just two weeks ago, which ended in an hours-long firefight, with six of the platoon&#8217;s soldiers, including Thomas, wounded by grenades. Thomas took shrapnel in the neck and a leg.

A Haifa mission on Sunday afternoon was shorter and less lethal, but not without incident.

Company C was originally directed to conduct a dismounted patrol that would begin in Tallil Square (&#8220;one of the more dangerous areas&#8221; in the Haifa sector, Ford said) and end a mile or so away, at the police station where a bomb went off last week.

Just as the convoy was leaving Forward Operating Base Headhunter, Ford got a call to stop everything, unload the troops, and return to the Tactical Operations Center for new instructions.

Off the convoy went, with most of the Bradleys heading for Tallil Square.

All went well for about a minute, until the hatch dropped on the fighting vehicles. The troopers dashed out. They established a perimeter, and then began to move down an alley.

In addition to &#8220;direct fire, grenade attacks and all types of harassing (fire) ... we were taking well-aimed shots from well-trained individuals,&#8221; he said.

Yet this time, Company C was lucky: No one was hurt.

And the 1-9 Cav has had three soldiers killed in action since arriving in March, said Maj. Chris DeGaray, the 1-9&#8217;s executive officer.

Located in central Baghdad, just a few miles from the tightly controlled and patrolled International Zone where U.S. Embassy and other coalition personnel live and work, Haifa Street and its surroundings are a mix: Sunni and Shia Muslims living and working together.Like many places in Iraq, Haifa Street acts as a dividing line between the &#8220;haves&#8221; and the &#8220;have nots.&#8221; On one side are the British Embassy, a revered Islamic cemetery and nice homes.

On the other: poverty.

The stench of garbage and untreated sewage permeates the street. Piles of trash are everywhere. Houses and apartments on the poor part of Haifa Street are crumbling, some from the effects of last year&#8217;s war, but most from neglect.

&#8220;There are winding alleys all over, no rhyme or reason to the streets, and no clear shots&#8221; for anyone trying to fight back &#8212; especially with a population of more than 100,000 civilians crammed into the same area.

The part of Haifa Street where Sunday&#8217;s fighting took place has always been poor and problematic, according to local Iraqis and 1-9 Cav members.

&#8220;These are the same people Saddam had problems with, but he used much more brutal tactics than we can to control them,&#8221; said Capt. Reggie Kornegay, a civil affairs officer with the 478th Civil Affairs Battalion but who is attached to the 1st Battalion, 9th Cavalry Regiment.

Nevertheless, since the end of the war, it wasn&#8217;t that bad for coalition troops patrolling Haifa Street, said soldiers from the 1-9 Cav.

&#8220;When we first got here, we walked around giving candy to kids and talking to people,&#8221; said 2nd Lt. Rick Caldwell, a Company C platoon leader.

But two months later, the situation started to change.

Then, in early May, Kornegay &#8212; whom DeGaray praised for his special ability to relate to local Iraqis &#8212; and his small team were attacked on the corner of Haifa and a place known simply as Street #17.

As the summer wore on, the situation worsened.

But even as patrols continue to turn into firefights, DeGaray said he has faith the situation will turn around, especially as the Iraqi Security Forces improve its abilities.