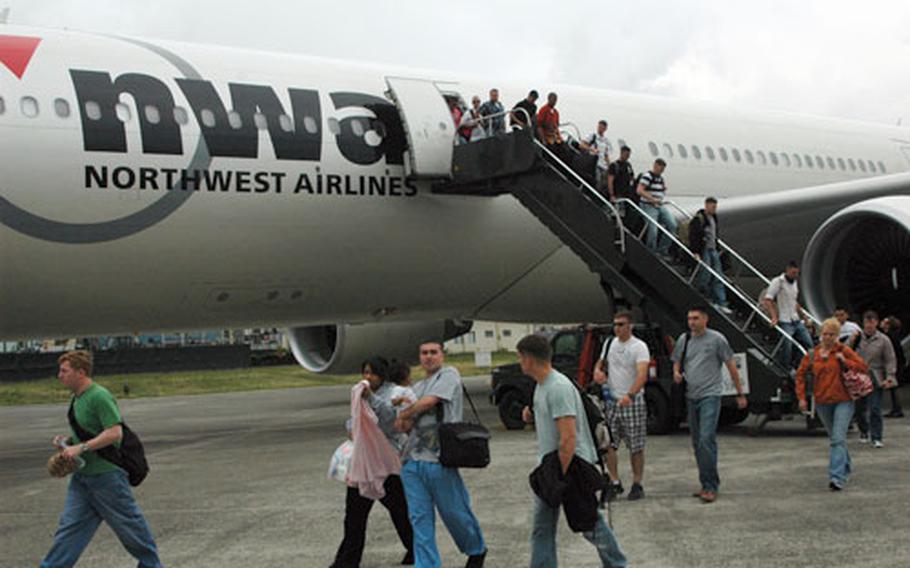 Passengers disembark from a Northwest Airlines Airbus A330-300 passenger plane to Yokota Air Base&#39;s passenger terminal. The plane&#39;s arrival marked the return of the Patriot Express to the Pacific. It was the first run of the Patriot Express by Northwest, which replaced ATA Airlines after ATA declared bankruptcy and ceased operations April 3. (Bryce S. Dubee / S&S)

YOKOTA AIR BASE, Japan &#8212; Taxiing past C-130 cargo planes and other military aircraft, a Northwest Airlines Airbus A330-300 passenger plane arrived at Yokota&#8217;s passenger terminal Thursday, marking the return of the Patriot Express to Japan.

It was the first run of the Patriot Express by Northwest, which replaced ATA Airlines after ATA declared bankruptcy and ceased operations April 3.

Patriot Express flights resumed quickly due to a combination of fast action by the Air Mobility Command, other organizations and a little bit of luck, said Capt. Paul Arkwell, officer in charge of passenger and fleet services for the Yokota&#8217;s 730th Air Mobility Squadron.

FedEx, the company contracted to operate the Patriot Express and subcontract flights, developed a temporary solution &#8212; buying tickets for commercial flights out of Narita International Airport to keep people from being stranded at Yokota while a new carrier could be found, Arkwell said.

&#8220;A lot of pieces fell into place very quickly,&#8221; he said, explaining that Northwest partnered with FedEx to fly the Patriot Express mission using a spare plane based at Narita.

Under the new arrangement, the Patriot Express will depart from Kadena Air Base on Thursdays and arrive at Yokota in the afternoon. At Yokota, the airliner will stop for about two hours to refuel and load passengers and cargo before departing for Seattle.

Because of the difference in time zones, the Patriot Express will arrive in Seattle still on Thursday, where it will pick up new passengers and crew before returning to Yokota and Kadena, arriving Friday.

&#8220;Northwest should have the contract through the rest of the fiscal year,&#8221; Arkwell said.

There were minor challenges in preparing for the arrival of the Airbus A330-300, such as adjusting how luggage is loaded and learning some different maintenance procedures. But everything was worked out by the time Thursday&#8217;s flight arrived, Arkwell said.

&#8220;The only thing the customers should notice is the flights are on different days now and that the plane says Northwest on it,&#8221; he said.

Arriving at Yokota from Okinawa on Thursday, Staff Sgt. Angelo Bryant said Northwest&#8217;s Patriot Express was problem-free and things ran &#8220;really smooth&#8221; even though he had four small children in tow.