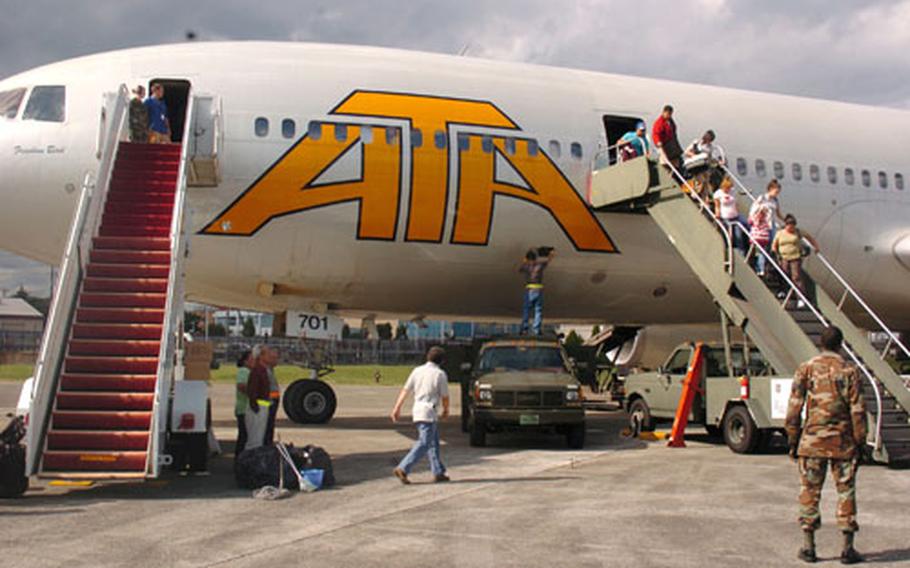 YOKOTA AIR BASE, Japan &#8212; The Patriot Express has been grounded following last week&#8217;s bankruptcy filing by its commercial carrier.

ATA Airlines shut down operations last Thursday due to the unexpected loss of a military transport subcontract overseen by FedEx Corp. Once the nation&#8217;s 10th-largest air carrier, it entered bankruptcy for the second time in just over three years.

The U.S. military&#8217;s only chartered commercial air service in the Pacific normally passes through Yokota every Friday and Saturday on weekly roundtrip flights from Seattle to Kadena Air Base, Okinawa. Last weekend&#8217;s flight was the first to be canceled.

With the carrier switch, he added, the Patriot Express flight schedule also may change.

Other AMC flights will continue as normal on military aircraft, officials said. Passengers should check with terminal representatives or automated recordings for the latest flight information.

In a statement, ATA said the cancellation of a critical agreement with FedEx for most of the airline&#8217;s charter business left it unable to offset soaring fuel prices. That arrangement gave ATA a significant share of the airlift contracts to fly military members and their families overseas.

The Patriot Express was upgraded last September with a DC-10 aircraft, which features 310 seats and had replaced the smaller L-1011.

The duty-passenger count &#8212; those on permanent change of station or temporary-duty orders &#8212; is crucial to making the flight &#8220;revenue-neutral&#8221; for U.S. Transportation Command. It&#8217;s also a necessary stipulation in preserving a huge space-available travel benefit for the military community. The only charge for space-A fliers headed to the United States is a $27.10 transportation fee, or international &#8220;head tax.&#8221;

Stars and Stripes reporter Bryce S. Dubee and The Associated Press contributed to this story.