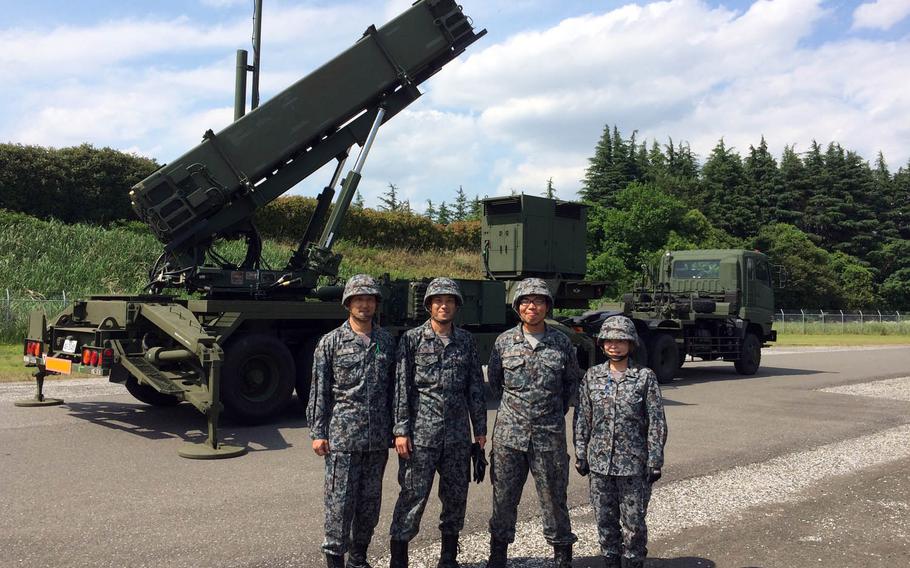 Buy Photo
Members of Japan's 1st Air Defense Missile Group pose with a PAC3 launcher at Iruma Air Base on the outskirts of Tokyo, Friday, June 9, 2017. (Seth Robson/Stars and Stripes)

Buy Photo
Members of Japan's 1st Air Defense Missile Group pose with a PAC3 launcher at Iruma Air Base on the outskirts of Tokyo, Friday, June 9, 2017. (Seth Robson/Stars and Stripes) 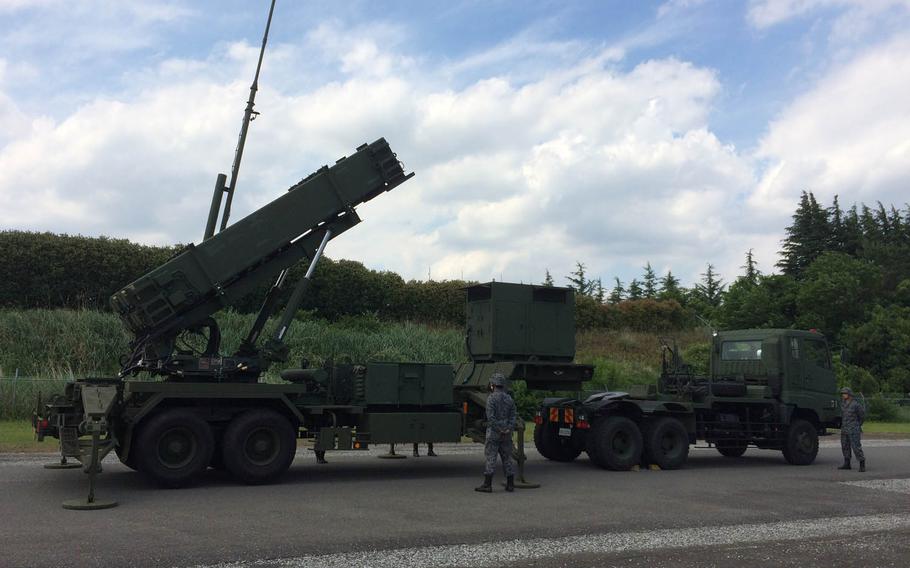 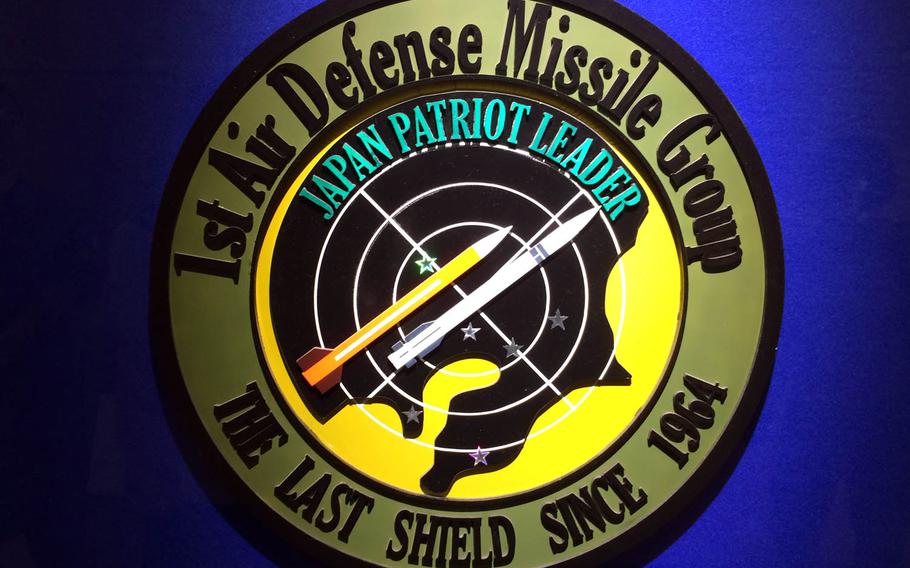 IRUMA AIR BASE, Japan — Japanese airmen’s boots thudded on asphalt and electric motors hummed as a PAC3 missile launcher aimed into the blue sky over Tokyo.

The launcher, part of a U.S.-made Patriot missile-defense system at Iruma, a Japan Air Self-Defense Force base on the city’s outskirts, is one of many that protect about 36 million people — including tens of thousands of American personnel and their families — living in and around the Japanese capital.

On Thursday, the JASDF is scheduled to conduct drills for deploying its PAC3 interceptors at four bases in Tokyo in response to recent North Korean missile tests, Japanese broadcaster NHK reported.

Yokoyama has worked in air defense for 26 years and has drilled for a decade to shoot down incoming missiles with the PAC3. If his crew gets word that an enemy missile has been launched, they won’t have long to get ready, he said. To set up the system, airmen detach its trailer from a truck and lower a set of stabilizing legs before electric motors crank the launcher skyward and swivel it to face its target. Airmen shout commands as they run around the vehicle flicking switches and making sure the system is working.

“It’s mentally and physically challenging,” said Yokoyama, whose crew is the fastest in the battalion.

The Iruma launch crew is part of the 1st Air Defense Missile Group, which has about 600 airmen and an undisclosed number of launchers in the prefectures that surround Tokyo — Saitama, Chiba, Ibaraki and Kanagawa.

“The mission of the group is to protect the metropolitan area airspace, and it is appropriate to spread out our personnel to be able to efficiently defend it from being attacked from various directions,” said the group’s commander, Col. Akira Ito, 51.

The missile-defense troops can’t let their guard down, no matter how many North Korean launches turn out to be tests, he said.

Most of the missile-defense troops’ training involves only Japanese forces but they’ve traveled to Yokota to work with the Americans, he said. “A ballistic missile launch by North Korea is not something that can be responded to just by Japan alone,” he said. “It has to be done in coordination with the U.S. military, and I believe that cooperation [between Japan and the U.S.] has increased with Japan-U.S. joint trainings.”

Families of American personnel sent to the Far East should feel confident that the Japanese military is doing all it can to protect them, he said.

“Please believe in us and feel safe,” he said.

American Global Hawk surveillance planes launched from Yokota have long-range sensors that can capture images of North Korean forces on the other side of the Demilitarized Zone.

However, Ito said it has recently become harder to detect preparations for a missile launch and determine whether it’s a test or an attack. It would take only a short time for a North Korean missile to reach Tokyo, he warned.

“Whether it is a test or an attack, we must be prepared,” Ito said.

“We are the last line of defense,” he said. Reports suggest that the North Koreans have “leveled up” their missile technology with improved engines, he said.

“We need to think about ways to take measures against that,” Ito said.

The Japanese government is looking to boost its defenses with the Terminal High Altitude Area Defense, or THAAD, or the Aegis Ashore missile-defense systems, Reuters reported last month.

In the meantime, Ito said, the missile-defense troops are training as much as possible with the systems they have.

Protecting Tokyo from devices designed to inflict the sort of damage experienced by Hiroshima and Nagasaki is a heavy burden.

However, every member of the 1st Group is proud of their job, Ito said.

“I never wish for a nuclear missile to be launched, but if it is launched then we have to shoot it down, otherwise it would cause a great disaster,” he said. “We can’t fail.”