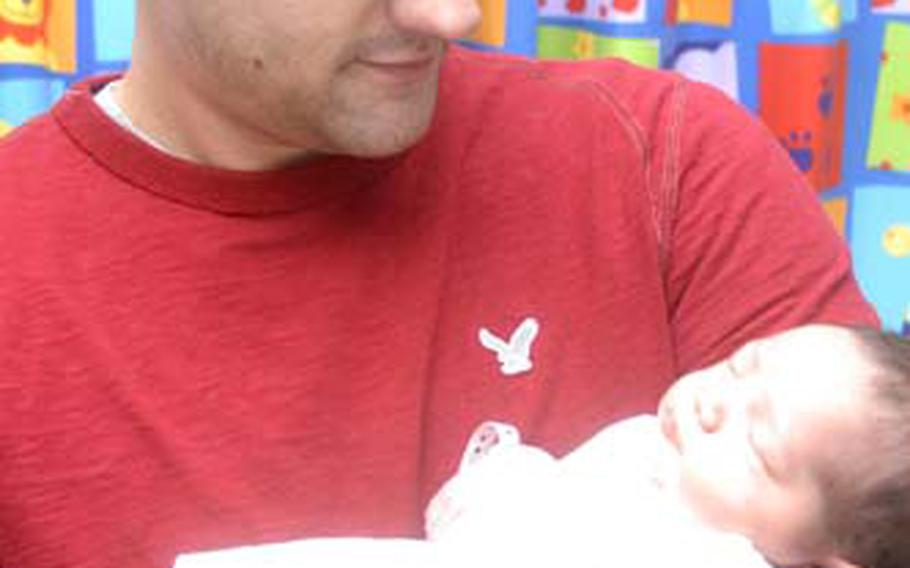 Being a proud new papa has its perks, and now dads in uniform have another reason to smile &#8212; paternity leave.

Last month, a new paternity leave policy, giving military dads 10 days off for the birth of their child, went into effect with the passage of the Defense Authorization Act. The Defense Department is leaving it up to each service branch to determine how to handle the new policy.

"There certainly was support from all of the services, and Congress just started at the same time being interested in the same subject," said Stephanie Miller, director of the Women&#8217;s Policy and Task Force Life/Work with the Navy.

"It really joins us in the ranks with the corporate America folks (who get paternity leave)," Miller said. "This is another benefit to add to that package that allows us to compete with companies. One of the reasons we support it is it should help retain sailors."

So far, only the Navy and Marine Corps have developed a plan for new dads. The Army and Air Force policies are still being developed, spokesmen for those services said this week.

In all, the policy could affect some 100,000 military families a year.

Tricare officials said they could not project how many births there would be in 2009 because there are too many factors involved. For instance, the number of births tends to increase nine months after servicemembers return home from deployments, said Chuck Roberts, a spokesman at Landstuhl Regional Medical Center in Germany.

After having two kids without being able to take paternity leave, he is looking forward to the added benefit when his wife, Petty Officer 1st Class Monico Lujan, gives birth to their next child. They have an 8-year-old daughter and a 3-year-old son, and they are expecting their third child in a few weeks.

"Every little bit helps. It is kind of cool that the Navy is pursuing this," Luis Lujan said. "I didn&#8217;t know that 13 percent of U.S. employers pay for paternity leave. That was kind of a shocker."

Lujan, a yeoman, works for the chief of naval policy, so he had an idea that paternity leave would be a reality before other sailors got wind of the new benefit.

"With both of my kids, my wife had a (Caesarean section). It is considered major surgery, so she was not very mobile. It helps that I don&#8217;t have to dip into my earned leave (for the next child)," he said.

Just because junior has left the womb, however, does not give a sailor a pass home from a deployment, Miller said. But the Navy&#8217;s policy allows a sailor to start taking the leave up to a year after the child is born.

Whether the leave is granted in the Navy is also up to the discretion of the sailor&#8217;s commanding officer, Miller added.

About 18,000 babies are born to Navy families each year.