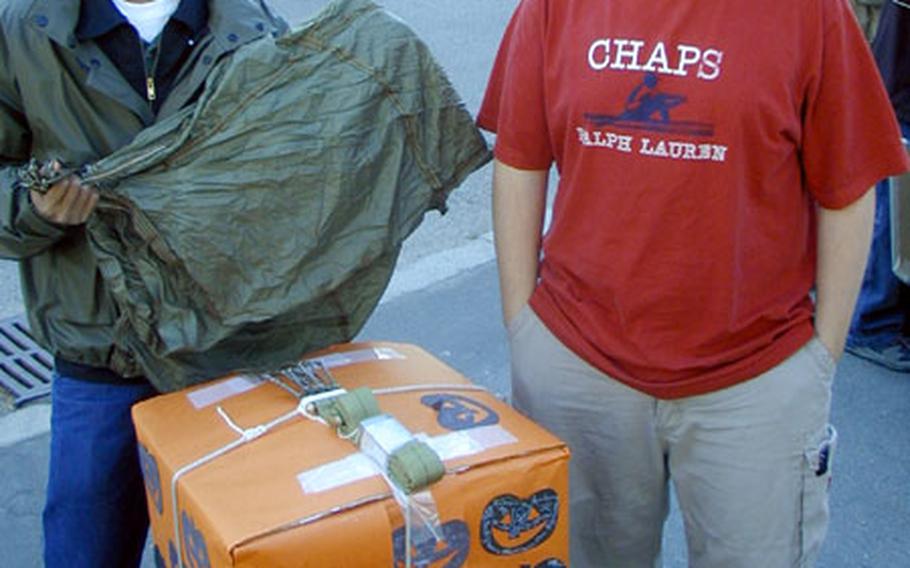 Marcelo "Casper" Harper, left, and Brandan Reed, Patch High School juniors, wait for their turn in the 1st annual Great American Pumpkin Patch Drop. The pumpkin drop container made by the duo was one of only three of 15 that did not damage their pumpkins after being dropped from a 70-foot tall fire engine ladder. (David Josar / S&S)

Marcelo "Casper" Harper, left, and Brandan Reed, Patch High School juniors, wait for their turn in the 1st annual Great American Pumpkin Patch Drop. The pumpkin drop container made by the duo was one of only three of 15 that did not damage their pumpkins after being dropped from a 70-foot tall fire engine ladder. (David Josar / S&S) 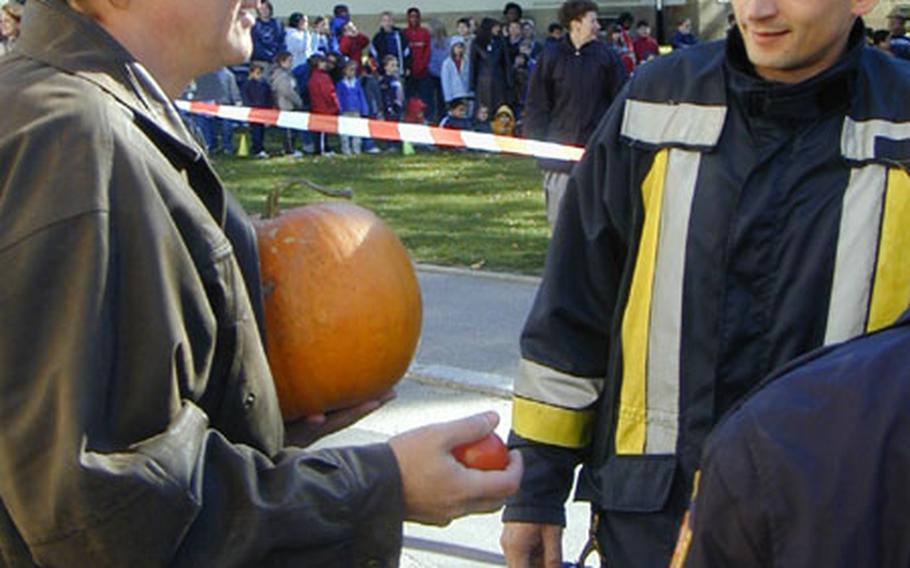 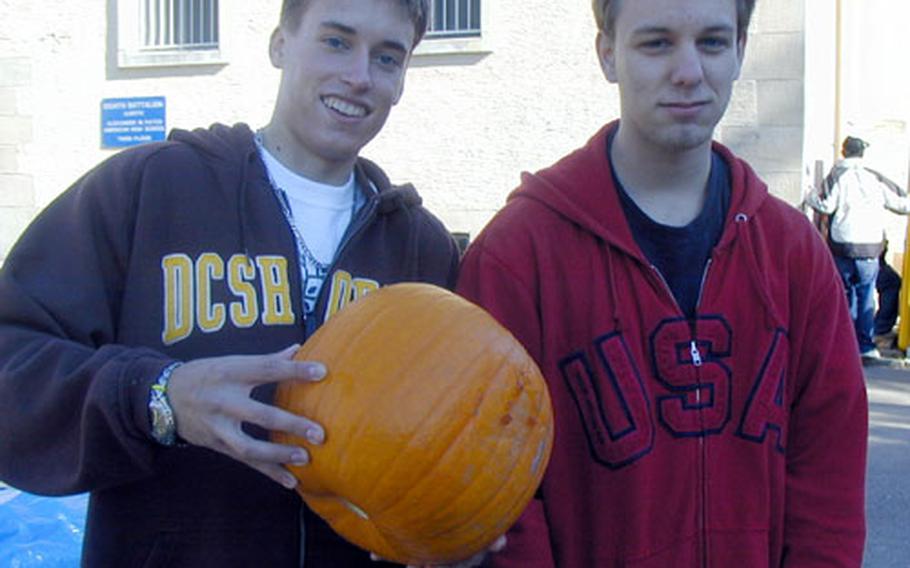 High school physics students participating in the 1st Annual Great American Pumpkin Patch Drop paired up with elementary school classes to design their pumpkin drop containers. Seniors Taylor Armstrong and Ryan Sharp used the suggestion of the elementary school students and packed their pumpkin in 25 pounds of Jello. They were one of only three of 15 pumpkins that survived the plummet from a 70-foot fire engine ladder. (David Josar / S&S)

With that sound, Patch High School seniors Alex Riccio and Sarah Taylor knew they would not be winning the first Great American Pumpkin Patch Drop.

Their pumpkin &#8212; suspended by bungee cords inside a plastic, green trash can &#8212; cracked and the container shattered on impact.

The pumpkin was one of 15 dropped Wednesday from about 70 feet from the end of a German firetruck ladder that had pulled up next to the high school. Three survived the fall.

Brandon Reed and Marcelo &#8220;Casper&#8221; Harper based their design on a cone-shaped cardboard nose cone and a small military-issued parachute they borrowed from a friend, and took first place ahead of runners-up Apryl Armstrong and Anthony Kirkpatrick.

Third-place finishers Taylor Armstrong and Ryan Sharp tried something different: They spent the night before the contest whipping up 25 pounds of cherry and grape Jell-O, which they used to cushion their pumpkin.

Through the project, the high school physics students learned to problem-solve and how to apply ideas to a project, said Patch High School physics and chemistry teacher Brad Rehwaldt, who orchestrated the pumpkin drop. They also teamed up with elementary classes to brainstorm and to help with design.

Rehwaldt said one goal of the project was to have students learn that they had to test different ideas to see what would work.

The students spent about a month on their projects.

Rehwaldt, who has taught at Patch for 23 years, said he got the idea for the project in a note from a former teacher.

Winners were selected from among containers that allowed the pumpkins to survive the fall, based on which were the lightest and judged to be the most original.

Each two-person team of high school students was assigned a class at the adjacent Patch Elementary School. The teenagers met with the younger students and incorporated some of their ideas into the pumpkin drop.

Armstrong and Sharp thought the idea to use Jell-O presented by their elementary students was a little strange, but decided to give it a try.

&#8220;It sounded different,&#8221; Taylor Armstrong said. On Tuesday night, Sharp mixed together 10 boxes of Jell-O in his kitchen.

Like all the 14 other teams, Armstrong and Sharp first constructed a mock-up of their Jell-O-based design and dropped an egg instead of pumpkin.

Their design relied on two cardboard boxes. Inside a smaller box was the pumpkin in a bag filled with 25 pounds of Jell-O. The smaller box, surrounded by bungee cords, was inside the larger box.

Hundreds of elementary students gathered along the closed-off road leading to the high school as a Stuttgart fire department truck raised and lowered its ladder.

In just under an hour, the 15 pumpkin containers &#8212; from the size of a television to a full-size garbage can were tossed by a firefighter from the top of the ladder. Each drop was met with shrieks of delight from the onlookers.