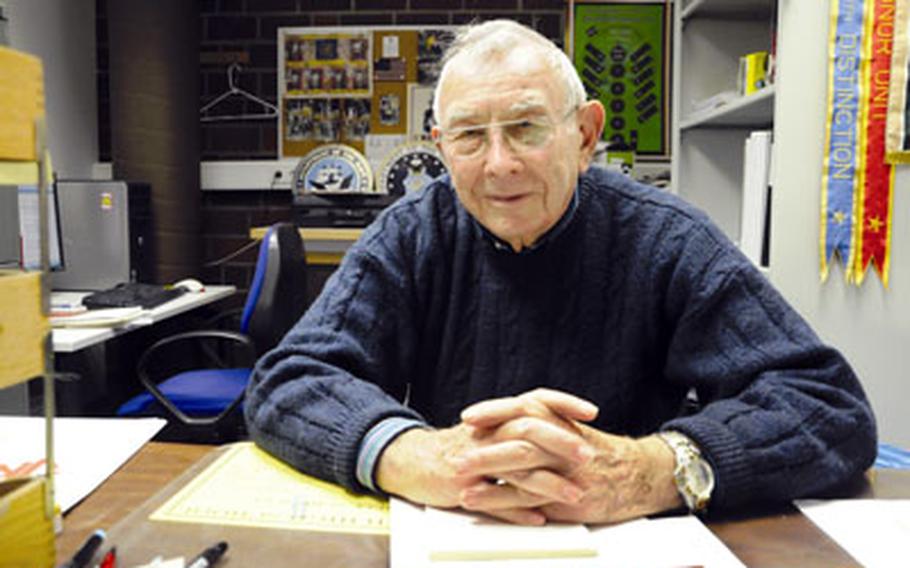 Retired Army Chief Warrant Officer 4 Jack Goldman sits in his office at Patch High School, recalling stories from his 65-year career with the federal government during his last day of work on Friday. (Warren Peace/Stars and Stripes)

During a 34-year Army career, he worked all over the world, serving in post-war Europe and Vietnam, South America and the United States.

For the last 31 years, Goldman has walked the corridors of Patch High School, bringing tough love and discipline to countless youngsters who have passed through the Junior ROTC program that the now 83-year-old founded in 1979.

Goldman&#8217;s 65-year career journey with the federal government came to an end last week when he retired.

His impact on students can be measured by those who come back to visit him.

"When they come back to see you, that&#8217;s where you derive the most pleasure," Goldman said.

One of those students, Navy Lt. Bernie Dobner, credits Goldman with pointing him to a military career.

"When I was in school, he was the grumpy old man. ... Since I have grown up, I see him differently and see what he was doing for us," said Dobner, who serves in Stuttgart.

During his time at Patch, Goldman has established many extracurricular activities for cadets.

One of the most popular is the barbecue his cadets hold on a nearly daily basis during lunch time at school. The proceeds fund field trips and help support charities, such as a Romanian children&#8217;s home.

Goldman seemed proudest of the cadets&#8217; annual pilgrimage to Lorraine American Cemetery and Memorial near St. Avold, France, a tradition that began in the early days of the Patch JROTC.

Goldman has influenced many young cadets who went on to have successful military careers. Some have even retired before him.

One former Patch High School student is commander of the 2nd JROTC Brigade, which Goldman&#8217;s battalion falls under. Army Col. Glenn Goldman, his son, recently took command of the brigade and became his father&#8217;s boss.