Patch fifth-grader on her way to national spelling bee 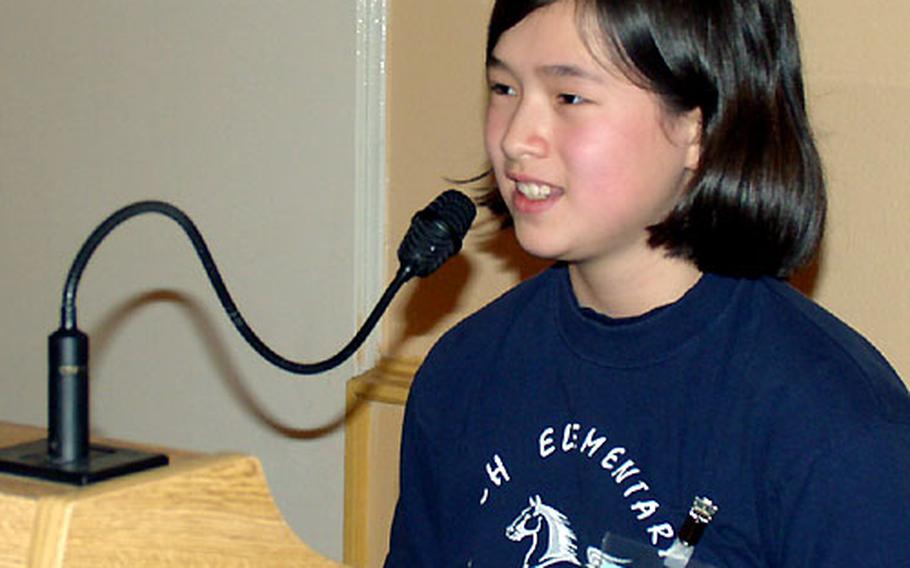 STUTTGART, Germany &#8212; The mystery behind Dawn Anderson&#8217;s outsmarting of 39 other American top spellers during the Europewide spelling bee competition Saturday is elementary, my dear.

Reading an array of sleuth novels, hours of study time on the Internet and being grilled by her parents led the Patch Elementary School fifth-grader to confidently know every word given during the bee, held at Swabian Special Events Center on Patch Barracks in Stuttgart. That is with the exception of two.

Dawn will represent Europe in the 76th annual Scripps Howard Spelling Bee in Washington, D.C., on May 25-30. She will be accompanied by her father, Air Force Maj. Christopher Anderson.

Last year, Dawn competed against top Department of Defense Dependents Schools spellers up to age 15 and came in fourth. This year she knew she had the edge in the Europewide spelling bee because of her past experience.

The avid Sherlock Holmes fan said she hardly changed her study style from the previous year. She went in knowing it doesn&#8217;t take luck. It takes brains.

&#8220;I only played a little and spent most of my time studying words,&#8221; the soccer and baseball enthusiast said.

Among her challengers were two seventh-graders who held their ground during the nail-bitingly tense 10th and 11th rounds: John Frank, 13, of Kaiserslautern Middle School, who was runner-up, and Terron Browne, 13, of Mannheim Middle School, who finished third.

The majority of the others were eliminated just prior to the lunch break leaving only six to compete during the final word bouts.

She said she helped her daughter as much as possible, but with her accent sometimes found it difficult because English is her second language.

Dawn, who has also played the piano for seven years, knows some Korean, as well, but has not picked up much German in the two years she has lived in Stuttgart.

Right now, she said, it&#8217;s more important for her to concentrate on spelling the English language.

After the competition, Dawn celebrated with her friends and family with pizza &#8212; perfect brain food for a 10-year-old wordsmith.

(Stars and Stripes and the European Congress of American Parents, Teachers and Students annually sponsor the European competition. ECAPTS will sponsor Dawn and her father in the D.C. competition.)