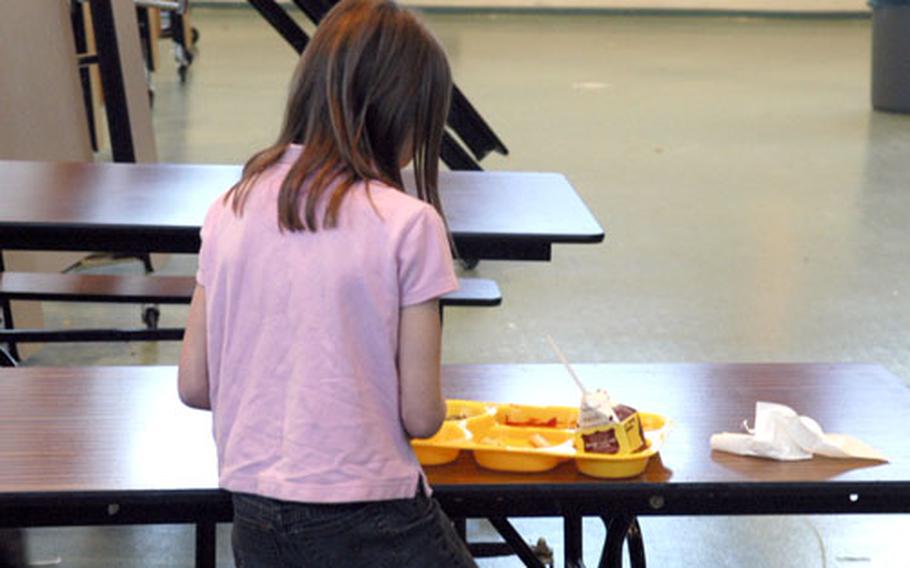 One of the last students to receive her lunch finishes up at Patch Elementary School on Thursday. Principal Robert Allen said he wants to change the current lunch schedule so students won’t be late for class. Some students don’t receive their meals until there is less than 10 minutes left in their 30-minute lunch break. (Geoff Ziezulewicz / S&S)

STUTTGART, Germany &#8212; The flood starts gradually, but then the dam breaks. And a few minutes after 11:50 a.m. in the Patch Elementary School lunchroom, controlled chaos is in effect. More than 250 bouncing and giggly elementary children either eat or wait to be fed. This happens twice each day, with each group having about a half hour to get their food and eat.

But getting that food takes some time. The massive wave means some don&#8217;t get their lunch until less than 10 minutes before class resumes. As it nears 12:50 p.m. and the beginning of the afternoon, some kids are just getting to their seats with their trays.

Parents, teachers and administration all agree that this is a problem. Some kids are going right from recess to lunch without washing up, and other kids are waiting forever and not having time to eat properly.

But that&#8217;s where the agreement ends. Since the school year started, a community controversy has arisen about the best way to fix the lunchroom problem. It couldn&#8217;t be solved at the ground level, and now the teachers union and the district Department of Defense Dependents Schools superintendent are involved. And animosity seems to be bubbling up between the two sides.

At the heart of the matter is a new lunch schedule proposed this year by Principal Robert Allen, who is in his first year at the school. The plan would involve sending groups of kids into the lunchroom in 10-minute intervals, instead of two big 260-student chunks. Allen said Thursday that this would cut down on the wait and all kids would go to recess after eating. Currently, half the kids go out before they eat and half go after.

Students would be encouraged to eat and leave the cafeteria quickly because otherwise they&#8217;d shorten their own recess, Allen said. &#8220;That&#8217;s a powerful carrot,&#8221; he said.

But the plan would involve shaving 15 minutes off of the faculty&#8217;s designated lunch hour. Some teachers this week said they need the extra time to prepare extracurricular activities and do other planning. Faculty are guaranteed at least 30 minutes for lunch, but times vary by school, DODDS officials said.

Duanna Petrus, the Federal Education Association &#8212; or teachers union &#8212; representative at Patch Elementary did not return queries for comment this week, and regional representative Roseann Drydale would not comment at all. Teachers said this week that the union needs to be involved in the issue because the proposal constitutes a change in work practices and conditions.

It is unclear when or how a compromise will be met regarding lunch, but Superintendent Mike Thompson said he was hoping to have a deal in place by the end of the calendar year. Some faculty said they thought it would have to wait until next school year.

Jacquelyn Nasca, the Parent Teacher Association president for the school, has been a vocal proponent of Allen&#8217;s lunch plan, and said she believes that the teacher&#8217;s union is at the heart of the problem.

Amid all the adult hubbub, the kids seem to go about their lunchtime routine with little problem.