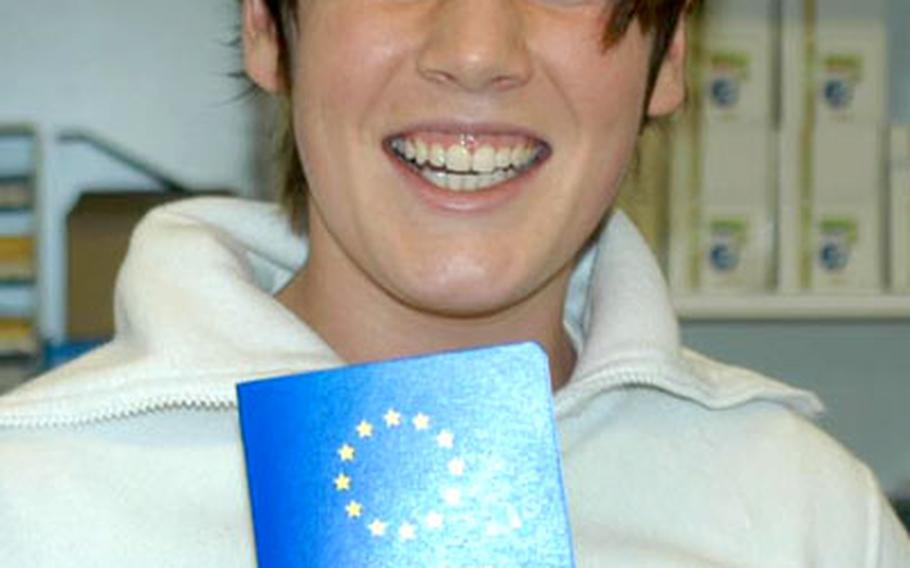 The new passports, which were launched throughout the EU this month, are issued only at off-post veterinary clinics.

The little blue booklet, which will be valid in all 25 EU member countries, costs about 12 euros, depending on the facility and if shots are up to date, according to Elizabeth Theis, a veterinarian assistant in Darmstadt. It must be renewed every other year and costs 5 euros to renew it.

Though the pet passport may look like a human passport on the outside, the inside is actually full of medical information necessary for travel.

Owners even have the option of adding their pet&#8217;s photo.

Theis said pets must either have a microchip implanted or a tattoo for identification, as well as have current rabies shots, before a passport is issued.

She said if the pet has these requirements, then owners need to pay only 3 euros for the passport and about 9 euros for a doctor consultation.

The mandatory microchip may halt American travelers, though, since the microchip used in the EU is different from those used in the States, according to Lt. Col. Thomas Hondel, deputy commander of the 100th Medical Detachment (Veterinarian Services) in Heidelberg.

Hondel explained that this difference in chips makes it impossible for the other country&#8217;s chip readers to view the information. Owners either have to get a European chip for the pet while in the EU or get it tattooed to get the new pet passport.

Though military facilities cannot give American pets a passport to travel, they can offer guidance, Hondel said.

He recommends only families who take their pets on vacation with them get the new passport.

Those who prefer to have someone else watch their pet while taking a holiday need not worry about the new passports.

Travelers should talk to their local veterinarian prior to making a trip outside of the EU with their pets, since more paperwork is needed than just the passport.