Passengers play waiting game for flights at Ramstein Air Base 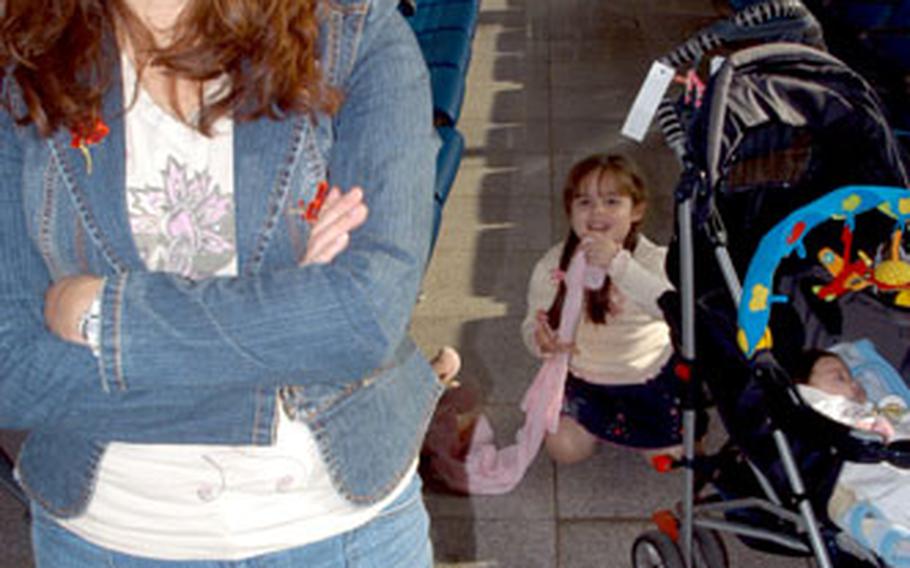 Spc. Jeff Brunelle of the Bamberg-based 630th Military Police Company watches television a movie at the theater at Ramstein Air Base’s passenger terminal as he waits for a space-available flight out of Germany. (Charlie Coon / S&S) 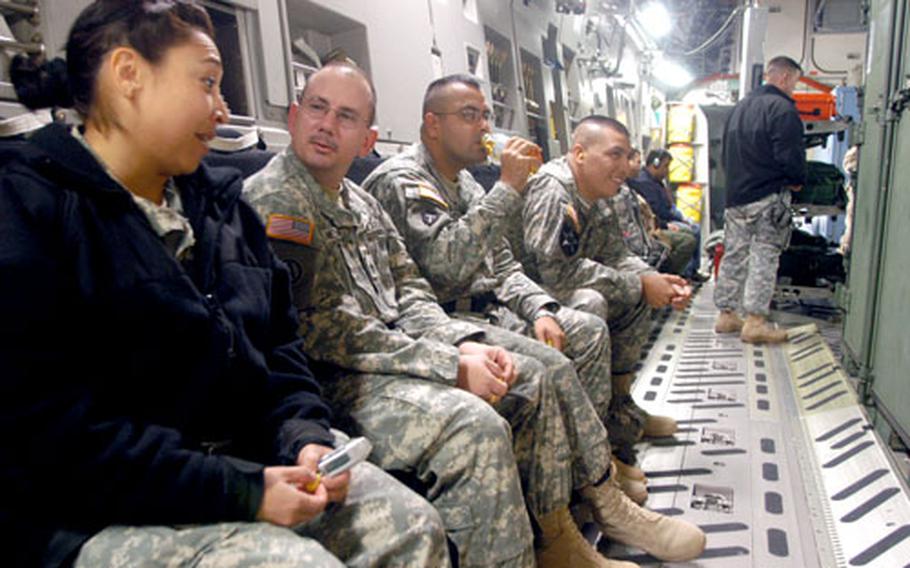 Servicemembers get ready to take off Friday on a C-17 space-available flight out of Ramstein Air Base, Germany. Some in the group had waited four days before getting a flight to Balad, Iraq. (Charlie Coon / S&S)

RAMSTEIN AIR BASE, Germany &#8212; Yanira Gonzales had a bad 24 hours. She was caught in space-A hell.

Gonzales was dropped off Thursday at Ramstein Air Base, a two-hour drive from her home base in Friedberg, Germany. She had her 4-year-old and 2-month-old daughters in tow, plus child car seats and luggage. Now, the trio was without a car, a flight or a place to stay.

Welcome to space-available flying. It&#8217;s been a crap shoot this week: Flights were delayed, changed or canceled. Seats available on given planes went from plenty to none on short notice.

As a result, the passenger terminal, or PAX, became a way station for people looking to get where they were going. There were troops, families and retirees trying to travel on the cheap. There were big, burly civilians with guns trying to get downrange. There were others heading to and fro at the expense of U.S. taxpayers.

Mostly, there were troops, on their way from one part of the world to another.

After her flight was canceled Thursday, Gonzales, wife of Spc. Jose Gonzales of the Friedberg-based 1st Battalion, 36th Infantry Regiment, had to lug her kids and her stuff back to the sidewalk in front of the terminal. Men in uniform watched, but did not help, she said.

She was trying to fly to Dover, Del., to visit family in Baltimore. Her husband was in Iraq on his second one-year-plus deployment with the 1st Armored Division.

Gonzales finally got her load onto a shuttle bus, which drove her to the hotel area on another part of Ramstein. But once she arrived there, she was unable to find a room for her and her children.

After she had waited in the lobby for hours, a man standing in line overheard her plight and offered his suite to the young family. &#8220;He felt sorry for us,&#8221; Gonzales said.

David Corrie&#8217;s job is to make airfield improvements at the massive airfield at Logistical Support Area Anaconda in Balad, Iraq. But that didn&#8217;t make it any easier for him to get to the airfield.

Gregory Nelson feels their pain. Nelson, who has worked at the terminal&#8217;s Subway shop for 18 months, noted that sometimes flights make it in and out of Ramstein like clockwork. Other times, however, they do not.

He recalled the woman who spent last Christmas at the terminal with her two small children.