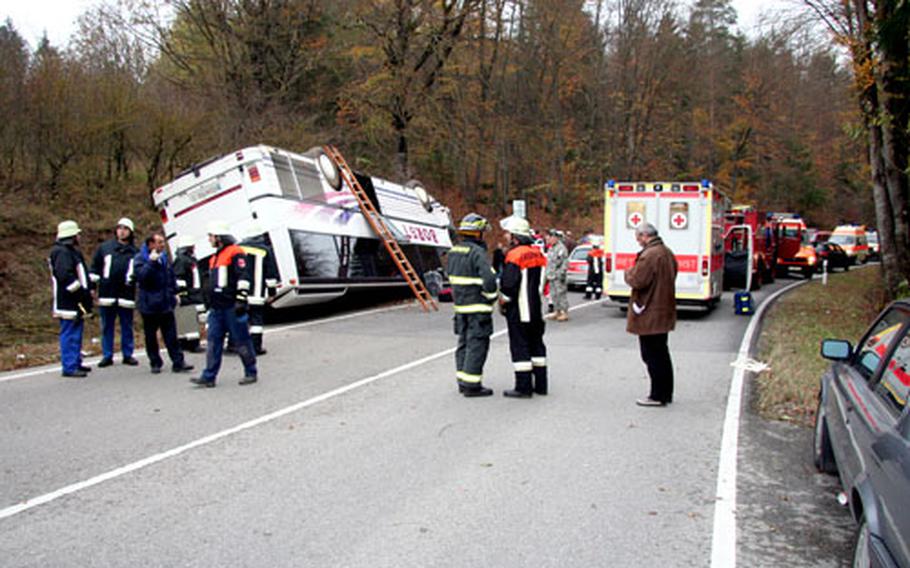 Emergency crews responded to an accident Monday afternoon near Gate 5 at the Joint Multinational Readiness Center in Hohenfels Germany. The driver of the bus was pronounced dead at the scene. (Norbert Wittl / U.S. Army)

GRAFENW&#214;HR, Germany &#8212; One moment Pvt. Nathan Jones was napping on the bus taking him on the last leg of a long journey to his new duty station in Vilseck. The next he was clinging to his seat in terror as the bus veered off the road and flipped onto its roof.

One person died and 11 people were injured when the 55-seat bus, carrying 14 soldiers and family members from Frankfurt International Airport to new duty stations in Bavaria, crashed near Hohenfels&#8217; Gate 5 on Monday.

The 19-year-old Colorado Springs native, on his way to a job with the American Forces Network Bavaria at Vilseck, said that after the driver lost consciousness, the bus traveled up an embankment beside the road, toppled over and rolled onto its roof.

A noncommissioned officer on the bus knocked out a window and escorted people to safety. Passers-by also stopped to help while passengers worked to free pets trapped in the luggage compartment before emergency services arrived, Jones said.

The driver appeared to have died from a heart attack, according to a German doctor who arrived later. Two minutes before the accident, he&#8217;d taken over the wheel from his wife, who was his co-driver, Jones said.

There were a lot of children on the bus, Jones added.

U.S. Army Garrison Hohenfels public affairs officer Gerry Arbios said none of the injuries was life-threatening, and all but one of the injured were released from the hospital by Tuesday.

Emergency personnel from the Army post and surrounding German communities treated multiple injuries, ranging from arm injuries to bleeding, Stoeckl said, adding that he had &#8220;never seen anything with so many injuries at one time.&#8221;

Joint Multinational Training Command spokesman Chuck Gordon said he had no information on the unit assignments of the other soldiers in the crash.