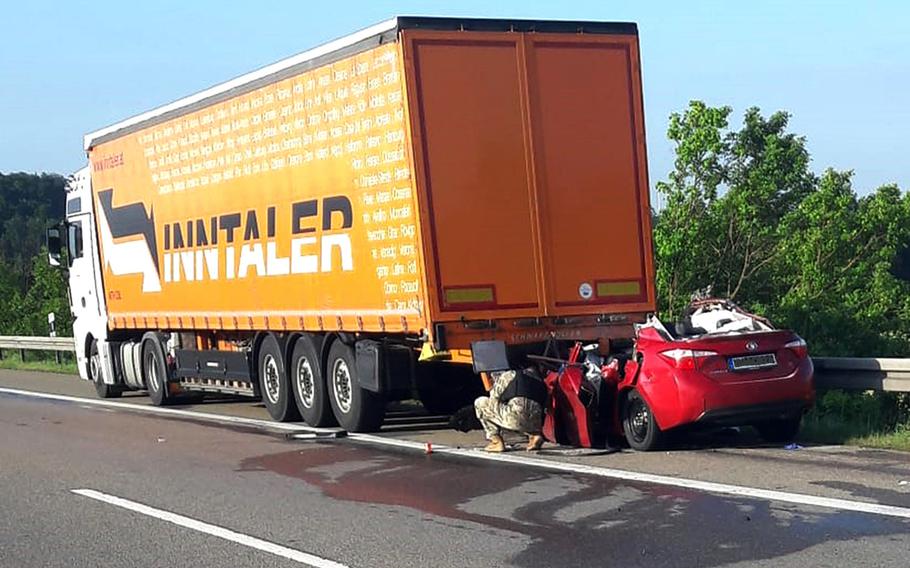 A U.S. soldier and a family member received life-threatening injuries Saturday in an accident on the A3 near Neumarkt-Ost and Velburg in Bavaria, Germany. (Velburg Fire Department)

GRAFENWOEHR, Germany — The family member of a U.S. soldier was pronounced dead Monday after a highway accident in Bavaria over the weekend in which the car driven by the soldier crashed into a truck, Army officials said Tuesday.

The soldier, 27, who is assigned to the 1st Battalion, 4th Infantry Regiment and stationed in Hohenfels, remains hospitalized after the Saturday morning accident near Neumarkt-Ost and Velburg.

The Army has not yet released the identity of the soldier.

An investigation by German and American authorities is underway to determine the cause of the accident, Army officials said.

The soldier and family member were in a Toyota Corolla traveling about 110 mph on a stretch of the German autobahn when they crashed into the back of a long truck, police said. The highway had no speed limit.

The truck dragged the car more than 200 yards before stopping on the side of the road.

The soldier and family member were cut out of the vehicle and taken by helicopter to hospitals in Erlangen and Regensburg.

The 40-year-old truck driver had a dashcam running when the accident occurred, which confirmed that the driver remained in his lane at the time, local police said.

Blood samples were taken to see if alcohol was consumed, but the results are not yet available, police said.