Parting shot: No fond farewell for 82nd paratroopers in Afghanistan 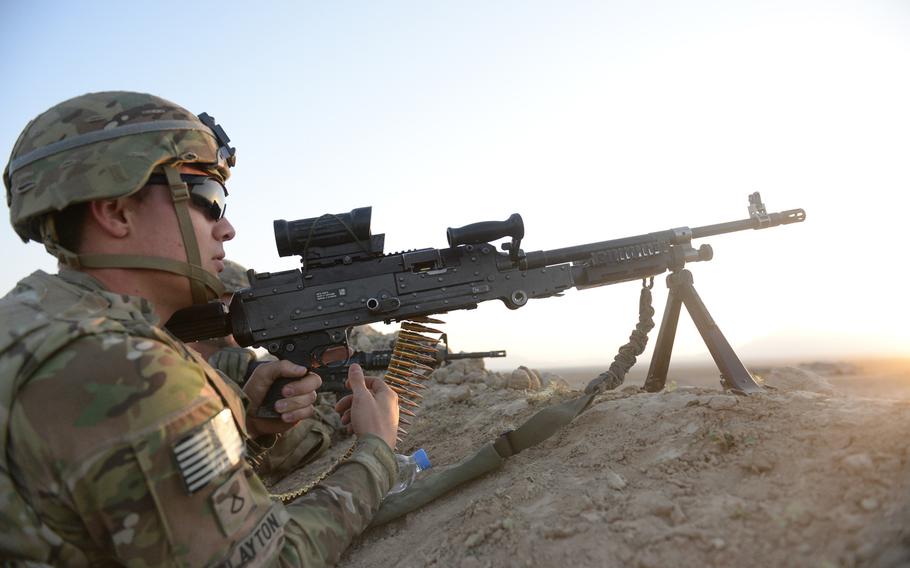 Spc. Derrick Slayton provides security during a Oct. 5, 2014, patrol outside Forward Operating Base Shank in eastern Afghanistan. Slayton and the other soldiers of Company C, 1st Battalion, 504th Parachute Infantry Regiment, are tasked with beefing up security around the FOB ahead of its pending closure. (Jad Sleiman/Stars and Stripes)

Spc. Derrick Slayton provides security during a Oct. 5, 2014, patrol outside Forward Operating Base Shank in eastern Afghanistan. Slayton and the other soldiers of Company C, 1st Battalion, 504th Parachute Infantry Regiment, are tasked with beefing up security around the FOB ahead of its pending closure. (Jad Sleiman/Stars and Stripes) 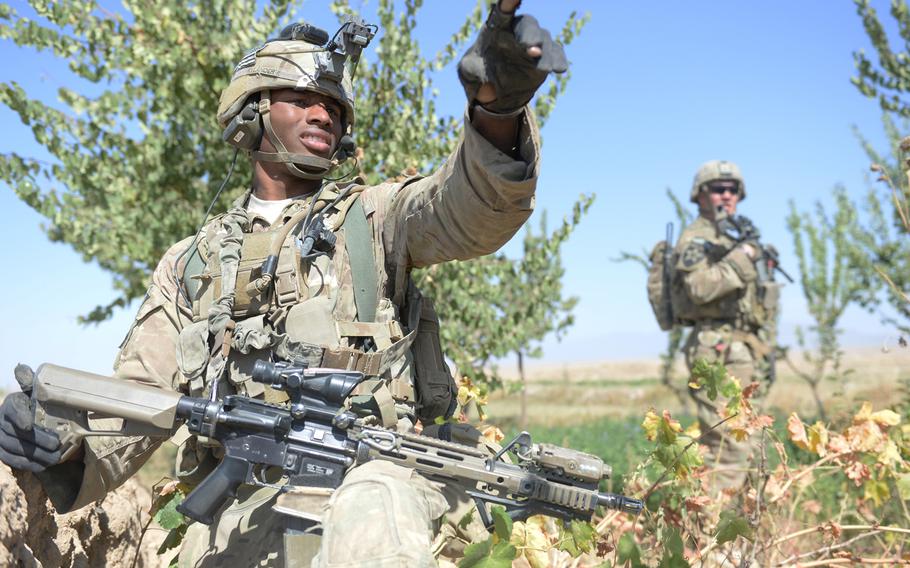 Spc. Cameron Rylander points to a gravel field from which rocket attacks against Forward Operating Base Shank were launched the previous night during a patrol, Oct. 5, 2014. (Jad Sleiman/Stars and Stripes) 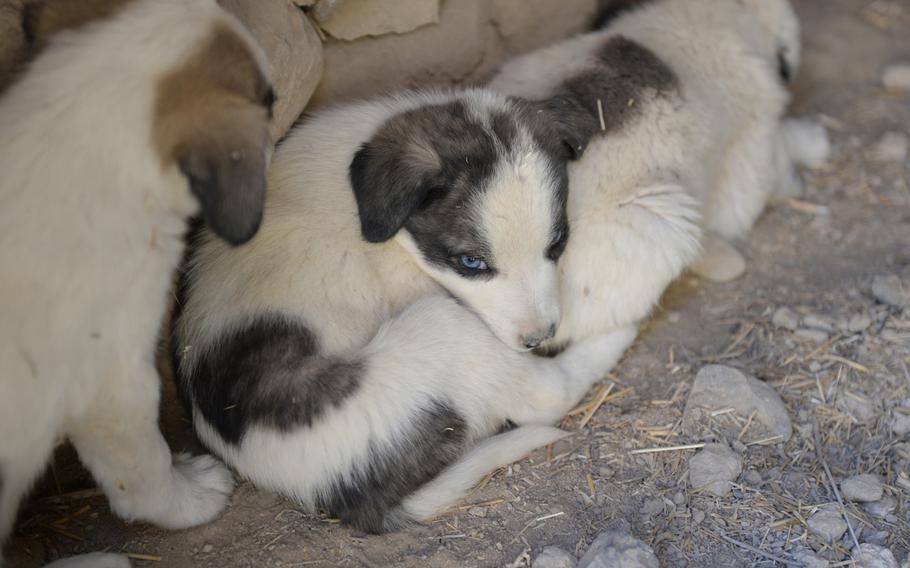 Puppies crowd together in a small room as American and Afghan forces search the surrounding compound for weapons caches, on Oct. 5, 2014. Complex surveillance has tracked rocket fire as originating from this village near Forward Operating Base Shank in Logar province, Afghanistan. (Jad Sleiman/Stars and Stripes) 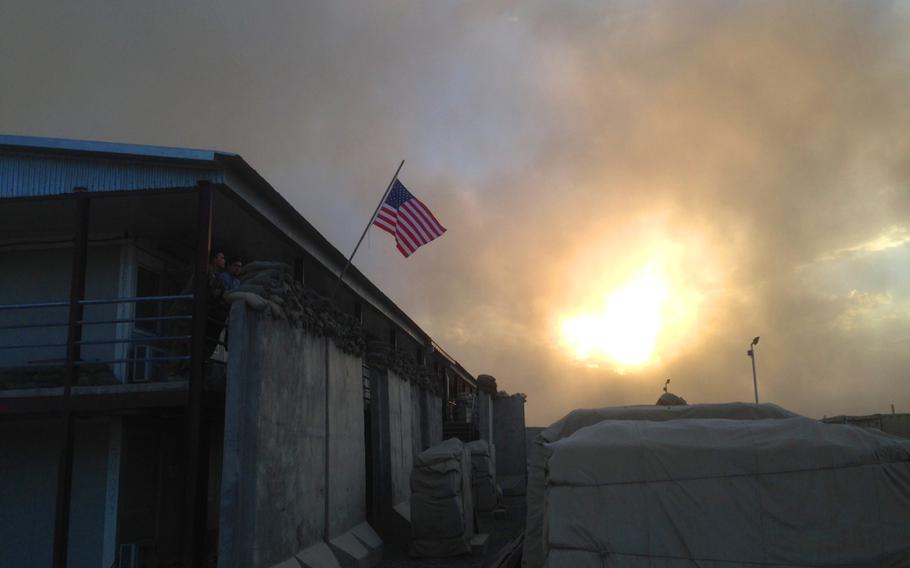 A cloud of dust approaches Forward Operating Base Shank in Logar province, Afghanistan, on Oct. 6, 2014. Shank will become one of the latest American bases to close in eastern Afghanistan later this month. (Jad Sleiman/Stars and Stripes) 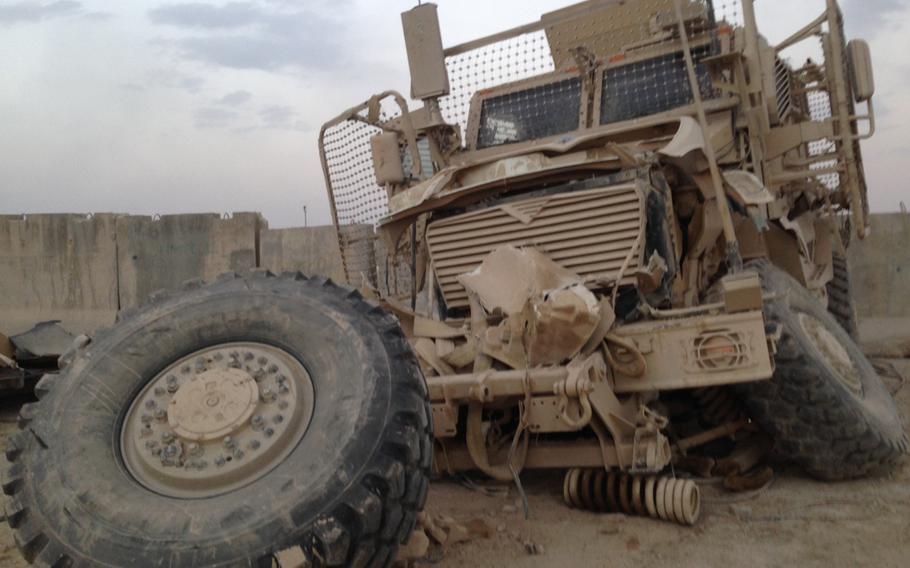 A damaged Mine Resistant Ambush Protected vehicle awaits transport Oct. 6, 2014, on Forward Operating Base Shank in Logar province, Afghanistan. It was one of two MRAPs to strike IEDs while out on patrol near Shank days earlier. (Jad Sleiman/Stars and Stripes)

At every base, the Taliban have been eager to send them out with a bang. Literally.

Soldiers of Company C, 1st Battalion, 504th Parachute Infantry Regiment are members of the last American battalion conducting full-spectrum combat operations in Afghanistan as the U.S. military prepares to pull its combat troops out of the country by the end of the year. Throughout the deployment, they’ve come face to face with an increasingly bold Taliban that threaten both departing Americans and the Afghan forces they leave behind.

“Fundamentally — as in Iraq — the U.S. is leaving behind an extremely fragile situation, which will be vulnerable to Taliban inroads in precisely the same places that were hard-fought when the U.S. troops were present,” said Sarah Chayes, a South Asia expert and senior associate with the Carnegie Endowment for International Peace in Washington.

Such vulnerability first became evident in the southern province of Helmand last year. The longtime Taliban stronghold, which produces most of the nation’s opium, saw a dramatic increase of Taliban activity after international forces began leaving near the start of this year’s spring fighting season.

It’s a common tactic of the insurgents.

“The Taliban want to appear to be driving the U.S. out,” said Anthony Cordesman, a strategy expert with the Washington-based Center for Strategic and International Studies. “They’re playing to local tribes, and if local tribes can attack the U.S. as it withdraws ... it strengthens the Taliban image but it gives a broader picture that the government is weak and that they can’t hold the territory. It sets the precedent for [next year’s fighting] campaign.”

Eastern Afghanistan presents its own challenges, with various Taliban-affiliated groups massing in the hundreds to attack the Afghan military.

“It’s a more confusing [mixture] of insurgent groups,” said Graeme Smith, a senior analyst with International Crisis Group in Kabul. “Every week, I feel like we hear a name of some different insurgent group that’s supposedly popping up or operating there.”

The fragmentation, coupled with increased influence and support from sections of the insurgency next door in Pakistan, complicates Afghan government efforts to reach a political solution to the Taliban influence, Smith said.

The Taliban have continuously insisted that all U.S. and NATO forces — whom they regard as foreign occupiers — must leave the country before they consider participating in the political process. The insurgents have vowed to continue fighting if any foreign advisers remain in Afghanistan after the withdrawal of coalition combat troops.

Still waging war While much of the focus of U.S. military action in Afghanistan has been on the withdrawal of combat troops, units like the 1-504 must keep their minds on the war going on in front of them. They have seen these insurgents in action across the region, at times in the form of mild harassing fire, at other times in brazen attacks more commonplace in the 13-year war’s past.

The battalion has lost two soldiers in combat: Sgt. 1st Class Samuel C. Hairston and Spc. Brian K. Arsenault. Both were killed while the battalion was trying to shut down a base in Ghazni.

Success at Ghazni was measured by the unit’s ability to keep the Taliban at least six miles from the base, which is about the maximum range of most indirect-fire weapons, said Capt. Nathaniel Dams, Company C commander.

The paratroopers say the tail end of that mission was the most dangerous, with near-daily firefights and multiple calls for close air support.

“We took contact from pretty much every cardinal direction,” said Spc. Cody Garecht, referring to a September battle during which twin A-10 gunships came to the soldiers’ aid. As fires controller, it’s Garecht’s job to call in such airstrikes. At least a handful of the bombs dropped by coalition forces in August — the most dropped in any single month in the past two years, according to a Boston Globe report — were in support of the paratroopers.

The Taliban, the paratroopers say, perhaps sensed the Americans were on their way out. Their increasingly bold attacks culminated the very day the paratroopers were leaving the FOB. It was a scenario almost unheard of this late in the war: a ground attack on an American base.

“When our [entrance] got attacked I think the Taliban were under the impression that we had already gone,” said Garecht. “A lot of local nationals were trying to come in because they thought we were gone and then all of a sudden we get attacked the same day.”

Shank was quieter, but far from peaceful. It was the soldiers’ last stop – the base was transferred to the ANA on Thursday — and still the Taliban continued to attack during their stay.

“Incoming! Incoming! Incoming!” an automated voice bellowed early this month across the largely empty FOB. A deep boom followed, briefly shaking the barracks. It was yet another rocket attack at the base that earned the ominous nickname “Rocket City.”

No one was hurt. Nothing was hit.

The 82nd’s paratroopers, however, recognized remaining danger, and pushed out to the surrounding countryside on a daily basis to stem the attacks. They did so on foot because the stubborn IED threat surrounding the base claimed two vehicles at the start of their mission.

Years ago, with more resources, the trucks could have been replaced. It’s a luxury removed at the American-designated twilight of the war.

“You really can’t sit idle if you want to effectively do the things you need to do to set the conditions for that final footprint on the FOB,” Dams said. “You have to create a buffer because you can’t always be worrying about sucking down rounds that disrupt your operations. Basically, buying time is what you’re doing.”

Shank has become the latest American base to shutter in the east — leaving the security of the province resting squarely on the shoulders of the Afghan National Army.

U.S. military officials declined to provide withdrawal numbers in the east, citing security concerns. They confirmed that as of Oct. 1, only 30 American bases remain nationwide after the transfer to the Afghans or complete closure of more than 800.

Afghans taking control Sgt. 1st Class Joseph Sapp, one of Company C’s platoon commanders, is on his sixth deployment to Afghanistan in the past nine years. In that time, he said, he’s watched Afghanistan’s security forces evolve from inauspicious beginnings into a real army.

The coalition participation in the fighting isn’t what it was during his past deployments, he said: not as constant nor as intense.

“We’ve helped where we can, we’re here to help, but it’s ultimately their country and they have to do their part,” he said. “I think all their training is starting to pay off; you see it here and there. They have the tools, now it’s up to them. I think they can be successful.”

Success may come at a cost too great for the nascent Afghan force, however. Afghan National Army officials recently told The Associated Press their combat deaths during this year’s fighting season have jumped 30 percent over last year.

Nationwide, the violence of this year’s fighting season is on track to eclipse the record violence seen during the 2011 American surge, according to statistics compiled by Smith and other analysts.

In the coming months, as the temperature drops and snow begins to clog mountain passes, fighting will likely slow to a crawl. Afghan forces will face their greatest test next spring, when they’ll have to make peace with the Taliban or defeat them without the help of American combat troops.

U.S. military officials have tried to put a positive spin on the increasing number of Afghan soldiers who have been killed or wounded: At least the Afghan forces are willing to fight, even if many die in the process.

But Cordesman gets a different impression from the numbers.

“There’s a tendency to confuse casualties for success,” he said, adding that, in his estimation, the ANA is still years away from real competency.

Since the number of U.S. advisers in Afghanistan is expected to be cut in half by the end of next year, Cordesman said, he expects significant ANA losses and reversals during next year’s fighting season.

And the years of military-to-military hand-holding between coalition forces and the ANA can’t make up for a dysfunctional central government, Chayes said, which is a major stumbling block to lasting security.

“Nothing changed in the underlying dynamics to ensure that the gains from the 2009-2010 surge would be maintained,” she said.