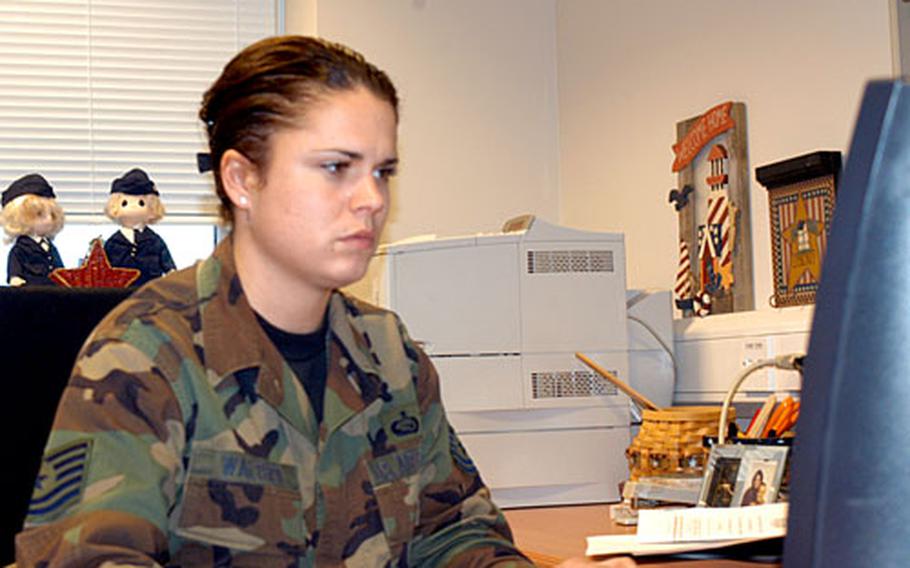 U.S. Air Force reservist Tech Sgt. Lorie Walther works at her office on RAF Lakenheath. The 29-year-old from Pennsylvania is one of 87 Air Force reservists serving in the United Kingdom as part of the Individual Mobilization Augmentee program. (Bryan Mitchell / S&S)

RAF MILDENHALL, England &#8212; Are you married to a European national and separating from the U.S. Air Force? Are you leaving the service but still have a spouse on active duty in Europe?

If so, and you want to keep racking up years of service toward retirement, the Air Force Reserve has an opportunity for you.

The Individual Mobilization Augmentee program is for people who want to transfer military training into a part-time position at an Air Force installation in Europe.

&#8220;If people are separating from the Air Force and staying here for a certain reason, they can participate in the IMA,&#8221; said Master Sgt. Robert Flores, the Air Force Reserve recruiter at RAF Mildenhall. &#8220;It&#8217;s a very good gig and a chance to practice your trade.&#8221;

It&#8217;s a lot like serving in the regular Air Force Reserve except there&#8217;s no potential of being deployed. The program is different in that it is offered primarily to servicemembers with prior active-duty experience.

The program is fairly simple in its format. Each IMA is required to serve 36 days per year, which includes a 15-day annual tour. Enlisting in the program also means an airman will serve on a specific base and not have to worry about being deployed downrange.

Tech Sgt. Lorie Walther is one of 87 IMA personnel currently serving in the United Kingdom. The 29-year-old Pennsylvania native serves at RAF Lakenheath in a personnel readiness function, cutting orders and helping airmen preparing to deploy.

Walther, whose husband is an active-duty airman in the U.K., was in the Air Force Reserve in Delaware before transferring.

Flores said base commanders are a big fan of the program for two reasons.

First, IMA reservists are paid out of the Air Force Reserve Command budget, which essentially means the base gets free labor.

&#8220;A lot of their main responsibility is to keep the base up and running when airmen deploy,&#8221; Flores said.

There are currently about 12,000 Air Force IMAs at bases around the world, according to the Air Reserve Personnel Center Office of Public Affairs. Their positions include weapons systems acquisition, aircraft maintenance, civil engineering, intelligence, public affairs, medicine, legal and in the chaplaincy.