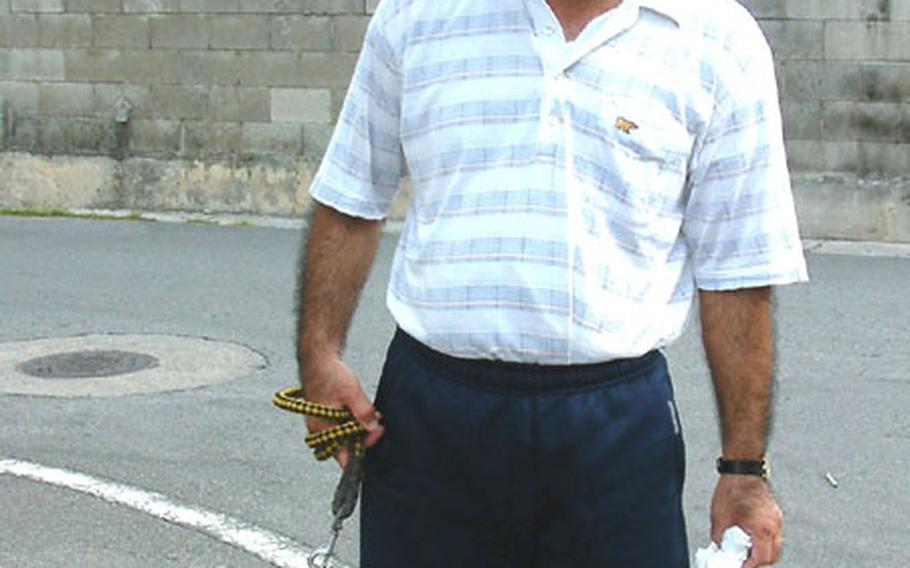 Masanao Miyazato, 53, a postal worker, took his dog, John, for a long walk in the park while his neighborhood was evacuated Saturday morning during the defusing of rocket-propelled grenades in Naha. (David Allen / S&S)

Masanao Miyazato, 53, a postal worker, took his dog, John, for a long walk in the park while his neighborhood was evacuated Saturday morning during the defusing of rocket-propelled grenades in Naha. (David Allen / S&S) 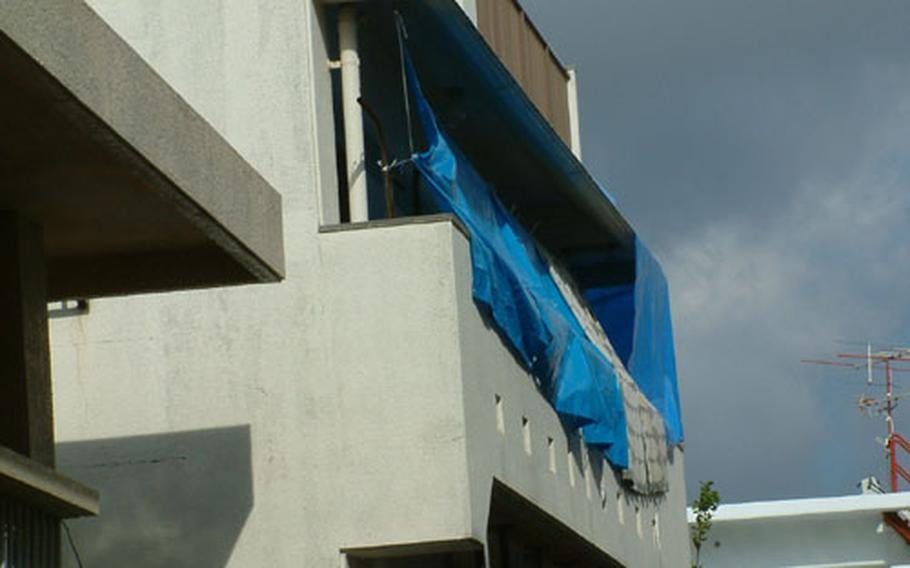 A cache of military surplus goods, including weapons, was found in this second floor apartment in Naha. (David Allen / S&S) 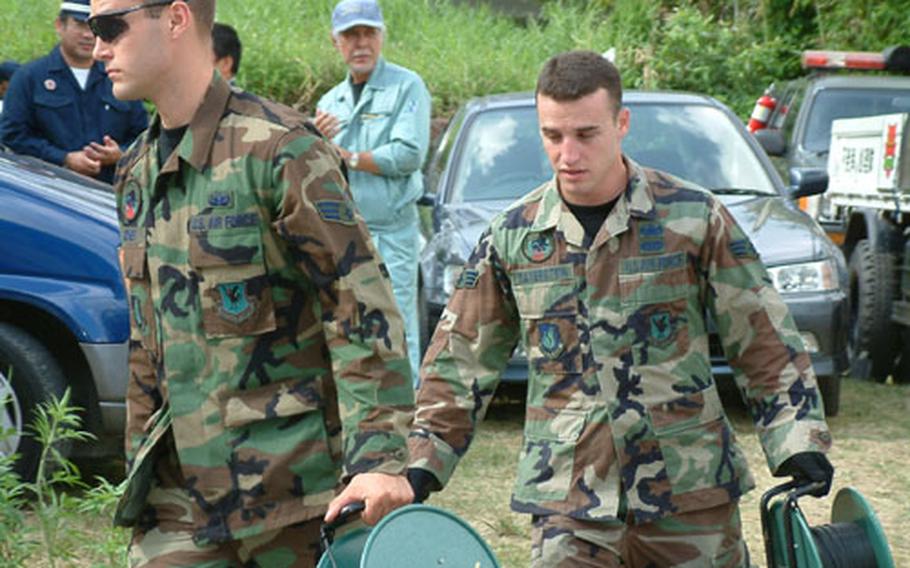 Two U.S. Air Force explosive ordnance experts from Kadena Air Base arrive in a Naha neighborhood Saturday morning to help defuse rocket-propelled grenades found in the apartment of a Japan Air Self-Defense Force sergeant. The seargeant, who collected and sold military surplus items at local flea markets, was killed when a grenade he was cleaning Aug. 31 blew up. (David Allen / S&S) 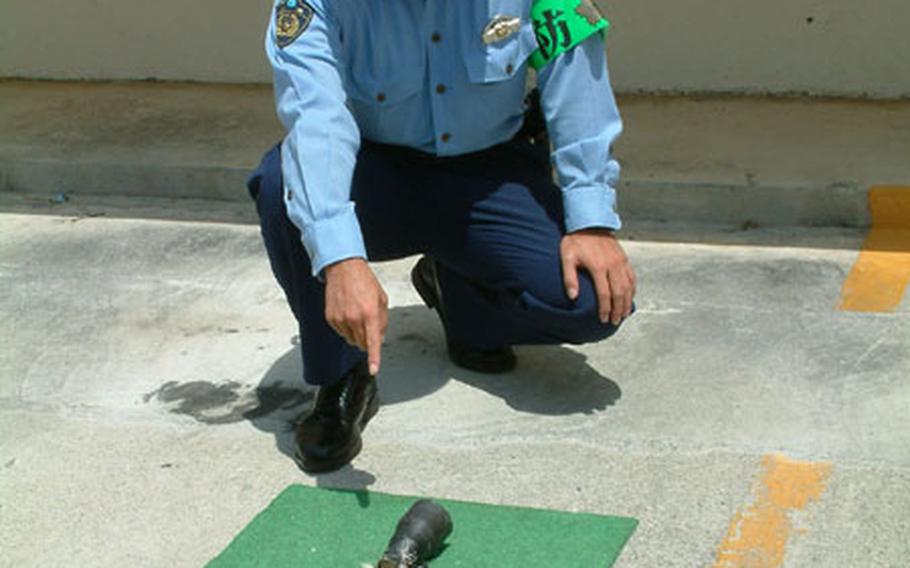 An Okinawa police officer points to a rocket-propelled grenade that was disabled Saturday morning in a densely populated Naha neighborhood. (David Allen / S&S)

Both apartments had rooms stacked floor to ceiling with military surplus items that Tamura allegedly collected and resold at Okinawa flea markets and surplus stores.

Tamura was killed Aug. 31 in an Okinawa City junkyard, when a rocket-propelled grenade shell he was cleaning for resale exploded. Okinawa police found 26 practice grenades in his van and launched an investigation into the source of the explosives.

Subsequent searches of his second-floor apartment in the Gushi district of Naha, near Naha Air Base, where Tamura was assigned as an auto mechanic, turned up more shells, shoulder-held grenade launchers, an M-16 rifle and more than 500 rounds of ammunition, according to police.

Police then discovered that Tamura had rented a duplex home in the nearby Oroku district. A search of that building uncovered an M-16 rifle with an attached grenade launcher, 50 cartridge belts and ammunition, gun parts and two rocket-propelled grenades.

U.S. Air Force explosive-ordnance experts used a remote-controlled robot to cut the shells in half to disable the grenades, an Okinawa police spokesman said.

Tamura&#8217;s wife and two children were evacuated from their home in the six-apartment complex early last week and are in seclusion. Several neighbors, evacuated Saturday, said they were shocked by the week&#8217;s events.

&#8220;I never dreamed of such dangerous things being stored in our neighborhood,&#8221; said Choken Matsushima, 65, as he was leaving home for safety with his 2-year-old grandson, Ryusei Shinzato.

Down the street, a Naha Fire Department van with a loudspeaker cruised the neighborhood, urging residents who lived within 100 meters of the apartment to evacuate from their homes.

Okinawa police have formed a task force of more than 60 officers working with the U.S. and Japanese military to find out where Tamura got the weapons. Some sources said Tamura scrounged around waste disposal sites of companies with trash contracts on the U.S. military bases on Okinawa, picking up discarded items for resale at Okinawa flea markets and military surplus stores.

But discarded ammunition would not be among the items collected by the disposal companies, a spokesman for one of the firms told police.

An illegal flea market on a public access road through an unused part of Kadena Air Base was ordered closed in the wake of the investigation.

Most, like Masanao Miyazato, a 53- year-old postal employee who decided to take his dog, John, on a long walk, busied themselves with tasks outside the area.

&#8220;I was really shocked to learn that such highly explosive materials were stored in our neighborhood,&#8221; Miyazato said. &#8220;I did not know the man, but this is an area where many self-defense force members and their families live.

Tamura lived with his wife and two children in a six-unit apartment building. The balcony of his second-floor rear apartment was covered with blue tarpaulin and an old drape, while bomb disposal experts worked inside. Beneath the balcony, police had built scaffolding for additional support in case of an explosion.

Some residents of the apartment building were visibly upset, as they left and encountered a gaggle of cameramen and reporters.

A 29-year-old woman who lived across the street said she was scared when she first heard the news about her neighbors.

The first deactivation in the Gushi neighborhood was completed at 10:50 a.m. The second grenade was disabled at 11:53 a.m. Police and the bomb disposal teams then displayed one of the rocket-propelled grenades for view for the press before preparing for the evacuation of the Oroku neighborhood.

At a command center set up in a nearby playground, Naha Mayor Takeshi Onaga expressed his regret concerning the accident and demanded an &#8220;early and thorough&#8221; investigation into the matter.

&#8220;We need to know how these weapons were obtained,&#8221; he said. &#8220;Was this an isolated event committed by one individual or is there an organized group involved? We want full disclosure of this incident.&#8221;

He said the incident has damaged the good reputation the JASDF had in the community.

&#8220;Even though it was done by one individual member, people tend to associate the individual with the organization he belongs to,&#8221; he said. &#8220;We expect the JASDF to seriously reflect on this event.&#8221;