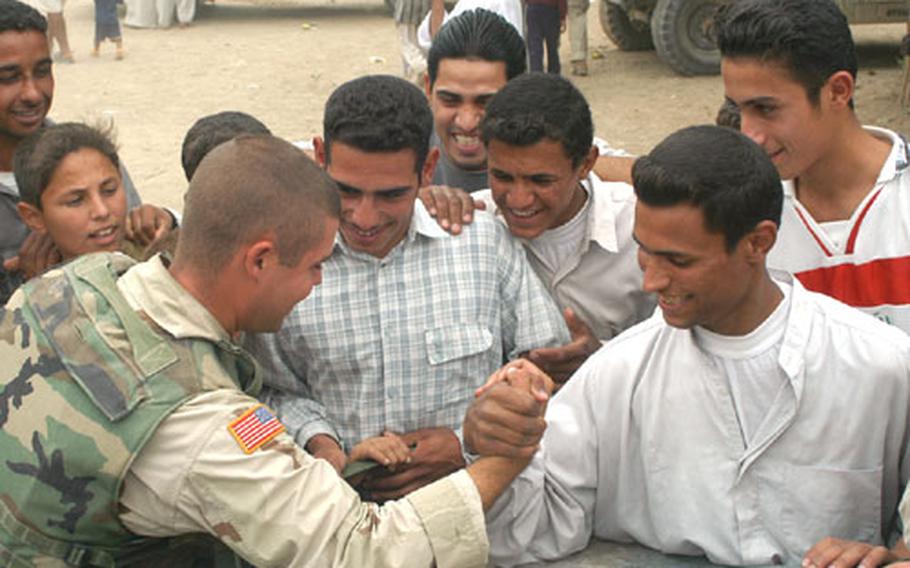 Spc. Sean Raby of the 1st Battalion, 152nd Infantry, arm wrestles an Iraqi man from the village of al-Jawdia on the hood of a humvee as members of the 161st Area Support Medical Battalion provided medical support to villagers in the nearby clinic. Raby lost the match, but chalked it up to improper technique on the Iraqi&#39;s part. (Jason Chudy / S&S)

Spc. Sean Raby of the 1st Battalion, 152nd Infantry, arm wrestles an Iraqi man from the village of al-Jawdia on the hood of a humvee as members of the 161st Area Support Medical Battalion provided medical support to villagers in the nearby clinic. Raby lost the match, but chalked it up to improper technique on the Iraqi&#39;s part. (Jason Chudy / S&S) 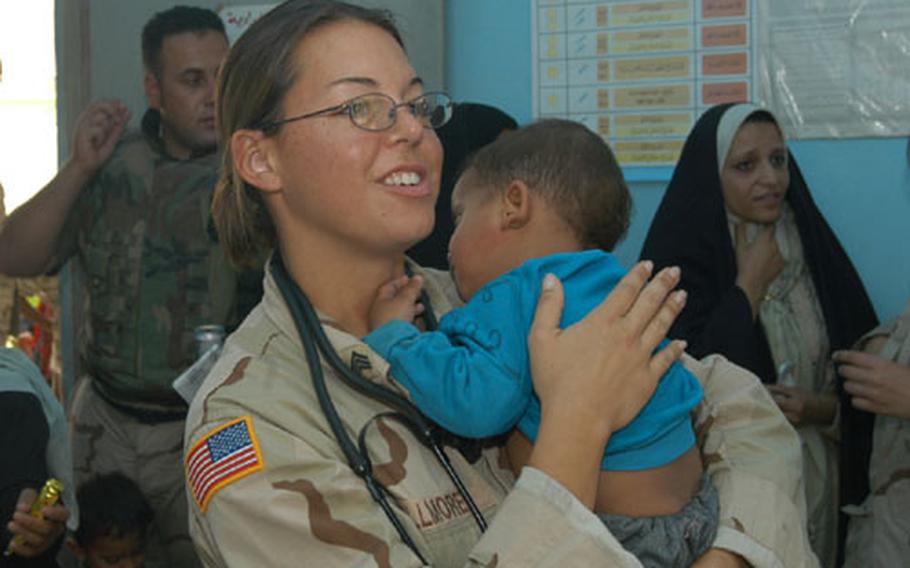 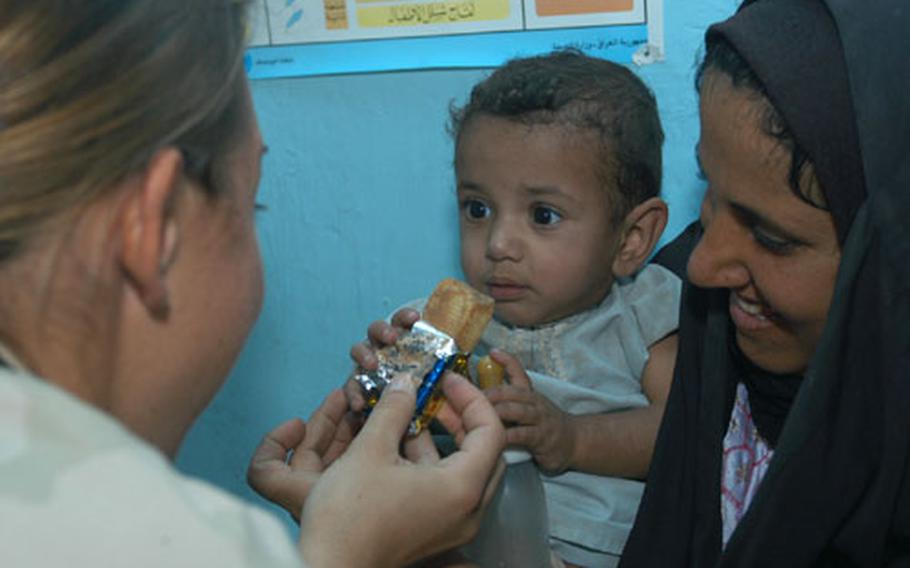 Sgt. Christy Fillmore hands a young Iraqi baby a cookie wafer snack as the child&#39;s mother smiles. Fillmore and the other members of the five-member 161st Area Support Medical Battalion team passed out sweets to all of the children who came to the clinic in the village of al-Jawdia, Iraq. (Jason Chudy / S&S) 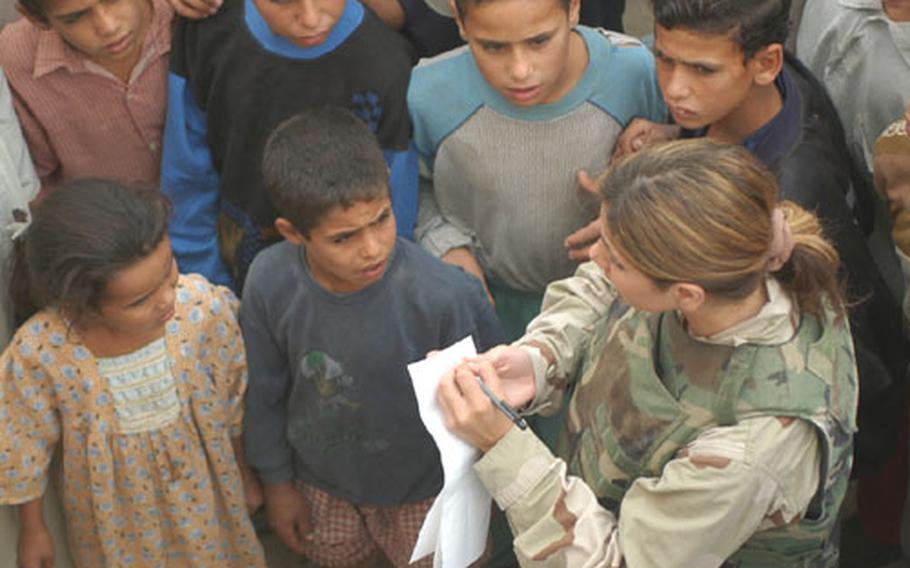 Translator Holly Saco of Sterling Heights, Mich., writes down the names of Iraqis wanting medical care at the al-Jawdia, Iraq, clinic. The town&#39;s children were ever-present, crowding in to watch whatever a soldier or civilian was doing. (Jason Chudy / S&S) 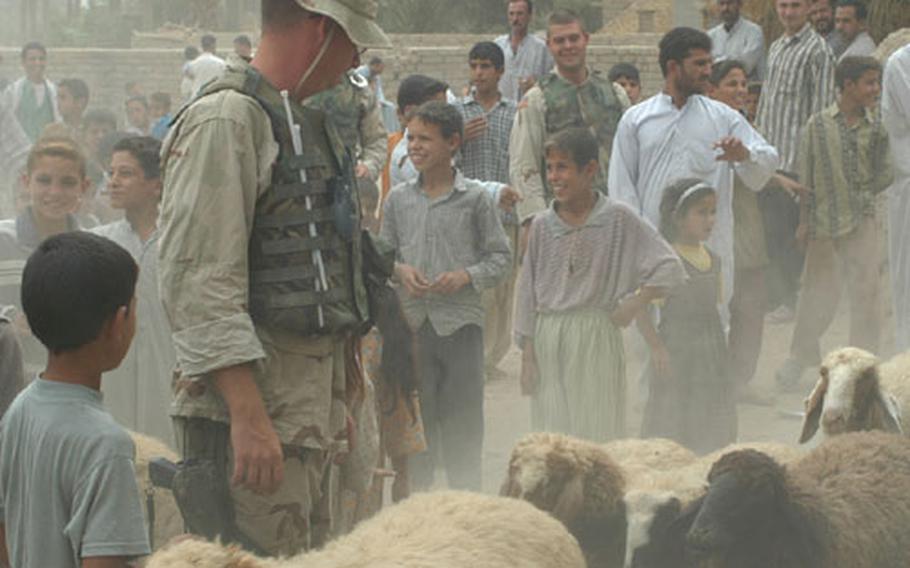 A sergeant with the Illinois National Guard&#39;s 333rd Military Police Company watches as a small herd of sheep runs through the village of al-Jawdia, Iraq. Children chased the sheep a few meters into a dead-end alley and then harassed them as they came back out a few minutes later. This was the only time that the children&#39;s focus wasn&#39;t on the soldiers. A five-person team from the 161st Area Support Medical Battalion was in the town providing medical care for villagers. (Jason Chudy / S&S)

So goes another medical visit to one of the small villages near Camp Scania, about 80 miles south of Baghdad.

If only it were this simple.

About a dozen people &#8212; black-robed women, soldiers, translators and children &#8212; crowd into a small room, its ceiling fan still because of no electricity. Light comes from the room&#8217;s two windows, their lower halves frequently blocked by children&#8217;s faces.

Another dozen people crowd a hall outside the office and even more wait in front of the clinic, all hoping for a turn inside.

McGuinness says his team provides medical care to one or two villages a week.

His translator, Holly Saco of Sterling Heights, Mich., passes on the villagers&#8217; complaints, sometimes even two people&#8217;s problems at once.

McGuinness quickly makes a diagnosis, prescribes Motrin for a woman&#8217;s sore back here or nasal spray for another woman&#8217;s sinus allergies there.

&#8220;Sometimes just touching and talking to them does more than anything,&#8221; Perkins said after the first few patients.

Most, however, leave with some sort of medicine, ranging from over-the-counter pain relievers to prescription antibiotics.

One woman asks about a wheelchair for her disabled son, whom she&#8217;s just carried in. This isn&#8217;t the woman&#8217;s first wheelchair request.

McGuinness turns to Perkins, who has been writing down all the supplies they need to order.

McGuinness says that the Army doesn&#8217;t carry pediatric wheelchairs in its supply inventory and the boy will most likely get a full-sized wheelchair.

Perkins writes a pass for the mother, telling her to come to the base in two weeks. They&#8217;re banking that supply will have produced a wheelchair by then.

Al-Jawdia is one of the closest villages to Scania, which is about 1.5 miles away. Even so, it still took the six-vehicle convoy about 30 minutes to make the drive down the one-lane dirt road that also serves as the bank of a shallow canal.

Eventually al-Jawdia&#8217;s power comes on and the ceiling fan begins to spin, creating a breeze that evaporates everyone&#8217;s sweat and stirs up the cigarette smoke from a man in the corner.

The smoke causes the medical workers to stop, turn in his direction, and ask him not to smoke in the treatment room.

He picks up his cigarettes and leaves the building.

Outside, as the temperature and humidity rise, so does the activity level of the town&#8217;s residents.

Wherever a Humvee is parked along the street, a group of children and young men stands nearby. Childrens&#8217; hands try to reach in windows or up to gunners, who spend half their time providing security and the other half yelling at children to keep away.

At one point, a herd of sheep passes through the village and the children chase them down a dead-end alley. Only this once are the soldiers not the only focus of attention.

Spc. Sean Raby of the 152nd arm-wrestles one of the Iraqi men on the hood of his Humvee, drawing a crowd of a dozen or so cheering kids. Raby loses and claims the match was unfair.

Two soldiers at another Humvee pass a football back and forth. It eventually makes it into the hands of village kids, who ask over and over if they can keep it.

The ball remains missing in action as the soldiers pack up what&#8217;s left of the medical supplies after a few hours in town. They pack themselves in their Humvees and set off for the half-hour drive to Camp Scania.

It&#8217;s been a successful visit. About 100 men, women and children have been seen and treated.

As one Humvee pulls out, however, a young boy runs up to the driver&#8217;s side window. He offers the driver a just-prescribed bag of Motrin for $5.