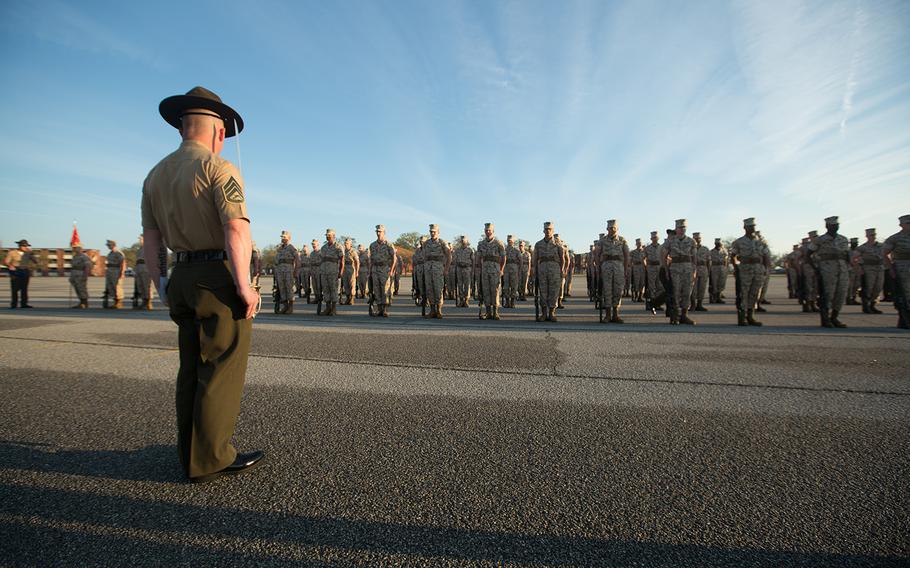 WASHINGTON – A former Parris Island drill instructor was acquitted Wednesday of hazing-related charges filed against him following an investigation into allegations of wide-spread mistreatment of recruits at the Marine Corps’ storied South Carolina recruit depot, a Marine spokesman said.

A jury of enlisted Marines and officers found Sgt. Riley R. Gress not guilty of charges of cruelty and maltreatment, failure to obey orders and making false statements following a three-day, misdemeanor-level special court-martial, said Marine Capt. Joshua Pena, a spokesman for Marine Training and Education Command. The trial was held at Marine Corps Base Quantico in Virginia.

Gress faced up to one year in prison and a bad behavior discharge if convicted. He was one of 15 Parris Island drill instructors removed from duty last year as the Marine Corps investigated allegations of hazing and abuse of recruits raised after a 20-year-old Muslim recruit fell to his death. That recruit, Raheel Siddiqui, died March 18, 2016, 11 days after arriving at Parris Island, after he fell 40 feet down a barracks stairwell. Siddiqui’s death was ruled a suicide, but a Marine Corps investigation found he was mistreated by drill instructors before he died.

Gress’ charges were not directly related to Siddiqui’s death, according to a Marine Corps statement in December.

He was the first Marine tried on charges related to the hazing scandal and was the most junior-ranked drill instructor charged with a crime. The Marine Corps has not determined what Gress’ next assignment will be, Pena said.

Charges against four of those Marines are not related to Siddiqui’s death, according to the Marine Corps.

One, Gunnery Sgt. Joseph Felix, faces at least some charges linked to the recruit’s death. According to a Marine Corps investigation report, Felix slapped Siddiqui moments before he ran into the stairway and jumped. Felix is also accused of calling another Muslim recruit “a terrorist” in 2015 and forcing him into a clothing dryer and running it with the recruit inside.

Felix is expected to face charges of cruelty and maltreatment, drunk and disorderly conduct, failure to obey a lawful order, false official statements and obstruction of justice in a felony-level general court-martial in August at Camp Lejeune in North Carolina.

Staff Sgt. Michael Eldridge also faces a general court-martial in September at Camp Lejeune connected to forcing the Muslim recruit into a dryer. He is accused of cruelty and maltreatment, drunk and disorderly conduct, making a false official statement and failure to obey orders.

His charges are not related to Siddiqui’s death, according to the Marine Corps.

The other former drill instructors charged are not implicated in either Siddiqui’s death or the dryer incident.