Parents: We should have been informed sooner of molestation reports 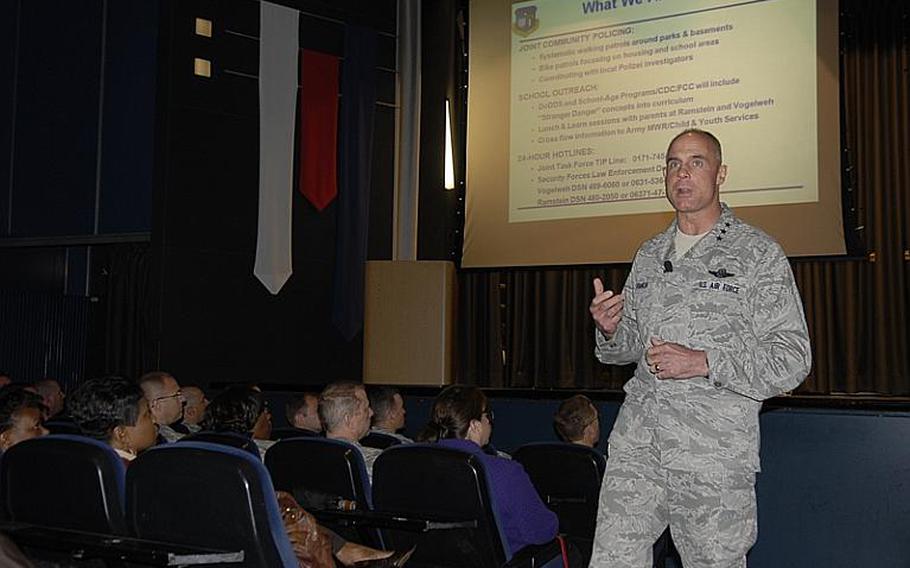 Lt. Gen. Craig Franklin, the commander of the Kaiserslautern Military Community and 3rd Air Force, talks during a town hall meeting at Ramstein Air Base on Wednesday about child safety issues following recent reports of alleged child molestations and an alleged attempted child abduction at military bases in the Kaiserslautern area. ()

RAMSTEIN AIR BASE, Germany &mdash; Angry and concerned parents confronted Air Force officials and investigators Wednesday, demanding to know why the community was not informed sooner that someone may be trying to molest or abduct children as they play in on-base housing areas or playgrounds.

&ldquo;I have three children; I&rsquo;m so angry right now, my voice is shaking,&rdquo; one parent said Wednesday at a town hall meeting to answer questions about three reported cases of child molestation or attempted abduction. Officials said the cases were first reported in January but date back to last summer.

The woman, who lives in Ramstein Air Base housing, said rumors of one of the alleged incidents were going around base last fall. &ldquo;We should have had this town hall meeting back then,&rdquo; she said.

Some parents on Wednesday said they were so shaken by the threat of a child predator with base access that they don&rsquo;t even let their kids walk the dog or take out the garbage alone.

Franklin, who has been KMC commander since March, said officials only now had enough information to hold a town hall meeting. Investigators weren&rsquo;t able to connect the dots until after the third reported incident, due in part to delays in reporting and vague suspect descriptions provided by young children, officials said.

The first incident &ndash; also an alleged molestation &ndash; occurred in August, but it was not reported until January, Air Force officials said Wednesday.

More details weren&rsquo;t released because a decision was made &ldquo;to play it close to the chest,&rdquo; for the sake of the investigation, said Chief Master Sgt. Craig Adams, the 3rd Air Force Command Chief Master Sergeant. Rather than spook the suspect, &ldquo;they wanted to draw the person in,&rdquo; he said.

The last case was reported April 24, three weeks after the alleged molestation, officials said. Franklin said the alleged victim in that case provided the most detailed description of a suspect, and that&rsquo;s also when investigators thought the cases might be connected.

&ldquo;If the last case was reported April 24, we should have known about it the next day, or the next night, because you know who&rsquo;s going to be the most vigilant, is the moms,&rdquo; an Air Force spouse and mother of two daughters said after the town hall.. &ldquo;Had this come out eight months ago, there&rsquo;s a possibility we could have prevented the last two.&rdquo;

Another Air Force spouse and mother who declined to give her name, said she first heard there was some kind of incident involving a child sometime last winter through Facebook. &ldquo;A lot of people didn&rsquo;t believe it,&rdquo; she said. People at the town hall also pressed officials for more details on the incidents and suspect. Did the incidents occur during a certain time frame? Is a certain age group being targeted? Where were the alleged crimes committed? What methods did the suspect use to lure the children?

Robert Fields of the Air Force Office of Special Investigations said he couldn&rsquo;t provide more details beyond what&rsquo;s already been released. A suspect approached the alleged victims by both foot and car, he said.

Katie Fulmer, 30, an Air Force spouse and former airman, said she hasn&rsquo;t seen increased foot or vehicle patrols in her neighborhood on Ramstein, as officials had promised last week that there would be. &ldquo;I feel that there could be more, especially when kids are going to school and kids are getting out of school,&rdquo; she said.

She has two girls, a 5-year-old and an 8-year-old. With her older daughter, Fulmer said she was making sure she was aware of what&rsquo;s going on.

&ldquo;They don&rsquo;t play outside without me,&rdquo; she said. After 11 years living on Air Force bases, &ldquo;I&rsquo;ve never had to deal with an issue like this on base,&rdquo; she said. &ldquo;It&rsquo;s just mind-boggling. People think living on base is so safe. This shows &hellip; there&rsquo;s a false sense of security.&rdquo;

After the town hall, Fulmer said she was pleased with the briefing. &ldquo;I feel like they have a handle on the situation,&rdquo; she said.

One mother said she was encouraged that Franklin was open to her suggestion of creating some type of &ldquo;Amber Alert&rdquo; to quickly notify base personnel in the event of a future incident involving a child. &ldquo;That&rsquo;s huge,&rdquo; she said.

Franklin said he also plans, in response to a suggestion made at Tuesday&rsquo;s town hall meeting at Vogelweh, to look into implementing a neighborhood watch system in base communities, and organizing community groups that parents could tap into for help in getting their kids to and from school.

Franklin reiterated that he needs the help of all parents to keep children safe. They not only need to watch their own children, he said, but they also need to hold their neighbors accountable to do the same.

And all parents need to be extra vigilant, he said. &ldquo;If you see someone lurking around an area where children are and you don&rsquo;t know them, it&rsquo;s time to call security,&rdquo; Franklin said.