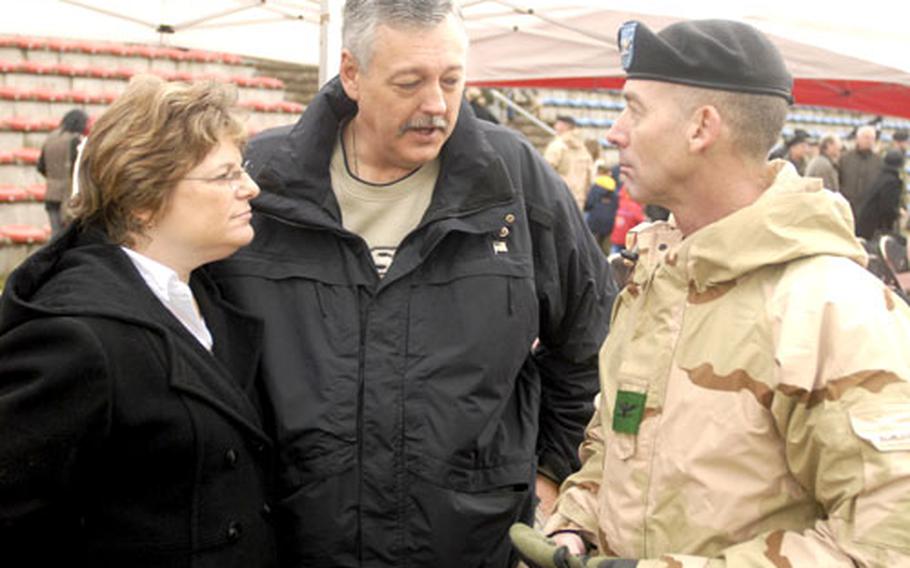 The words are easy to say, even when an unpopular war has divided a country. But Gary Swanson and his wife, Kelly, have carried the premise beyond expression, and in their own way, they&#8217;ve picked up living their son&#8217;s life where he left off.

Earlier this week, the couple flew from Maryland to Germany on their own dime to attend the welcome home ceremony of the 1st Armored Division&#8217;s 2nd Brigade Combat Team &#8212; their son&#8217;s former unit.

&#8220;It brings another chapter of healing for us to be here with the men who served with our son. It was important for them to be there with us, and they wanted us here.&#8221;

In Iraq, Staff Sgt. Swanson was tight with the eight soldiers he led as a dismounted patrol leader. On his personal Web page, he had written, &#8220;They are my life and my family right now. I would do anything for them even if it means giving my life to save theirs.&#8221;

His parents have adopted his devotion to those soldiers and others in his battalion, the 2nd Battalion, 6th Infantry Regiment.

The couple has visited wounded members of their son&#8217;s unit at Walter Reed Army Medical Center, which is not far from their home in Rose Haven, Md.

In order to continue helping those and other wounded soldiers, the Swansons started a memorial fund, established in their son&#8217;s name. The fund will provide aid and endowed scholarships to soldiers and their families.

Speaking with other parents who&#8217;ve lost children in Iraq has also helped them cope with the loss of their son, though they wouldn&#8217;t discuss those conversations. &#8220;There are some things as a parent, only parents could know what we&#8217;re going through,&#8221; Gary Swanson said.

While some parents became vocal critics of the war after losing a son or daughter in Iraq &#8212; Cindy Sheehan is famous for protesting outside President Bush&#8217;s Crawford, Texas, ranch &#8212; the Swansons have embraced the military and its mission in Iraq.