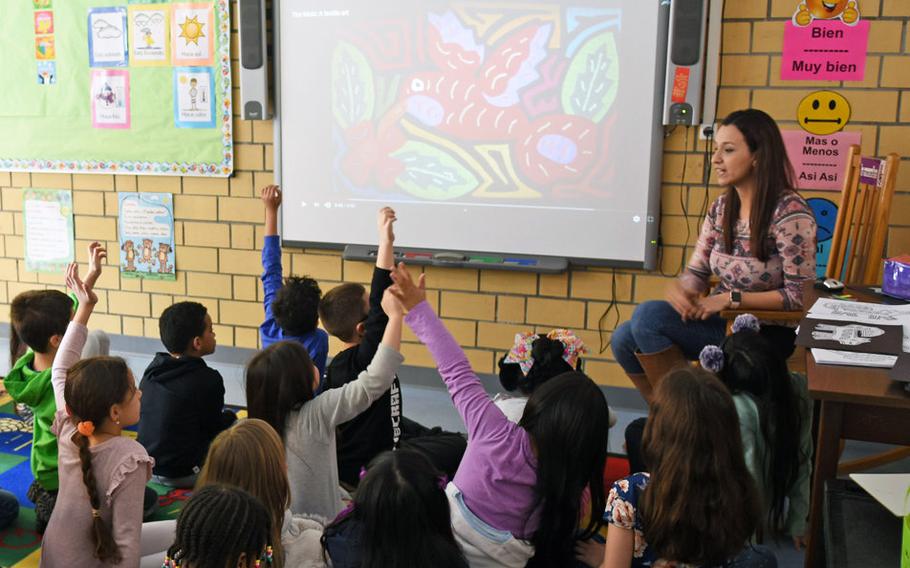 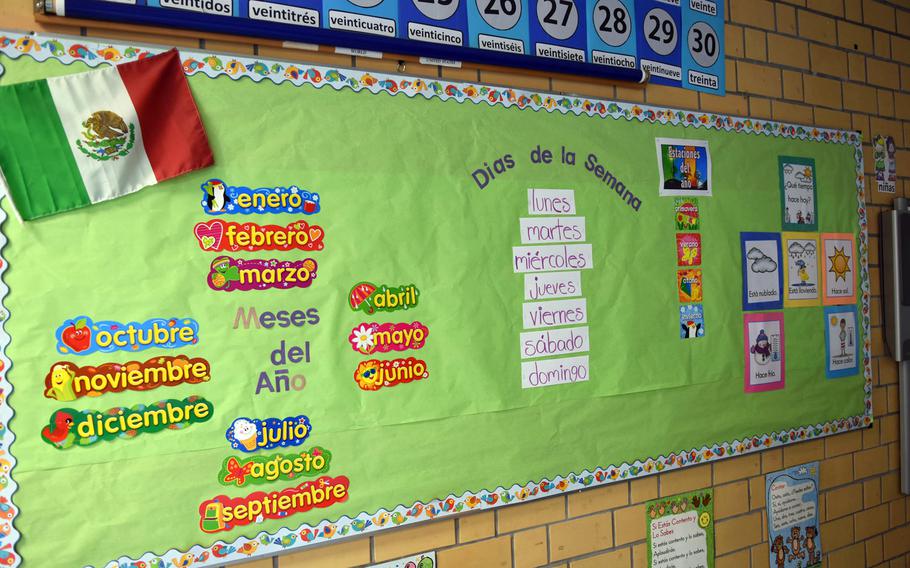 Buy Photo
The months and days of the week and other words are displayed in Spanish in the FLES classroom at Vogelweh Elementary School near Kaiserslautern, Germany. (Jennifer H. Svan/Stars and Stripes) 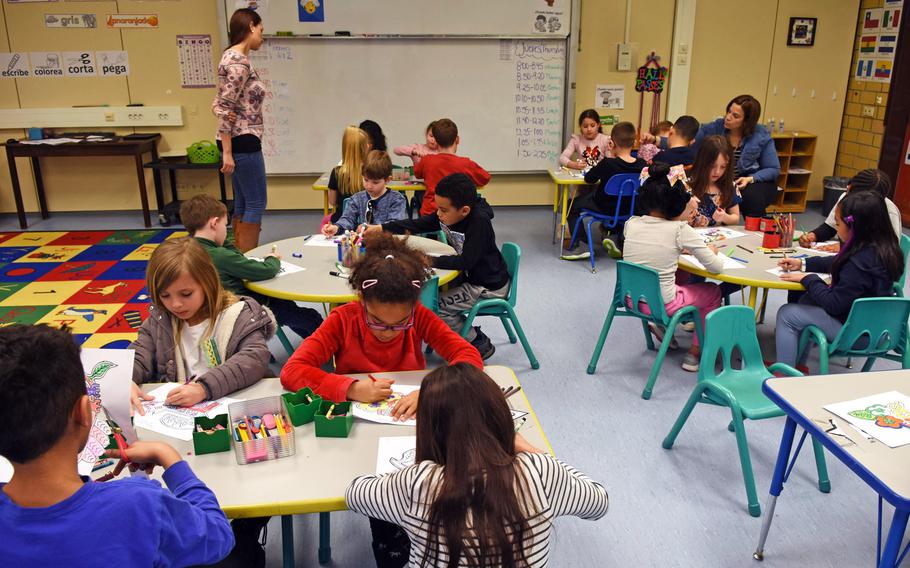 KAISERSLAUTERN, Germany — The U.S. military’s school system is getting rid of a popular Spanish language program offered at dozens of its elementary schools overseas and stateside — and parents aren’t happy about it.

The Department of Defense Education Activity announced in school newsletters late last year that it was discontinuing its Foreign Language in the Elementary School — or FLES — at the end of the current school year.

The program cut is part of a larger cost-saving measure to trim some 300 teachers in DODEA, a move that will increase middle and high school class sizes and free up funds for other priorities, such as the continued rollout of new college and career-ready academic standards, DODEA officials have said.

Parents, meanwhile, have expressed disappointment with the decision in interviews with Stars and Stripes and on social media.

“I’m absolutely disappointed and feel like everybody loses,” said Jessica Moisan, an Air Force spouse whose children participate in FLES at Sembach Elementary School near Kaiserslautern.

“At least keep it running in the schools where it’s thriving.”

‘Call to action’ FLES began as a DODEA pilot program in 2006. The intent was to introduce children to a second language at a young age, heeding a call to action from Defense Department leaders to increase the nation’s foreign language proficiency and cultural understanding following the Sept. 11, 2001, terror attacks.

“DODEA was given the charge by one of our reporting authorities to institute some type of foreign language program in the elementary schools,” said Lisa Holloway, DODEA chief of curriculum and standards. The goal was to help students “have a thirst for being at least bilingual,” so after they graduated “they’d be more marketable.”

FLES was designed to provide a minimum of 90 minutes of Spanish instruction per week. It started in 27 schools and expanded to 61 schools in 2008, including 18 in Europe. It’s mostly offered in grades kindergarten through third, though more than a dozen schools expanded the program to include fourth and fifth grade and, in a few instances, sixth grade.

DODEA made the decision to end FLES based on a 2014 review that found inconsistencies between schools in the program, including with curriculum, quality of instruction, and teacher language fluency, among other factors, DODEA officials said.

FLES classrooms were observed and teachers and students were interviewed, Holloway said.

“I only observed maybe five FLES classrooms and I never saw the same thing taking place in any of those classrooms,” she said.

DODEA’s evaluation of FLES included a visit to the schools that were part of the pilot and any other nearby schools that subsequently added a FLES program, DODEA spokesman Will Griffin told Stars and Stripes.

Holloway said some schools were using the original curriculum from the pilot while others created their own curriculum or used online materials.

Language ability varied. Some FLES teachers were native Spanish speakers while others only had one college-level Spanish course, the minimum language requirement for the program, she said.

Additional findings DODEA shared from the “internal summary” of the review noted that many schools decreased the 90-minute per week FLES time to expand the program to grades 4 to 6. There was also little evidence of differentiation between gifted, more advanced Spanish speakers, non-native English speakers and special education students.

Holloway said some students thought very highly of the program while others “felt it was a place keeper,” especially some of the fourth- and fifth-grade students who told evaluators “it was not the same level of rigor … that they would receive in their core classes,” she said.

DODEA currently has world language standards – but there’s no standard that says students should have exposure to foreign language from kindergarten to 12th grade, Holloway said.

“I do recognize that there were areas where this program was really flourishing and I applaud those areas …,” Holloway said. “I hope that one day we will be able to reinstitute a viable FLES program where all of our elementary students will benefit and benefit at the same level.”

Singing songs in Spanish In the U.S., foreign language instruction in elementary schools appears to be on the decline. In 1997, 31 percent of elementary schools taught languages compared to 25 percent in 2008, according to a survey by the Center for Applied Linguistics published in 2011. The decrease was mostly seen in public schools; more than 50 percent of private U.S. schools that were surveyed offered some type of language classes.

But military parents say DODEA should be leading the charge in language instruction, given that so many military families spend time overseas.

“To me, it’s just so confusing why it’s not something we’re investing in, especially with this demographic,” Moisan said.

She said both her kindergartner and first grader have picked up some Spanish and look forward to FLES class at Sembach.

“They come home, and they sing songs, point out colors (in Spanish),” she said. Spanish has become “part of their daily conversation. When they found out they would not have it next year … my daughter cried.”

Time and intensity Research points to numerous benefits of foreign language study in the early years, from improved cognitive ability to higher achievement in reading and math.

Studies show that time and intensity are key factors in language acquisition. FLES can lead to limited proficiency if the program is sequential and meets at least 75 minutes per week for two years or more. Immersion programs, where students are exposed to a foreign language at least 50 percent of classroom time, have shown to be more effective than FLES.

A native Spanish speaker from Mexico, Sanchez has taught FLES for four years.

She speaks to her students in Spanish, then repeats her words in English. Many of her students can count to 40 or 50 in Spanish, she said; they know their colors, some commands and greetings.

“Most of these kids are going back to the States where Spanish is the second most spoken language” after English, she said.

Trying to save the program Air Force Tech. Sgt. Charles Crespo, an aircraft maintainer at Spangdahlem Air Base from Puerto Rico, said the school’s FLES program is not only beneficial for his son, a native Spanish speaker, but also for his son’s first-grade classmates, who try to converse with his son in Spanish.

“I’ve seen it numerous times, kids trying to interact with my kid in Spanish,” he said.

Crespo also serves as a Spanish translator in the Air Force’s language program and has traveled extensively to Latin America and other Spanish-speaking locales in that role.

“I know how important cultural (understanding) and language is for the Air Force,” he said. “And how it’s so important for our kids. That’s why it’s so upsetting to me” to see FLES go away.

The Hispanic club at Spangdahlem has cooked for the kids on Cinco de Mayo and is planning a farewell event for FLES in May, Crespo said.

“I know a lot of parents, they’re disappointed. They don’t want to see it go,” he said.

Moisan posted a survey on Facebook asking parents their opinion of FLES last fall. “Within the first day, over 250 people responded: It was a resounding, “Yes, we think this program is important and we want to keep it,’” she said.

A member of Sembach’s school advisory committee, Moisan worked with the committee to try and save the program at Sembach, to no avail.

Moisan said she was told one possible solution DODEA is considering is making FLES an after-school program.

“That was upsetting to me,” she said. “That doesn’t reach the whole student body.”