Parents have work to do before school starts 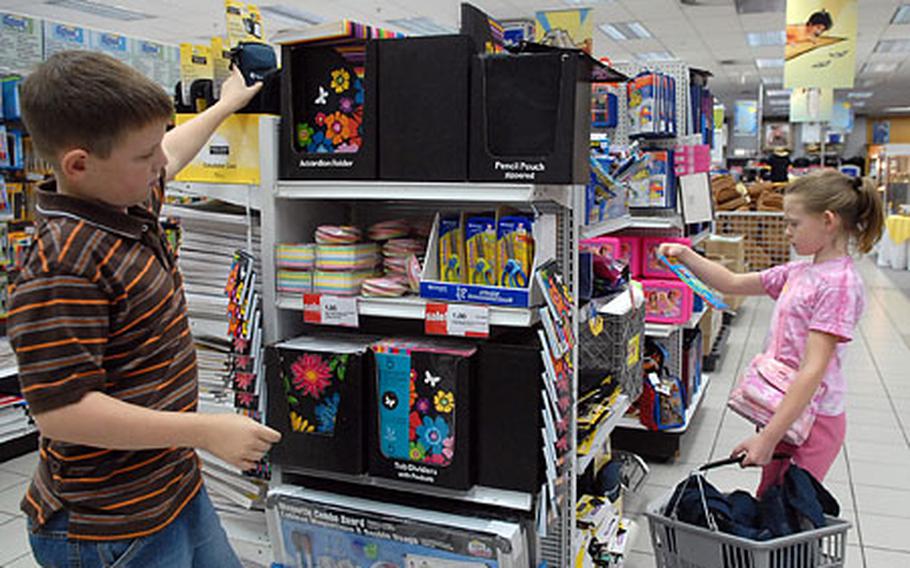 Two students shop for school supplies at the Hainerberg post exchange in Wiesbaden, Germany. DODDS-Europe officials are telling parents to visit the agency&#39;s Web site to get the accurate list of needed supplies for the new school year. (Michael Abrams / S&S)

There&#8217;s only about two weeks of summer vacation left for most children who will attend Department of Defense Dependents Schools this fall.

That means it&#8217;s time for a lot of parents to get some work done.

Dennis Bohannon, public affairs officer for DODDS-Europe, clicks off three topics parents should have at the top of their lists: registration, vaccination and school supplies.

Parents can always wait to register their children at the last minute. But that can create problems in the classroom.

&#8220;The figures are very important to us, because it helps us determine how many teachers, classrooms and supplies we&#8217;re going to need,&#8221; Bohannon said.

DODDS officials suggest that those who haven&#8217;t registered try doing so online at www.eu.dodea.edu/.

About 31,450 students had registered through Wednesday.

As far as school supplies go, DODDS-Europe has posted lists on its Web site that it says will trump any list supplied by individual schools or teachers.

He said the official lists were posted for the first time to help parents avoid confusion and save them from purchasing supplies students might not need. He said since children work at different paces, the amount of some supplies &#8212; such as pencils or paper &#8212; will probably vary. Additional purchases might be needed later in the school year.

Finally, parents need to make sure their children have all the proper vaccinations before school starts.

Bohannon said parents need to check to see if their children have moved into a different age group that requires a different set of shots.

Jeri Chappelle, public affairs officer for the European Regional Medical Command, said the best way for parents to find out what their children need is to contact their local medical facilities. She said some facilities will allow children to just walk in and get shots; they&#8217;ll need appointments at others. Other facilities will hold special clinics to provide shots for children returning to school.