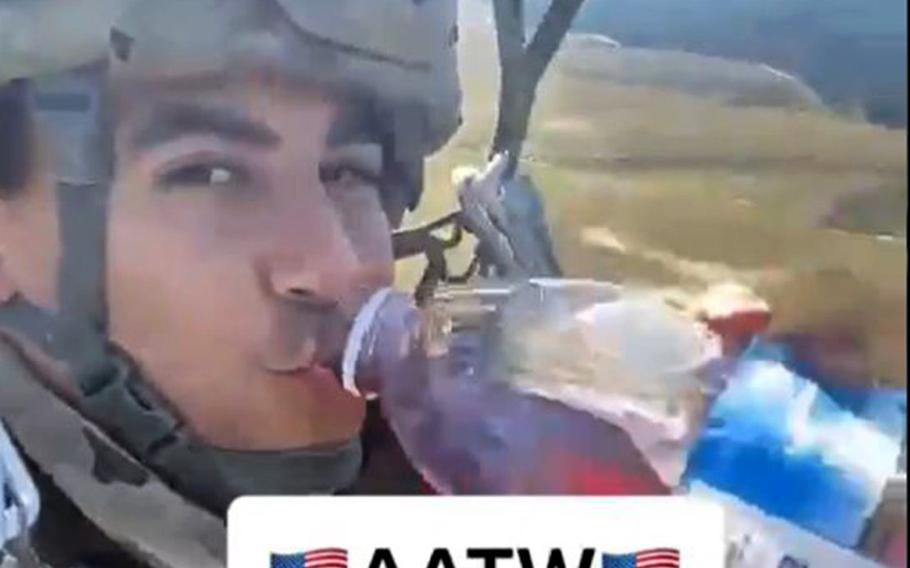 The Army is looking into a viral video showing a soldier drinking from an Ocean Spray juice bottle and lip-syncing the words of the Fleetwood Mac hit “Dreams” while on a daytime parachute jump.

“We’re looking into it,” the XVIII Airborne Corps said in response to the Twitter post by Task and Purpose’s Haley Britzky late Saturday.

The incident may be a safety violation, Col. Joseph Buccino, a spokesman for the Fort Bragg-based airborne unit, told Stars and Stripes on Monday. He could not identify the soldier in the video, he said.

“We should have this wrapped up by the end of the week,” he said of the informal inquiry.

The paratrooper’s video contains a text block with the acronym “AATW,” short for “Airborne All The Way,” covering the soldier’s name tape, but it appears to have been uploaded by a different soldier.

The video is part of a recent trend spurred by the popularity of a TikTok post by a user named Nathan Apodaca in which he was videoed cruising on a skateboard along an Idaho highway, drinking from a bottle of Ocean Spray Cran-Raspberry juice and lip-syncing to Fleetwood Mac’s 1977 hit.

The song shot back into the charts, and social media users — including band members Mick Fleetwood and Stevie Nicks, and Ocean Spray CEO Tom Hayes — tried to imitate, spoof or recapture the vibe of Apodaca’s original, which has been viewed over 60 million times and garnered over 10 million likes.

A version by troops flying in a military helicopter with a military working dog has also been viewed several million times after being shared on Twitter.

President Donald Trump has sought to ban TikTok in the U.S. over national security concerns about its owner, China’s ByteDance. Military regulations bar service members from using it on government devices, but they may use it on their personal phones.

The paratrooper’s video reminded several social media users of an incident in April 2015, when an Army specialist posted a selfie holding his pet Siamese fighting fish in a plastic water bottle during his last jump before exiting the Army.

Matthew Tattersall, the soldier in that incident, was ordered to write a 1,000-word essay about the importance of airborne safety and was later given 12 days of extra duty as part of company-grade nonjudicial punishment for the offense.

“Some Article 15’s are worth it,” wrote Twitter user Andrew Wittmer, sharing the paratrooper’s video on Twitter.