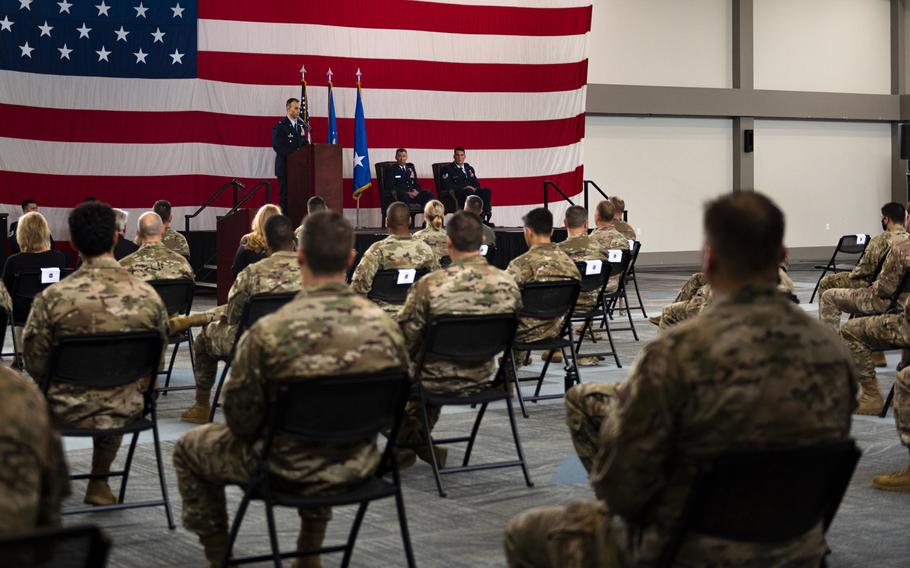 Lt. Col. Nicholas Morgans, commander of the 38th Rescue Squadron, speaks to attendees during a ceremony at Moody Air Force Base, Ga., on Oct. 29, 2020. During the ceremony, Staff Sgt. Nicholas Brunetto, a pararescueman with the squadron, received a Silver Star Medal for his actions in Afghanistan. (Taryn Butler/U.S. Air Force)

Lt. Col. Nicholas Morgans, commander of the 38th Rescue Squadron, speaks to attendees during a ceremony at Moody Air Force Base, Ga., on Oct. 29, 2020. During the ceremony, Staff Sgt. Nicholas Brunetto, a pararescueman with the squadron, received a Silver Star Medal for his actions in Afghanistan. (Taryn Butler/U.S. Air Force) 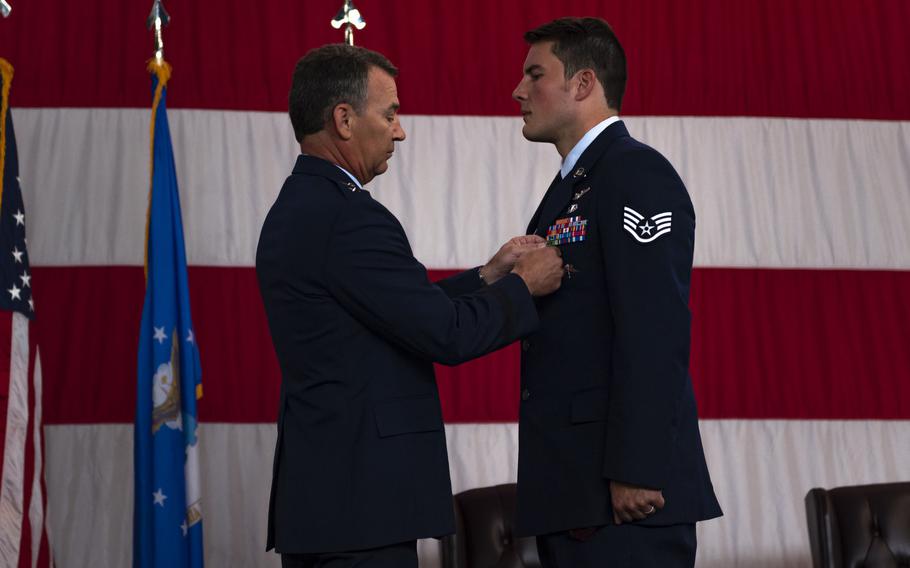 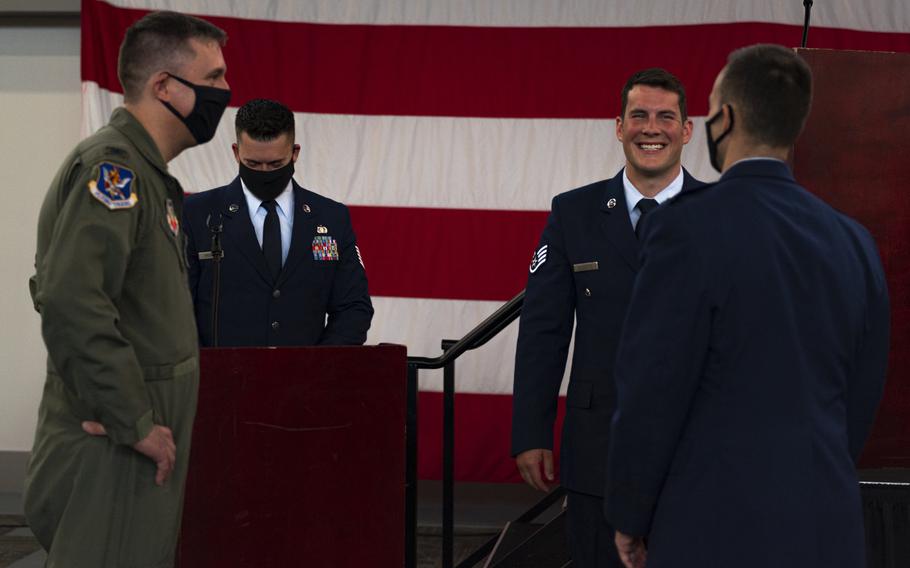 Airmen assigned to the 23rd Wing talk with Staff Sgt. Nicholas Brunetto, a pararescueman with the 38th Rescue Squadron, after he received a Silver Star Medal during a ceremony at Moody Air Force Base, Ga., on Oct. 29, 2020. (Taryn Butler/U.S. Air Force)

Staff Sgt. Nicholas Brunetto never expected to receive an award for his actions in combat with a Special Forces team ambushed in Afghanistan earlier this year.

“A lot of it was just being there and doing the job that I had volunteered for,” the pararescueman said in an Air Force video released last week. On Thursday, he received the Silver Star Medal for his lifesaving efforts in February.

The Americans and their Afghan colleagues were packing up their gear during the Feb. 8 mission when they came under machine-gun fire from an Afghan army soldier, said Brunetto, a member of the 38th Rescue Squadron.

“There was enough dust kicked up from everyone running and the shooting that you could not tell who was actually shooting,” he said. “You could see muzzle blasts still coming from the machine gun, as well as from other areas.”

Eight U.S. troops were injured critically in the attack along with three Afghan soldiers, an Air Force statement said. For one of the wounded, Brunetto realized that a blood transfusion was the only hope to save him, it said.

“Without regard for his own personal safety, [Brunetto] maneuvered back through incoming fire to retrieve vital medical equipment,” said a statement from the 23rd Wing at Moody Air Force Base, Ga.

Brunetto again braved enemy fire to help carry several of the 11 wounded troops to an extraction point for helicopter evacuation, it said.

Maj. Gen. Chad P. Franks, commander of the 15th Air Force, who presented Brunetto with the medal for combat valor in a ceremony on Thursday, praised his heroism, self-discipline, and the training and leadership.

“Today, we recognize the courage he had to act,” Franks said. “Nobody would deny Nick’s selfless service to America and his team that day.”

Brunetto thanked his chain of command, his team, his wife and his family for their support, and credited advancements in battlefield medicine with providing vital capabilities.

“The [people] there, myself and other guys who were able to do treatment did an amazing job and were able to keep everyone [who] was injured alive,” Brunetto said.

The attack occurred in Nangarhar province after the joint U.S.-Afghan force met with local leaders in the capital of Sherzad district, U.S. military officials had said at the time.

All of the troops that Brunetto treated survived, 23rd Wing spokeswoman Andrea Jenkins said via email on Monday, but two other Americans were killed in the incident. Earlier this year, officials also said one Afghan was killed.

For his bravery that day, Brunetto also was one of five service members named “Angels of the Battlefield” in a virtual awards gala last Wednesday. The other honorees at the annual event hosted by the Armed Services YMCA were:

• Sgt. 1st Class Kyle J. Wagner, a combat medic who treated casualties from a bomb blast in June 2013 despite his own injuries from the explosion;

• Petty Officer 1st Class William A. McGrath, a Navy corpsman who helped repel an enemy attack on a military airfield in Kenya where American troops were based and helped save the life of a wounded teammate last January;

• A Navy SEAL whose name and mission were withheld due to the sensitive nature of his deployment, but who had tended to more than 200 patients during an overseas mission from 2019 to 2020;

• Coast Guard rescue swimmer Petty Officer 2nd Class James A. Chandler, based in Houston, who saved a woman’s life by performing CPR for more than 30 minutes during Tropical Storm Imelda in 2019;

• and Regina Benson, 100, a woman in Virginia believed to be the oldest living Army nurse.