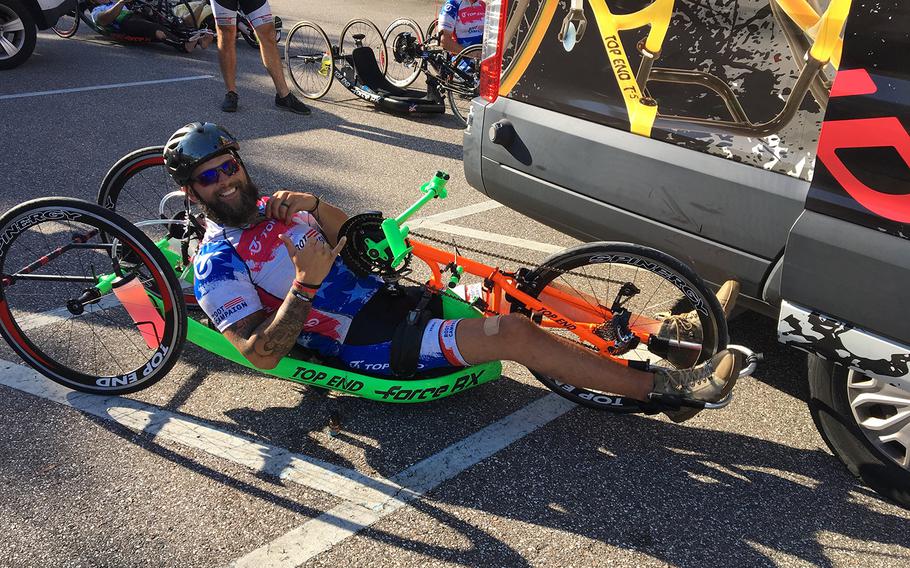 Ricky Raley is a paralyzed Army veteran who handcycles to raise awareness and money for a nonprofit organization that serves veterans. (Boot Campaign)

Road trips take on a whole new meaning when you’re talking about Ricky Raley, a paralyzed Army veteran who handcycles to raise awareness and money for a nonprofit organization that serves veterans.

He’s in the midst of his second Raley Road Trip handcycling journey to support Boot Campaign’s Health and Wellness Program, which provides veterans access to holistic providers who treat a variety of conditions. The 1,200-mile trek through four states kicked off April 13 in Dallas and is scheduled to wrap up Saturday in Fort Pierce, Fla. Along the way, he’s battled fierce hunger brought on by putting in lots of miles.

“They better have a whole hog ready, I’m gonna eat it all,” he said in a video from the 10th day of the journey in anticipation of a stop at a barbecue joint.

And the insects of Florida have not endeared themselves to him. “They are little devils,” he said in a video from the 12th day.

During his time in the Indiana National Guard, Raley deployed in support of Operation Iraqi Freedom, according to an Army statement. During a 2007 convoy in Iraq, his vehicle was struck by an improvised explosive device. Raley suffered a traumatic brain injury and was later awarded the Purple Heart. After returning home, Raley was involved in a truck accident that left him paralyzed.

For help with cognitive struggles, he went through the Boot Campaign’s Health and Wellness Program, which inspired him to try to help other veterans do the same.

“This journey is my way to give back and to help others who are struggling to overcome invisible wounds of war,” he said in Boot Campaign statement.

His journey is being documented using the hashtag #RaleyRoadTrip. More info on Raley’s fundraising effort is available at RaleyRoadTrip.com.